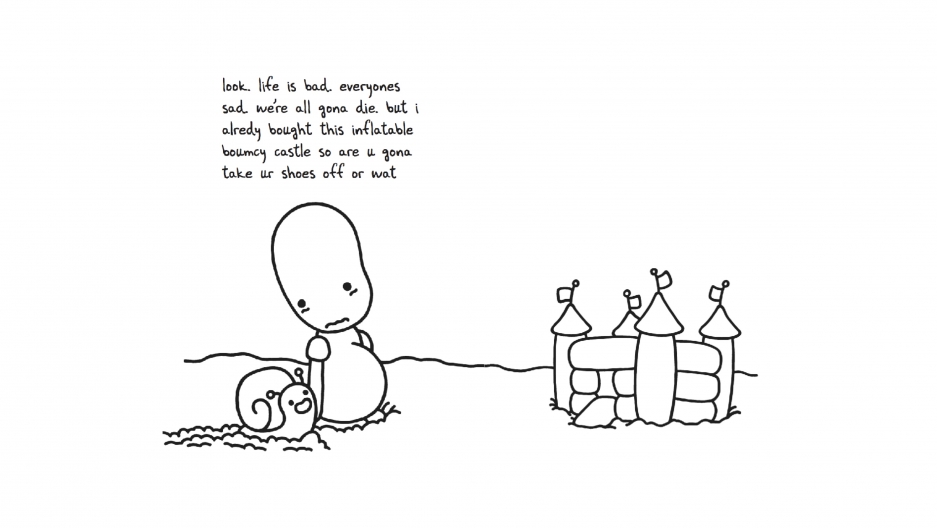 An excerpt from Jomny Sun's book, "everyone’s a aliebn when ur a aliebn too," is shown.

If an alien landed on Earth, how would it speak?

According to Jonathan Sun, a self-described “writer, illustrator and person from Twitter,” an alien would probably sound something like a curious toddler prone to typos.

Sun, who is a PhD student at MIT, is the author of the new book, “everyone’s a aliebn when ur a aliebn too,” a sort of children’s book for adults, filled with simple line drawings and existential one-liners.

He’s also a Twitter phenomenon, tweeting from the handle @jonnysun since 2009 (he goes by Jonny but his pen name and character's name is Jomny), with half a million followers, including celebrity fans like "Hamilton" creator Lin-Manuel Miranda.

Central to Sun’s humor is his unique writing style, riddled with misspellings and abbreviations.

For example, his Twitter profile reads: “aliebn confuesed abot humamn lamgauge.” The “aliebn” is Sun’s main alter ego, on Twitter and in his book — a lumpy-headed figure with a thick outline.

But these aren’t just accidental typos.

“I call this kind of misspelling or weird grammar ‘stylized verbal incoherence,’” said Gretchen McCulloch, internet linguist and co-creator of the podcast Lingthusiasm. “By adjusting the spelling, or the grammar, or how you put the words together, you’re indicating that you’re feeling so excited, or overwhelmed, or tired, or sad, or emotional in general that you can’t even string words together.” 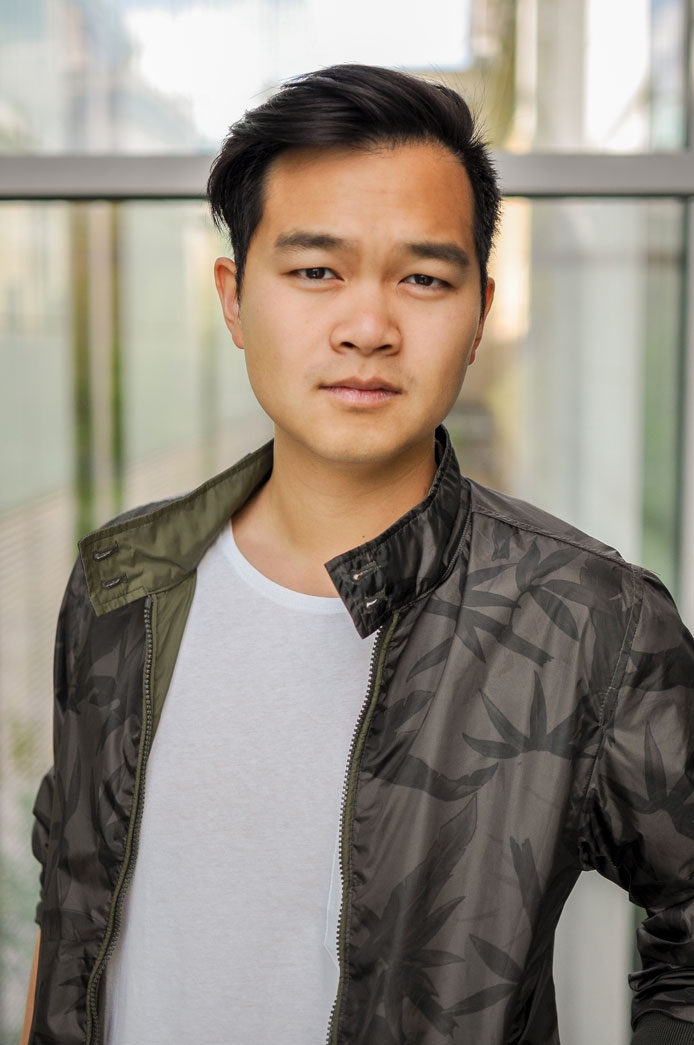 The child of Chinese immigrants, Sun was a self-professed “huge grammar nerd” growing up in Calgary.

“I don’t think it was ever intentional or super conscious of me, but part of my obsession with English was knowing that I was the person who was the ambassador for English in my family,” Sun said.

Sun follows intentional patterns in the way that he writes to come off as approachable, inserting and swapping some letters while removing others.

“It represents a finer fluency in a language to be able to play with it,” McCulloch said.

“Aliebn” speak has a very specific grammar, one that Sun had to write down in a style guide for his editor when he was writing his book.

Jomny Sun Style Guide for the World in Words (PDF)


Take the title of his book: “everyone’s a aliebn when ur a aliebn too.”

Aside from the more common shorthands, like “ur” for “your,” there’s an extra “b” in the word “alien.”

“A lot of the times when he’s adding an additional letter, that letter is a ‘b’ or an "m,"" McCulloch said.

In his style guide, Sun says that those letters are chosen because they’re adjacent to “n” on the keyboard — he said that he wants to emulate the “clumsy, fat fingers phenomenon” of trying to type on smartphones. But there’s something else about them, too.

“‘N’ is way more of a common letter than ‘m’ or “b,”” Sun said. “You’re not primed to seeing those letters as much, and it makes you slow down. It’s a cute letter, and often a silent letter, too.”

McCulloch also notes that “b” and “m” are what’s known as bilabials in linguistics — letters that are made by putting the lips together. Whether or not we pronounce the “b” in “aliebn” out loud, there’s something inherently appealing about bilabials.

“There’s something cute about those letters,” McCulloch said. “I think those are kind of cute because those are some of the first sounds that babies make, ‘ba-ba-ba.’ Not everyone pronounces it, but we may still have that connotation of it being a cute sound.”

Another “classic Jomny Sun tweet,” according to McCulloch, is one about an astronaut, where he exaggerates the space between certain letters: "i just want to go home" said the astronaut. "so come home" said ground control. "s o  c o m e  h o m e" said the voice from the stars.”

“I love spacing,” said McCulloch. “I kind of read it as slower or more ominous or looming sometimes. I think there’s a kind of vastness in the space between all the letters, in that final ‘so come home.’”

Repeating the last letters in a word, which is what people tend to usually do to emphasize something, has a different effect than spacing letters out. It comes across less like whining, and more serious.

In all his tweets and text, Sun writes in lowercase, and adopts some common internet shorthands — “ur” instead of “your,” for example.

But he’s also careful not to rely on too many shorthand text conventions, something he had to note to his editor in his style guide.

“I both wanted the language in the book to be strange and different and not too much like internetspeak,” Sun said. “I wanted it to be my own strange, unique style or voice.”

Grassley gained internet fame for his unfiltered, stream-of-consciousness tweets, particularly one where he reports hitting a deer on the highway in a manner-of-fact tone.

Fred and I hit a deer on hiway 136 south of Dyersville. After I pulled fender rubbing on tire we continued to farm. Assume deer dead

Grassley tweets are peppered with common internet shorthands (like "u" and "2" instead of "you" and "to").

Hey by the way have u thght of this? w all the work Senate has 2accomplish this fall NOW IS TIME 2cancel Oct district work period not Sept30

“His Twitter is unintentionally hilarious because he uses all these shorthand contractions and abbreviations that aren't really proper. It feels like he’s trying to cram the message in the tweets,” Sun said.

For Sun, it’s important that typos and broken spelling are always used as a tool to get people to laugh with each other — not at each other.

“As an Asian Canadian trying to be in comedy, I noticed that sometimes my identity kind of precluded what I wanted to do in comedy, like my race was used as the punchline,” Sun said.

As a result, he’s careful to avoid misspellings that might sound like those of a nonnative speaker.

“I wanted to avoid all those tropes. I wanted to avoid ESL humor tropes because those are always laughing at people. So for me, it was always about understanding the norms of proper English and trying to break those down in [a] very intentional way, to create a different voice.”

Ultimately, the goal of Sun’s writing and his tweeting is to connect with people. When I asked people on Twitter how Sun's tweets made them feel, one person wrote to me that an innocuous quote about an onion made her feel “less alone.”

All those misspellings and funny grammar choices are just a way to extend a virtual hand.

Check out the full interview with Sun on the World in Words podcast. Give it a listen by clicking the play button above or, better yet, subscribe at Apple Podcasts or wherever you get your podcasts.