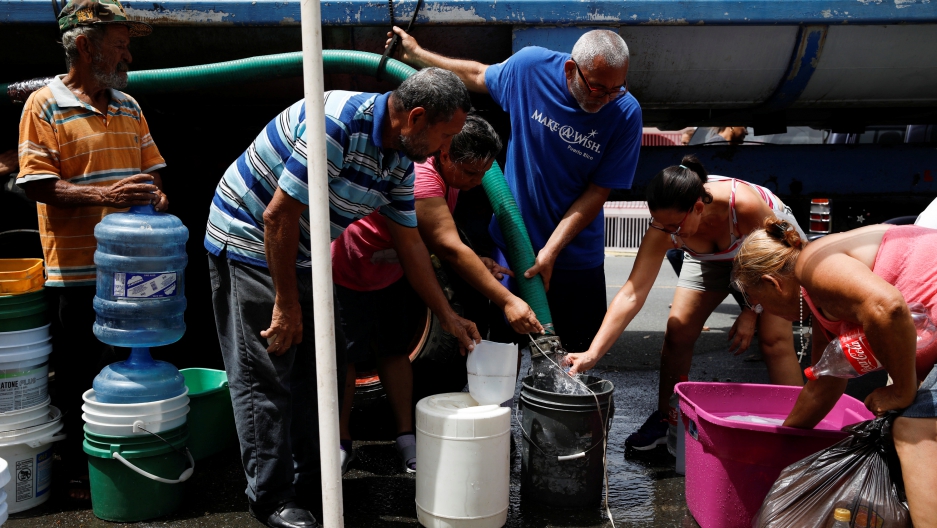 People queue to fill containers with water from a tank truck at an area hit by Hurricane Maria in Canovanas, Puerto Rico.

It’s been a week since Hurricane Maria hit Puerto Rico, damaging homes and roads and destroying the island's power grid.

The official count puts the number of people killed at 16, but hundreds of people are still missing, and families are desperate to hear news of their whereabouts.

What’s the best way to help?  The United States Agency for International Development suggests donating money, instead of goods, after natural disasters.

If you’re considering donating to an organization, do your research to make sure it's trustworthy. Charity Navigator is a great place to start.

Here are some options of vetted places to donate:

This organization has created a fund to send money directly to the PR Foundations Network, which includes hundreds of community non-profits in Puerto Rico.

A group of elected officials in New York, including New York City Mayor Bill DeBlasio, have partnered with the Hispanic Federation to launch the “Unidos” fund.

The chamber will match every dollar raised through its site.

The Center for Popular Democracy

One hundred percent of the money they raise will be used to support relief, recovery, and rebuilding in Puerto Rico’s hardest-hit communities.

The five living former US presidents have created a fund to help recovery efforts following hurricanes in Texas, Florida, Puerto Rico and the US Virgin Islands.

One donation of $28 will provide an emergency survival kit to a child in Puerto Rico.

This organization focuses specifically on the needs of families and children.

Without power, medical aid is desperately needed in Puerto Rico as hospitals struggle to keep up with demand. Consider donating to support emergency medical response teams.

This is not a comprehensive list of organizations providing aid after Hurricane Harvey. It may be updated. Consider recommending an organization in the comments below.