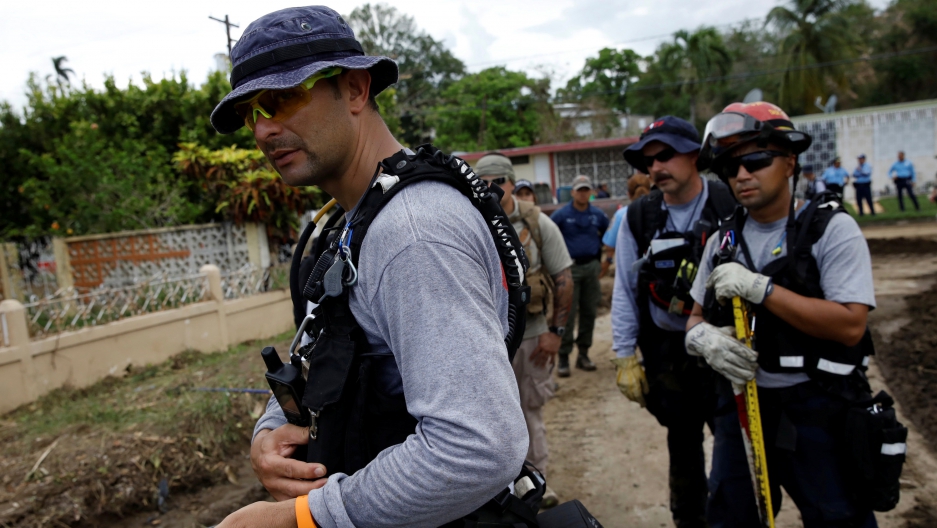 Members of the Federal Emergency Management Agency (FEMA) Urban Search and Rescue team conduct a search operation in an area hit by Hurricane Maria in Yauco, Puerto Rico, on Sept. 25, 2017.

“It’s been chaos here in Puerto Rico,” says Ezequiel Rodríguez-Andino, an independent radio producer in the capital, San Juan. The phones have been down, along with most internet service. The roads are blocked, and there are long lines for food, water and fuel, he says.

People are only now starting to understand the extent of the damage brought by Hurricane Maria. Rodríguez-Andino says he’s seeing some signs that help from Uncle Sam is on the way, though, with aid trucks moving through town and increased air traffic at the San Juan airport.

But there’s a long way before the recovery effort gets up to full speed.

For starters, most of the island’s 3.4 million people still don’t have electricity. And nearly half of the population doesn’t have access to clean drinking water.

From Washington, President Donald Trump has praised FEMA, the Federal Emergency Management Agency, for a job well-done in Puerto Rico.

“We have had tremendous reviews from government officials, as we have in Texas and Louisiana, and as we have in Florida,” Trump told reporters on Tuesday at the White House. “We right now have our top people from FEMA, and they have been there. We are unloading, on an hourly basis, massive loads of water and food and supplies for Puerto Rico.”

Trump pointed out that the emergency response effort was made all the more challenging by the fact that Puerto Rico is not part of the US mainland.

“This is, you know, a thing called the Atlantic Ocean. This is tough stuff,” Trump said.

The president has a point, says Samantha Montano, an emergency management expert who blogs at Disasterology.

“It definitely does create some logistical challenges,” Montano says. If the airport, the shipping ports and the roads are all damaged, she says the whole emergency response effort is going to slow down.

As for the criticism that the federal response to the hurricane damage in Puerto Rico has been poor, Montano says, “We’re still very much in the middle of this.”

“FEMA does have people in Puerto Rico,” she says. “But FEMA being in Puerto Rico is the not the same thing as people’s needs being met.”

Montano says she gives local leaders the benefit of the doubt when it comes to judging the effectiveness of the emergency response.

San Juan’s mayor, Carmen Yulín Cruz, told ABC News on Tuesday that FEMA officials in Puerto Rico are doing a good job. But she said people on the island are not getting what they need quickly enough.

“We are getting help, and we appreciate it so much,” Cruz said. “But the chain of command needs to work a little faster.” She said President Trump should let emergency response workers on the island “cut through the red tape,” and do more.

The initial phase of disaster response is underway, Montano says, but the response is going to take many years.

“It’s not just a matter of rebuilding a few homes,” Montano says. “This is a complete rebuilding of an entire island of 3.4 million people” that is likely to take a decade or more to complete.

Watson says it’s hard to blame people in Puerto Rico for being frustrated with the pace of the emergency response, especially because the communications infrastructure is so heavily damaged.

“People are really worried because they can’t find out how others are doing.”