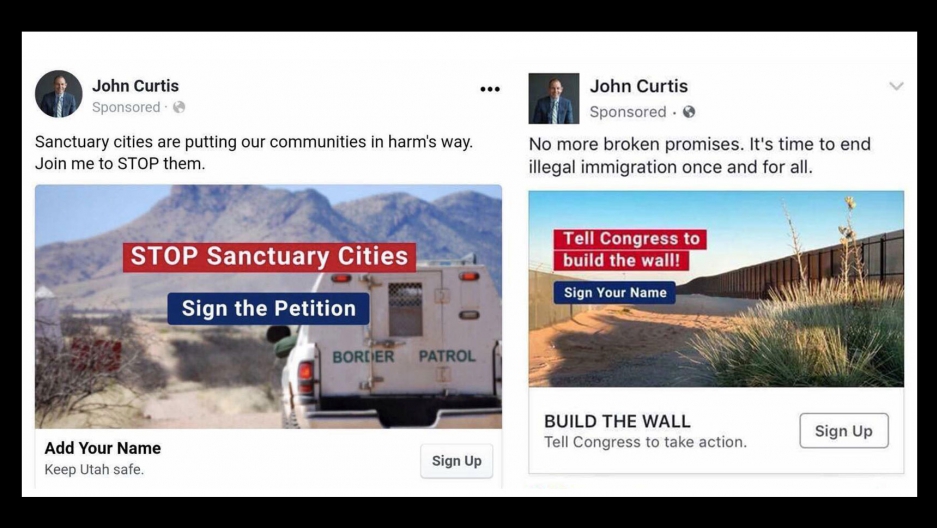 These are screenshots of ads that appeared on Facebook in September 2017. They appeared to come from congressional candidate John Curtis, the mayor of Provo, Utah. His campaign says the ads were made without the candidate's review, and they were discontinued on Sept. 24, 2017.

Laura López never actually saw the ad for herself.

She's lived in the US since she was a child and has built her family, business and life in Provo, Utah. And she uses Facebook a lot to engage with her community. An ad recently posted on social media by her town's mayor, John Curtis, came to her attention secondhand.

"When I saw the advertising, it hit me really hard because I wasn't expecting the mayor of the city that my family and I live in, the ward where I go, to have this hateful message come in the Facebook feed," she says. The ads are "taking a page from Trump" and "throwing us under the bus to get votes," she says.

López is a DACA recipient, part of the Deferred Action for Childhood Arrivals program for undocumented immigrants brought to the US as children — a program that the Trump administration has canceled. She was visiting her parents in Provo on Sunday when she heard about the ads.

Curtis is running for Congress to replace five-term Rep. Jason Chaffetz who resigned his seat in June 2017 and became a commentator for Fox News. Chaffetz was chair of the House Committee on Oversight and Government Reform and made aggressive inquiries into the Obama administration and presidential candidate Hillary Clinton, but declined to investigate Donald Trump's presidential campaign.

One of the Curtis ads, framed as a post made by him personally, said, "It's time to end illegal immigration once and for all." And an image that accompanied the text said, "Tell Congress to build the wall." A second ad said, "Sanctuary cities are putting our cities in harm's way. Join me to STOP them." Both invited people to click to sign a petition to support the causes.

López was not pleased. She wrote her point of view in a public Facebook group: "Here hoping that the new mayor aims for better, less xenophobic, less hateful and more 'Christian' rhetoric to get popularity and votes."

The mayor himself messaged her to start a dialogue: "I understand your concern with my Facebook post. May I call you and take must [sic] a minute of your time to give you some background? John Curtis."

She replied in a Facebook message that she would like to involve other activists who have felt "scared and hurt at this rhetoric." Curtis replied, "Let's meet. I'd be happy to sit down with you and others. I would also point out my record as mayor. I hope no one has felt threatened in Provo for the last eight years."

He also, she found out, messaged several others who had posted their discontent.

The 3rd district is in the southeastern part of the state. It includes Provo, a town of just over 100,000 people, and Orem nearby. Curtis is a Republican, and many voters saw him as a more moderate alternative to Chaffetz. Now, many worry that, if elected, he would fall in lockstep with the Trump administration. 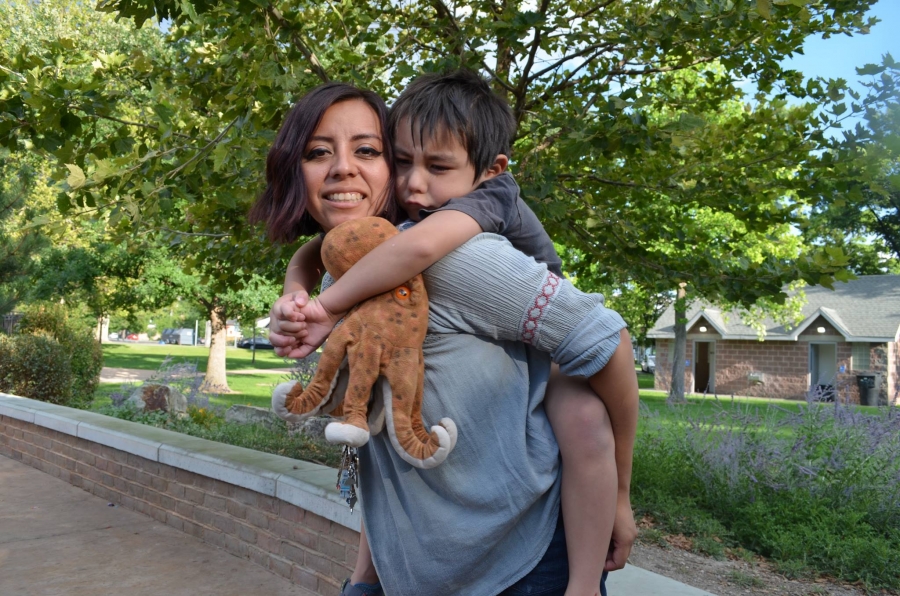 DACA recipient Laura López is shown outdoors with her 5-year-old son Antonio in Utah last month. She worries that her children will feel her anxieties about her immigration status.

López wrote her post at about 9 a.m. on Sunday. By 11 p.m., the campaign stopped running the ads and Curtis made a statement on his campaign Facebook page.

"My recent Facebook post about building the wall has rightly caught many people off guard. I’ve always been an advocate of not using divisive words and it’s clear that our team underestimated how contentious 'The Wall' was," he wrote.

Campaign spokesperson Danny Laub says that the posts were made by the campaign without the mayor's approval. Curtis, he says, has not yet decided how he would vote on Congressional measures related to a border wall if he is elected. And while Curtis does not support the idea of sanctuary cities — they vary from one locality to another, but often include local law enforcement not detaining immigrants for federal agents without a warrant — he did not approve of the tone of the second ad. Laub declined to comment on how the error was made or to whom the ads were targeted.

"He owns things, and he's owning that it wasn't approved by him," Laub says. "He is committed to doing what's right for Utah. If that lines up with what Trump is doing, he's supportive of that. If not, he's going to let everyone know."

And Curtis, 100 days into his campaign, wants to use this as an opportunity for dialogue, to make the best decisions for his constituents, Laub says.

López doesn't buy that the Curtis campaign could have made such an error. "He knows what he's doing — he's a politician," she says. She's also not sure if the mayor can really be swayed by discussion or if he's already made up his mind.

In his statement, Curtis went on to clarify his immigration position, namely that border security is crucial — "If the best idea to protect our country is a wall then I will wholeheartedly support it" — and that "we need to be tough on those that commit multiple or serious crimes." He also said he is in favor of "restitution." "We need to give people a chance to get right with the law," he wrote. And finally, he explained his position on sanctuary.

"If we were to look at a continuum we would see sanctuary cities on one end flanked by rounding up all illegals and sending them back on buses on the other side," Curtis wrote. "Neither is the right approach. We can’t continue to pretend we don’t have a problem."

A special election to fill the vacant House seat in Utah's 3rd district is on Nov. 7, 2017. A Republican has held that seat for more than 20 years. Forty-seven percent of the vote there in the presidential election went to Trump. Curtis is running against Democrat Kathie Allen and Jim Bennett of the United Utah Party.

In the meantime, López is organizing with groups of activists — some who want to protest and others who want to see a dialogue. She's going to hear them out before deciding whether to speak directly with Curtis.

"If I do one thing, is it going to be counterproductive to the other?" she wonders. Either way, she wants Curtis to rethink his positions on immigration.