A migrant ship on the Black Sea is rescued by the Romanian coast guard.

During World War II, Romania’s Jewish refugees, fleeing extermination in Europe, would pay to cram aboard flimsy boats crossing the Black Sea to the Middle East. In 2017, Romania’s shores have been the recipient of migrant boats traveling the journey in reverse, as a rarely-used smuggler’s passage is reactivated.

The beaches of Greece and Italy have been a waypoint for more than a million migrants and refugees crossing the Mediterranean to Europe in recent years. Thousands have died, including more than 2,500 just this year.

Meanwhile, Romania’s Black Sea coastline remained quiet. In 2015, one boat of 68 migrants arrived. In 2016, it was just one person — a Belarusian man who was found floating on a homemade vessel allegedly aiming for Latin America. Romania is also far enough east that it was mostly avoided by refugees traveling from Turkey to Germany along the path that became known as the “Balkan route.”

This summer has been different.

On Sept. 13, the Romanian coast guard rescued an overcrowded fishing boat containing 157 migrants from Iraq and Iran, including 56 children, which was battling high winds. It was the fifth such boat to arrive from the Turkish shores in little over a month, bringing the total sea arrivals to Romania in 2017 to just under 500. On Sept. 22, a Romania-bound boat capsized off the northern Turkish coast, drowning at least 25.

“The day we left on the boat was a very black day for me. We sailed for 40 hours and the engine stopped twice. We thought we would all die. When I arrived, I was put in detention for four days, which is worse than jail. Even the open center is also dirty, crowded and people are sick. If I had known Romania was like this I wouldn’t have come."

In the last year, Europe’s borders have become ever more militarized, and European Union officials have paid vast sums to the Turkish government and warring militia in Libya to prevent refugees from leaving via the Mediterranean. In response, smugglers have been forging more complex routes to ferry people to Europe, including sneaking rickety boats past the coast guards of Turkey, Bulgaria and finally Romania.

The recent boat arrivals have prompted speculation that the Black Sea is opening up as a perilous new corridor into Europe, though such observations may be premature.

“There have been previous irregular maritime movements here,” said Loretta Jesudoss, a protection officer for the UN refugee agency’s Bucharest office. “What we see in terms of numbers is what was occurring in 2014 [when 433 arrived], though the frequency is higher and there are many families.”

It’s a dangerous journey to make.

Outside a dilapidated reception center in the Bucharest suburbs, Zoran*, a teenage Iraqi Kurd, showed photos of people sprawled out on the deck of a crowded boat surrounded by glistening open sea. Several children on his vessel were treated by coast guard medics for dehydration. Zoran grabbed his throat and mimed gasping.

“Three days at sea and no food or water!” he said.

Seywan, 34, an Iraqi Kurdish builder, also described a hard trip — one followed by a difficult reception in Romania.

“The day we left on the boat was a very black day for me,” he said. “We sailed for 40 hours and the engine stopped twice. We thought we would all die. When I arrived, I was put in detention for four days, which is worse than jail. Even the open center is also dirty, crowded and people are sick. If I had known Romania was like this, I wouldn’t have come. Even the police said to me, ‘This country is poor, why would you come here?’ Still, if this country can give me a life, I will stay.” 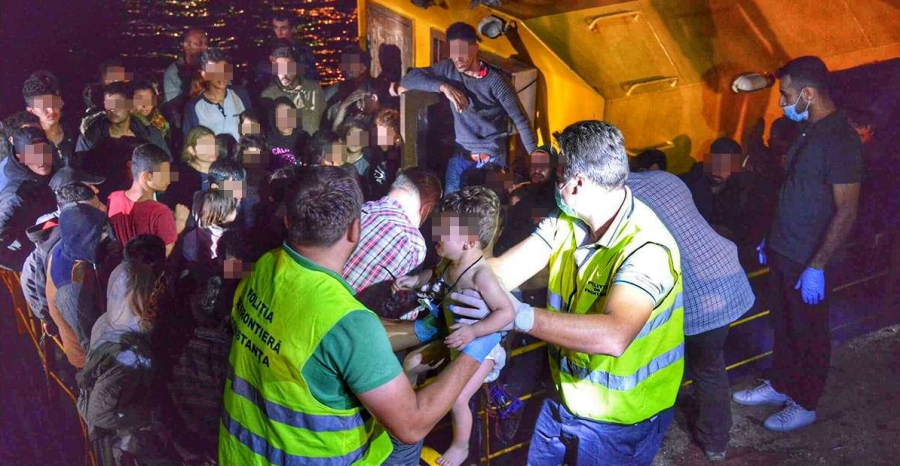 Romania has also become a more appealing land route to the rest of Europe, since Hungary choked off the “Balkan route.”

Romania’s western neighbor has a decidedly blunt approach to migration. It constructed a double fence — razor wired and electrified — on its border with Serbia. It has detained asylum-seekers in metal shipping containers and border guards have beaten migrants caught illegally crossing.

In response, some refugees have diverted through Romania. As of July, 2,800 people have been apprehended by Romanian police on the land borders, compared to almost half that amount for the whole of 2016. In August, two Afghan migrants suffered serious injuries after Romanian border police opened fire on a smugglers’ car that broke through a checkpoint at high speed.

Those who claim asylum in Romania are usually hosted in open reception facilities. Those who don’t are put into “public custody” — essentially a detention center. Asylum-seekers in Romania receive about $3 per day for food and are allowed to begin working three months after submitting their application.

For migrants using Romania as the first stop on their journey, it doesn’t always make sense to apply for asylum there.

“Some say they are moving onwards and they have no interest in applying for asylum as they have family members elsewhere in Europe,” Jesudoss explained. “There is also this perception that the grass is greener on the other side.”

Zoran said his family paid smugglers $3,000 to sail from Turkey. (Others paid up to $5,000.) They say they intend to remain in Romania, but if they do, they’ll be an exception. The country has just a few small migrant communities, an underdeveloped asylum system and is one of the poorest countries in Europe. Most of Romania’s boat refugees are leaving as quickly as they arrived, to seek opportunities elsewhere, following hundreds of thousands of Romania’s own citizens.

Romania participates in an EU scheme that legally relocates some eligible refugees from the overburdened states of Italy and Greece. Since the plan’s inception, Romania has received about 700 out of a commitment to relocate 3,500. Most are thought to have left.

Related: What it's like aboard an NGO ship rescuing hundreds of migrants in the Mediterranean

But not all refugees eschew Romania. Mohamad Zatari and Mehdi Aminian, both exiled musicians from Syria and Iran, respectively, have lived in Bucharest for about three years, collaborating with musicians from across Europe on a fusion of musical styles. They’re enjoying the Romanian chapter in their lives but understand that the country remains largely unknown to most refugees.

“I think from the psychological perspective of refugees,” Aminian says, “maybe one of the reasons some don’t want to stay is because of the prestige of telling friends, ‘Hey, we managed to get to Germany,’ and if they stay here they feel like a loser even though the life might be a lot better for them here.”

Zatari thinks, regardless of the country, Europe and the new wave of refugees are yet to develop their relationship.

“There is a lack of cultural exchange in Europe,” he says. “Most refugees are being assimilated, rather than integrated, and neither side is learning from one another.”

Romania will need to face this reality sooner or later, even though most migrants seem determined to move on to other EU countries. Under EU laws, asylum-seekers are usually fingerprinted at the first EU country they enter, meaning they can be sent back from other countries to the ones where they first registered. As more migrants are fingerprinted in Romania and abscond, it’s possible that the migrant population in the country could increase with returnees.

“The political system here needs a lot of improvement, not just for refugees but for Romanians so maybe their last priority is to provide some ground for the newcomers,” Aminian says. “But I tell people here that they need to prepare for this. Every year climate change and wars will worsen and these people will have to go somewhere. It’s a matter of life and death for them and Romania is one of the gates.”

*The names of asylum-seekers have been changed to protect their identities.