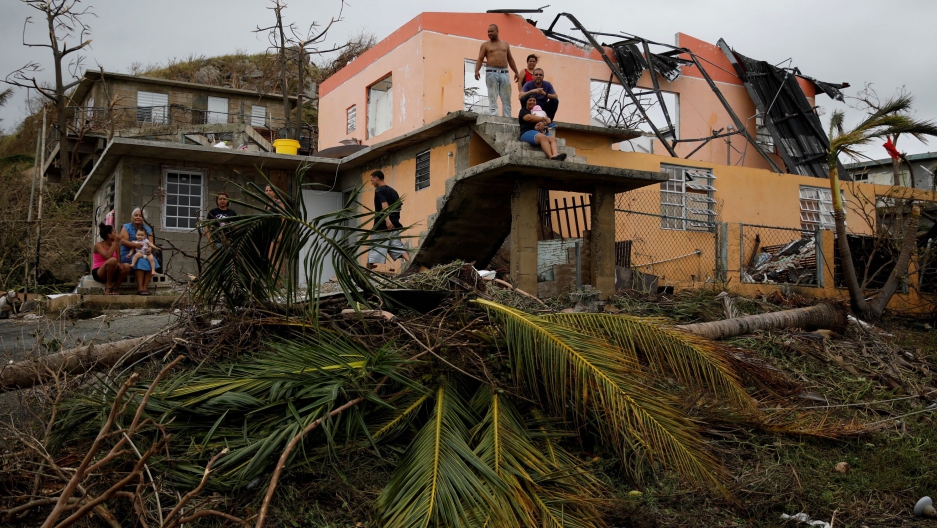 People rest outside a damaged house in Yabucoa.

Over the weekend, President Donald Trump spent his time criticizing athletes who protest during the national anthem, all while Puerto Ricans struggled to find gas and water, and their governor pleaded for aid.

On Friday, a dam failed along the Guajataca River, causing extreme flooding, and the island's delegate to Congress, Jenniffer González, says the storm has set Puerto Rico back 20 to 30 years.

Ricardo Rosselló, Puerto Rico's governor, called for more aid from the Trump administration and Congress on Sunday night and compared the crisis to the aftermath of hurricanes Katrina and Sandy.

“This is a humanitarian disaster involving 3.4 million US citizens,” Gov. Rosselló said Monday in a statement. “We will need the full support of the US government. People cannot forget we are US citizens — and proud of it.”

Samantha Schmidt, a reporter for The Washington Post on the ground in San Juan, says that millions remain without power.

“It’s pitch-black, and it’s actually pretty scary driving through the streets,” says Schmidt. “I’ve only been in the San Juan area at night and try to avoid it at all costs.”

Officials have imposed a curfew on the island from dusk till dawn.

“There’s a lot of looting — it can get pretty scary out there,” Schmidt adds. “Police are everywhere, as far as I know, and I know that the governor actually made it so that the justices can serve as peace officers. ... He’s really boosting those law enforcement numbers.”

According to Schmidt, some towns have begun to ration food as grocery stores are unable to meet demand.

“Going to the gas station, if there’s a gas station, takes an entire day because the lines are so long,” she says. “They were probably wrapping half a mile down the highway in this town yesterday at the one gas station that was working. People are camping out at night, sleeping in theirs [to get gas].”

In addition to food and fuel, some Puerto Ricans are running out of bottled water and money.

“This is very common around the island — there’s no way to find cash, and then once you have cash, you’re out of gas, so there’s no way to even drive to the grocery store, and once you’re there, you’d be spending the whole day there,” she says.

Frances Robles, a reporter covering the Caribbean and Central America for The New York Times, says the situation is “dire.”

“There are so many people in so many different places who are suffering,” Robles says. “Let’s keep in mind that there’s an islandwide power outage that also comes with no water. Even if your house was not affected, how long can you live like that?”

According to Robles, the authorities don’t seem angry about the lack of aid, but they are exasperated.

“What I’m seeing — I’m seeing a lot of need,” she adds, saying that she sees echoes of the crisis wrought by Hurricane Sandy in 2012.

“You’re seeing problems in so many different places, whether it’s flooding, roofs having been blown off, the lack of water, just different kinds of problems in a lot of different paces,” she says.

This story originally ran on The Takeaway.