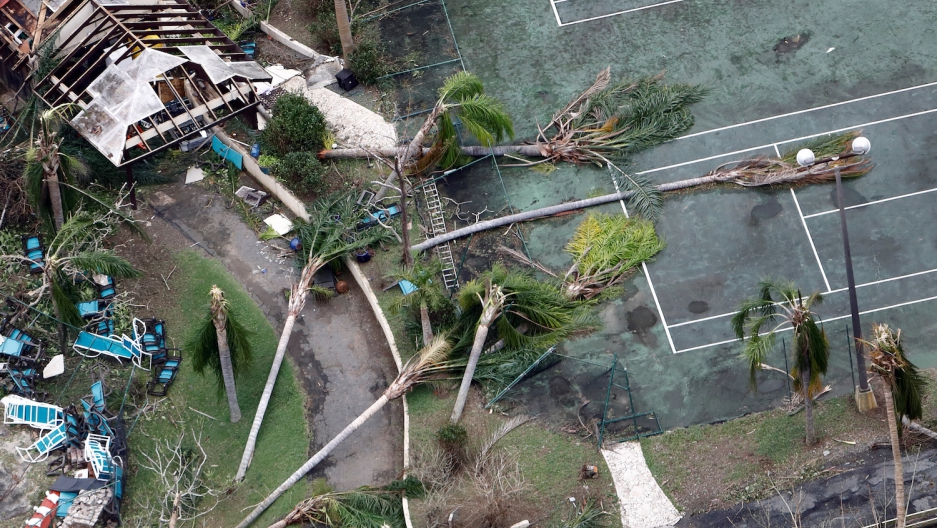 One of the scenes on Sept. 21, 2017, after Hurricane Maria battered St. Croix, one of the US Virgin Islands.

Here's the latest on Hurricane Maria sweeping across the Caribbean:

Puerto Rico battled dangerous floods Friday after Hurricane Maria ravaged the island, as rescuers raced against time to reach residents trapped in their homes and the death toll climbed to 33.

Puerto Rico Gov. Ricardo Rosselló called Maria the most devastating storm in a century after it destroyed the US territory's electricity and telecommunications infrastructure.

"Part of the island is lacking communications so what we have are some preliminary assessments about 13 deaths at this juncture," Rosselló told CNN.

"Right now our efforts are to make sure we have everybody safe, that we can rescue people. Our efforts have already produced almost 700 rescues so we're clearly focused on that."

The National Hurricane Center said some areas in Puerto Rico could see 40 inches of rain from Maria, and Rosselló warned of dangerous mudslides brought on by the deluge.

"We have a lot of flooding, we have reports of complete devastation of vulnerable housing. Of course it's still raining over here."

Maria has been blamed for at least 33 deaths, including 15 in Dominica, three in Haiti and two in Guadeloupe.

After lamenting that Puerto Rico had been "absolutely obliterated" by Maria, US President Donald Trump spoke with Governor Rosselló on Thursday night when he promised to speed up emergency relief efforts.

Although the southeast coast suffered the worst damage, no part of the island escaped the storm's wrath, including the capital San Juan where there was widespread flooding.

The city's mayor, Carmen Yulín Cruz, said the biggest need was reaching vulnerable people who are stranded in their homes to give them emergency medication and supplies.

"Yesterday we were canvassing and we found elderly people that don't have blood pressure medicine, food," she said.

"I got an SOS from [an elderly home] and it was a text like from a horror movie. It said if anybody can hear us, please, we are stuck here and we can't get out and we have no power and we have very little water left. We got there just in time."

The torrential rain had turned some roads into muddy brown rivers, impassable to all but the largest of vehicles.

Toppled trees, street signs and power cables were strewn across roads that were also littered with debris.

Puerto Rico's electricity network has been crippled by the storm and engineers say it could take months for power to be fully restored.

The local electricty board has promised that their priority will be to restore power to hospitals, water treatment plants and pumping stations.

Brock Long, who heads the US federal government's emergency management agency FEMA, said that ships carrying millions of emergency meals and bottled water were trying to dock as the island's ports are slowly reopened.

As of early Friday, Maria was a Category 3 hurricane with winds of 125 mph, churning in the sea some 35 miles east of Grand Turk Island in the Turks and Caicos.

The government opened new shelters after several buildings which had been used during Hurricane Irma earlier this month were damaged and authorities feared they might not hold up under another fierce storm.

In the Dominican Republic, the heavy rains triggered flooding as rivers overflowed their banks.

High winds downed trees and electrical pylons, and 140,000 people were left without power, the government said. Some 17,000 have been evacuated from their homes.

Maria has already torn through several Caribbean islands, claiming the highest toll on Dominica, which has a population of around 72,000 and has been largely cut off from the outside world.

AFP aerial footage showed debris from damaged buildings scattered across the island and many structures with their roofs ripped off. Trees were snapped in half or torn out of the ground.

Residents on Thursday were busy shoveling mud from their homes and businesses, while laundry was hung out to dry on the frames of half-destroyed homes and along downed utility cables.

Skerrit appealed for desperately needed supplies and helicopters to ferry them to cut-off communities.

"These hurricanes are becoming stronger than ever and more powerful than ever... And we really need, all of us, to understand that these issues are of greater concern to small islands like ours.

"We are very very vulnerable," said Skerrit, who himself had to be rescued during the hurricane which blew off the roof off his home. ​