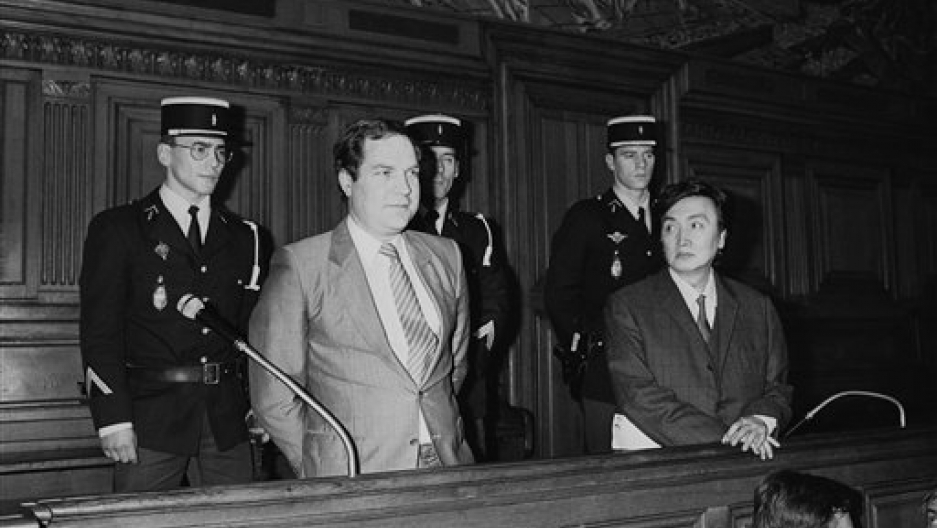 Former French embassy employee Bernard Boursicot, 41, left and Shi Pei Pu, 47, a singer in Chinese traditional opera face the judge as their trial began in Paris, May 5, 1986. Bouriscot is accused of having given Chinese officials unclassified diplomatic documents while assigned at the French embassy in Beijing from 1961 to 1972 and Shi Pei Pu, is accused of being his accomplice. Boursicot thought for nearly 20 years that his male lover Shi Pei Pu was a woman who bore him a child.

When Vincent Lancisi and his wife were traveling in the south of France earlier this year, they began chatting with their driver. And he told them a story about his former employer.

“He said, ‘I was a driver for a famous man,’” Lancisi said. “‘You probably don’t know his name but there’s a movie about him made with Jeremy Irons called 'M. Butterfly.'"

“My wife looked at me, her jaw dropped.”

Lancisi was already slated to direct "M. Butterfly," by David Henry Hwang this fall at Everyman Theatre in Baltimore, where he’s the artistic director.

It’s the tale of a French diplomat in Beijing who falls in love with a female Chinese opera singer who turns out to be a spy — and a man.

When Lancisi told his driver about his production, the man put him in touch with his old boss, Bernard Boursicot, one of the central figures in the "M. Butterfly" story.

This fall, Broadway is also mounting a revival of the Tony Award-winning play with Clive Owen. Broadway might have a Hollywood star and a big budget, but Lancisi and the lead actor from the Everyman production got the chance to meet the French embassy worker who inspired the story.

“From the moment I had Bernard Boursicot on the phone, I just said, 'I can’t imagine what it must be like where the vast majority of the world has passed judgment on you based on a work of fiction about your life,'” Lancisi says.

This past summer, Lancisi returned to France with the lead actor, Bruce Nelson, to meet Boursicot. He’s 83 now and lives in a retirement home in a small town in Brittany.

Back in the 1960s, Boursicot was a 20-year-old accountant at the French embassy in Beijing. He met a male opera singer named Shi Pei Pu at a Christmas party. They became good friends, and Shi invited Boursicot to his house one evening.

“He started to explain a story, which was traditional in China,” Boursicot said.

“In my journal, I wrote. 'Revelation! Revealed!'” Boursicot said. “Everything in my head changed.”

A few days later, they had sex for the first time, Boursicot said.

So, how is it possible Boursicot did not know he was having sex with a man? Shi would later show doctors in a court-ordered medical exam how he could create the illusion that he was female. And Boursicot pointed out that their intimate moments were always in the dark.

Perhaps Boursicot was naive, or he just found the lie more exciting than the truth.

But that’s not the end of it.

By this time, Boursicot, the embassy employee, had already begun passing French documents to the Chinese government to help Shi climb the Communist Party ranks.

He eventually left Beijing for another diplomatic post. When he returned for a visit, Shi had bought a child and passed him off as their son.

In 1983, they were arrested in France on charges of espionage. To this day, Boursicot claims he didn’t know his lover was a man until it was revealed in court.

They were both convicted and given prison sentences, though Shi spent less than a year behind bars. At the time, Boursicot was so devastated he cut his throat. He still has a faint scar.

“It was funny because there were people crying behind me, and I wanted to say, 'Don’t cry so much. I am still alive,'” Boursicot said, laughing. He laughed often while telling his story. And at first, it seemed jarring. He also avoided most questions about his relationship with Shi by frequently derailing the conversation with jokes and unrelated stories full of name-dropping and exotic locations.

Boursicot seems to get a kick out of the fame and attention, though he says he doesn’t like the way the "M. Butterfly "narrative has taken over his story. He gave many interviews years ago, so I asked him why he still keeps agreeing to do more.

In the end, Boursicot said, he felt betrayed by Shi, who also enjoyed the spotlight.

Boursicot said he no longer feels anything for Shi, who died in 2009.

After Lancisi and Nelson said goodbye, they tried to reconcile the fictional protagonist in "M. Butterfly" with the man they had just met. But even after five hours with Boursicot, Lancisi said he still has a lot of questions. And that’s OK.

“I feel like there’s even more mystery now about the man than there was before I met him,” Lancisi said on the train back to Paris, “which is fabulous because it only enforces what the play already puts out there.”

Lancisi added, “I think he wanted us to see Bernard the man.”