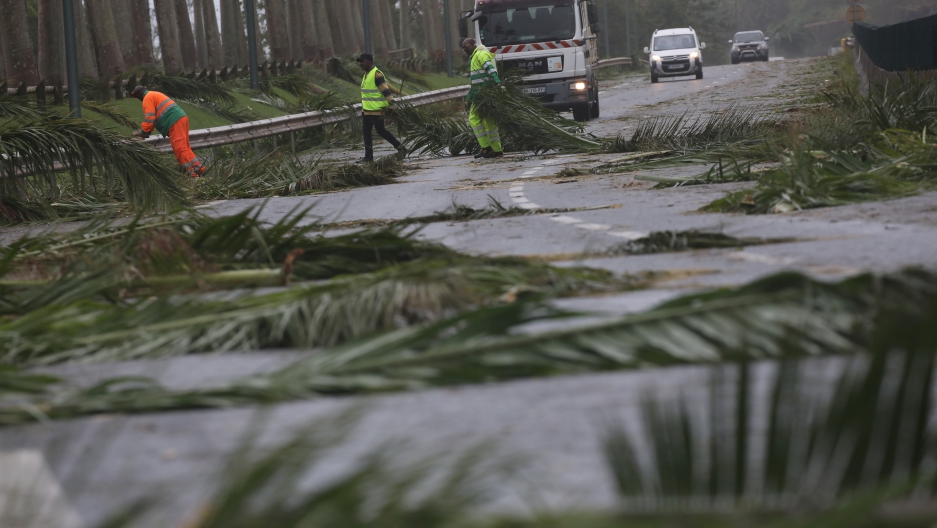 Workers remove fallen tree branches from a road in the Guadeloupe island which was hit this week by Hurricane Maria. The storm made landfall in Puerto Rico on Wednesday.

Hurricane Maria slammed into Puerto Rico on Wednesday, cutting power on the US territory as terrified residents hunkered down in the face of the island's worst storm in living memory.

After leaving a deadly trail of destruction on a string of smaller Caribbean islands, Maria made landfall on Puerto Rico's southeast coast around daybreak.

Although engineers had managed to restore power to most of the island after the recent Hurricane Irma, Maria knocked the power back out. ABC News reported that "100 percent of Puerto Rico is without power."

CNN also reported the blackouts. "We are 100 percent without power," the Puerto Rico governor's office told the network.

"The wind sounds like a woman screaming at the top of her lungs!" photographer and storm chaser Mike Theiss wrote on Twitter, sheltering in a safe room in the eye of the storm.

"We are getting absolutely hammered right now," he added, posting pictures of walls collapsing in a local restaurant.

Many of the most vulnerable of Puerto Rico's 3.5 million residents took cover in the 500 shelters set up around the island, with officials warning of life-threatening floods.

"As we anticipated, this is the most devastating storm in a century or in modern history," said Puerto Rico Governor Ricardo Rosselló.

"We have many fronts of danger, not only flooding regions, which we have plenty here in Puerto Rico, coastal lines where the surge is coming," Rosselló told CNN.

"Also we have mudslide potential and vulnerable housing — we are talking wooden housing and so forth."

Brock Long, who heads the US federal government's emergency agency FEMA, warned it could take some days for power to be restored on Puerto Rico and the smaller US Virgin Islands which have also been badly hit by Maria.

"Because of the nature of the geography of the islands, it's a logistical challenge so it will be a frustrating event to get the power back on," said Long.

"We are well positioned. We have more assets on the islands than before Irma hit. We have 3,200 staff members in the islands collectively. We have multiple days' worth of commodities, meals, water, and other things ready to go."

Maria made landfall as a Category Four storm on the five-point Saffir-Simpson scale, packing winds of 150 mph (240 kph).

The US and British Virgin Islands — still struggling to recover from the devastation of Irma — are also on alert, along with the Turks and Caicos Islands and parts of the Dominican Republic.

Maria has already torn through several Caribbean islands, leaving two people dead in the French territory of Guadeloupe and causing major damage on the independent island of Dominica.

In the US Virgin Islands, locals reported horizontal rain and trees swirling in the wind.

"We can hear debris banging on the aluminium windows as well."

In Guadeloupe, one person was killed by a falling tree as Maria hit, while another died on the seafront.

At least two more are missing after their boat sank off the French territory, while some 40 percent of households in the archipelago of 400,000 were without power.

Communications to Dominica have been largely cut, and its airports and ports have been closed.

But an adviser to Prime Minister Roosevelt Skerrit, who spoke to the premier by satellite phone, painted a picture of devastation on an island that is home to around 73,000 people.

"Many buildings serving as shelters lost roofs, which means that a very urgent need now is tarpaulins and other roofing materials," Hartley Henry said in a statement.

Reports from rural communities spoke of a "total destruction of homes, some roadways and crops," added Henry.

While there have been reports of a handful of deaths on Dominica, Henry said it was too early to give a figure.

There had been fears that Maria could wreak fresh havoc on islands that were already flattened by Category 5 hurricane Irma earlier in the month.

Reports suggested St. Martin, a French-Dutch island that was among the most severely hit by Irma with 14 dead, had escaped the worst this time around.

Britain, France and the Netherlands had boosted resources in their Caribbean territories ahead of Maria, after heavy criticism of poor preparations for Irma.

All three European countries have increased their troop deployments to the region after complaints of looting and lawlessness after Irma.

French President Emmanuel Macron told the UN General Assembly in New York that the lethal sequence of hurricanes — Irma and Maria came after Harvey blasted through Texas — was "one of the direct consequences of global warming."

The French leader is pushing US President Donald Trump to reverse his decision to pull out of the 2015 Paris climate accord, which triggered an international outcry.