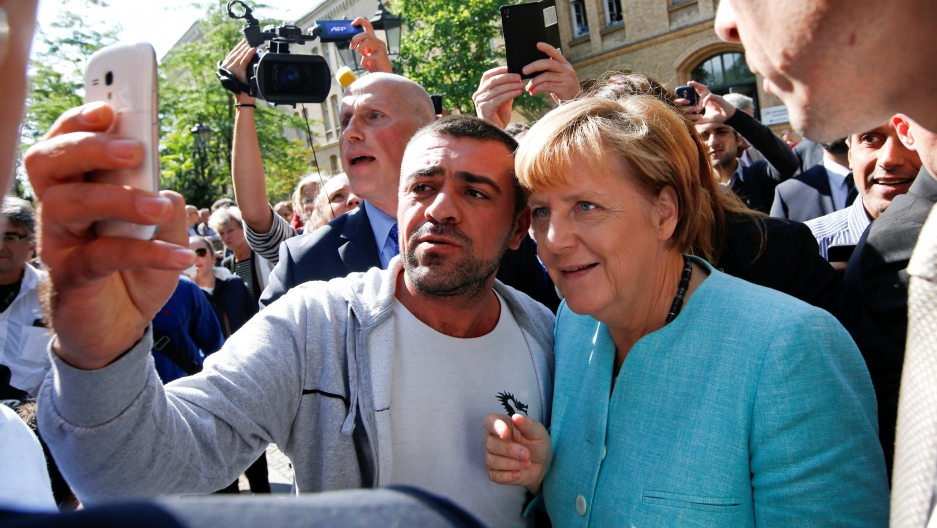 A man who identifies himself as a migrant takes a selfie with German Chancellor Angela Merkel outside the Federal Office for Migration and Refugees in Berlin, Germany, Sept. 10, 2015.

Cultures converge on Sonnenallee, the main thoroughfare of Berlin’s southeastern borough of Neukölln.

The German capital’s trademark hipsters, wearing black and sporting tattoos and piercings, duck in and out of craft coffee shops and boutique bistros. A few traditional German pubs are scattered along side streets. But the lion's share of restaurants and shops cater to Arab and Turkish clientele.

About half of the borough's 325,000 residents have an immigrant background, according to census data.

For some Germans, those demographics aren’t “German” enough.

"There are too many immigrants,” said one local man who refused to disclose his name as he strolled on Sonnenallee recently. “Walk a kilometer south and you won't find any more German-owned shops."

With federal elections set for Sept. 24, immigration and integration are on the minds of voters in Neukölln and throughout Germany.

Two years after Chancellor Angela Merkel opened Germany’s borders to refugees fleeing war and other humanitarian crises in Syria and elsewhere, more than 1 million migrants have entered the country.

About 50 percent of German voters say the refugees are the most pressing issue facing the nation, according to a recent poll by public broadcaster ZDF.

The government has taken important steps in integrating newcomers, said Thomas Bauer, chairman of the Expert Council of German Foundations on Integration and Migration, a nonpartisan think tank, but there are still "a lot of problems in the details."

Integrating refugees into German society could take as long as eight years, he added. "I don't know whether this is made clear enough to the public," said Bauer.

After a controversial repatriation deal with Turkey, the number of newcomers has significantly decreased. About 150,000 refugees have registered for asylum so far this year, as compared to over 700,000 in 2016 and nearly 450,000 in 2015, according to government statistics.

Children are slowly but steadily emerging from "welcome classes" and are integrating into a regular school schedule with similarly aged German students. Young Syrians and others from the priority states of Eritrea, Iraq, Iran and Somalia are finishing state-run language and integration courses and are seeking to enter the job market.

A volunteer conducts German language lessons for refugees and migrants inside an improvised shelter at a sports hall in Hanau, Germany, Sept. 24, 2015.

"Myself and other Syrians still have a lot of work to do here in Germany," said Baraa O., who arrived in Berlin from Daraa, Syria, in 2015. He asked that his name last name be withheld over concerns for his personal safety.

Baraa can now speak German proficiently, an accomplishment that's helped him find work at a cellphone shop in Berlin. His job somewhat matches the education he received in Syria as a telecommunications engineer. But he's looking to shore up his skills and eventually begin a second degree program at Berlin's Technical University.

"I still have to study a lot, and that's difficult for me," he said. “But I feel supported by the government.”

Despite the progress, many Germans feel that Merkel has set a bad precedent. They're skeptical of her promise that 2015's mass influx won't repeat itself.

"Merkel has handled a very complex topic too simplistically," said Berliner Thomas M. at a cafe on the Sonnenallee. He asked that his last name remain off the record, a custom among privacy conscious Germans when speaking to the press. "This isn't a problem that will be solved anytime soon."

"There is a dual task of integration: to integrate those who are new to us, but also to stand by those who already live here," said Foreign Minister Sigmar Gabriel in a recent interview with German daily Bild.

Controversy surrounding refugees has been good for the far-right, anti-Islam and anti-immigration party, Alternative for Germany, or AfD. Garnering support by sharply criticizing Merkel's refugee policy, the party will likely surpass the 5 percent threshold necessary to enter parliament on Sept. 24. It would be the first time a far-right party has accomplished such a feat in Germany in the post-World War II era.

"After the AfD enters parliament, they'll continue to wage a debate about what continued immigration and integration means for the future of the federal republic," said Florian Hartleb, a political analyst and expert on right-wing extremism in Berlin.

Mainstream parties have in turn tailored their campaign platforms to address growing concerns about migrants among voters.

Merkel's conservative Christian Democrats and most other German parties are pushing for a new immigration law geared toward addressing the country's need for qualified skilled labor while also ensuring that newcomers adopt German language and culture.

The chancellor's party is also developing economic partnerships with North African nations to halt smugglers from bringing people across the Mediterranean. Branded as Germany's "Marshall Plan for Africa," such partnerships have been labeled unethical by critics who believe Merkel is negotiating with authoritarian regimes for a quick fix to a hot-button election issue.

"It's cynical that Mrs. Merkel is suggesting humanitarian accommodations for refugees in Libya while fully knowing that these standards won't be reached in the foreseeable future," said co-chair of Germany's Green Party Simone Peter in a recent interview with German daily Die Welt.

The plan would also likely increase migration in the short term, said Bauer.

"One of the main factors influencing immigration is that an individual can finance it,” he said. “If you increase the monetary wealth in these countries, many will first get the means to leave for Europe.”

Despite those criticisms, Merkel will likely win a historic fourth term next week. Her Christian Democrats lead their nearest competitor by 17 points, according to the latest poll by German broadcaster ARD.

For Hanadi M., 37, the chancellor's aloof, technocratic persona is too cold. But she thinks Merkel's policies show heart and have helped the desperate migrants.

Hanadi is herself a refugee, having fled Lebanon with her parents 28 years ago. She also asked that her last name remain undisclosed.

She grew up in Berlin and struggled to navigate the restrictions placed on refugees to study and go to university. She's still fighting to get her German citizenship and works as a point person between newly settled refugee families with children and schools in Neukölln.

As politicians battle over the correct way to deal with newcomers, Hanadi said Merkel has provided more opportunities to refugee children.

"It was different for me, but today I think that at some point down the road these kids will have the same chances to succeed as everyone else," she said.