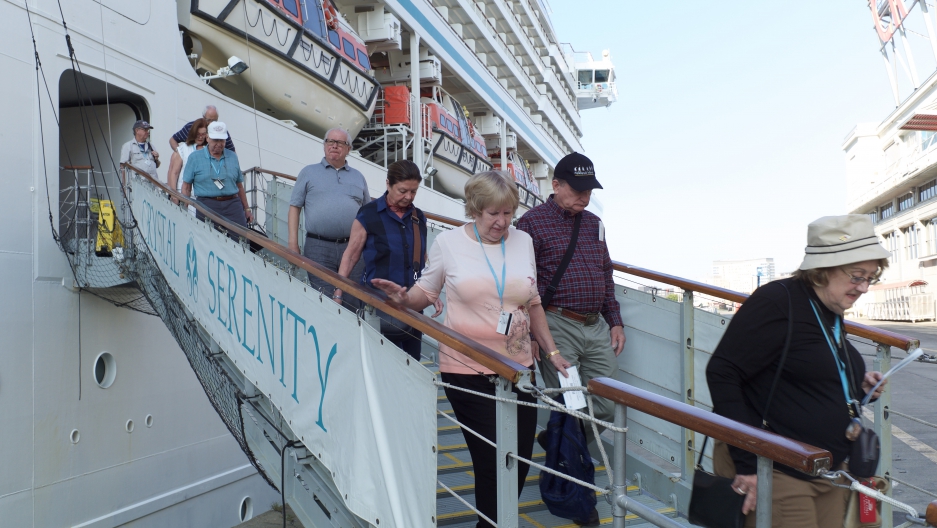 Passengers disembark from the Crystal Serenity on a stop in Boston after cruising through the Northwest Passage.

When a massive luxury cruise ship docked outside the tiny Inuit town of Cambridge Bay this summer, it doubled the population of the town for a day.

“It was just jaw-dropping to think that the same amount of people that are in Cambridge Bay could fit onto that ship,” said Mia Otokiak, 21, a lifelong resident of the small, largely Inuit town in the Canadian province of Nunavut.

The Crystal Serenity, a 13-deck cruise ship carrying more than 1,700 passengers and crew, stopped there this August for the second time during a repeat of its historic 2016 voyage through the Northwest Passage.

The Serenity is by far the largest passenger ship ever to ply the waters of the Northwest Passage, from Alaska through the Canadian Arctic Archipelago and on toward Greenland.

The sea route was completely ice choked and impassable until the turn of the last century. Melting ice has opened it up to some ship traffic, but until last year only smaller, expedition-style cruise ships had made the journey.

The Serenity's arrival in Cambridge Bay last year was preceded by months of planning by residents of the small town, where the gravel roads dead-end at the edge of town and supplies have to be shipped in by boat.

“When I first heard that the Crystal Serenity was coming here ... I [had] mixed feelings,” Mia Otokiak said. “My biggest negative is always just how much traffic that’s bringing into our ocean that we use.”

The Crystal Serenity dropped anchor outside the town last month, and Otokiak’s grandmother, Eva Kakolak, 67, watched as passengers were shuttled from the beach to town in taxis, buses, and pickup trucks driven by volunteers.

Several cruise ships now stop here each summer, but the Serenity was by far the largest, and a frequent topic of conversation.

“The elders always say, 'Why are these big cruise ships coming through our path?' Kakolak said. “They always worry about the water, because we get our food from the water ... seals, fish, whitefish, walrus.”

Increased ship traffic brings concerns about water quality, but tourists also bring cash to this remote town that sits above the Arctic Circle. 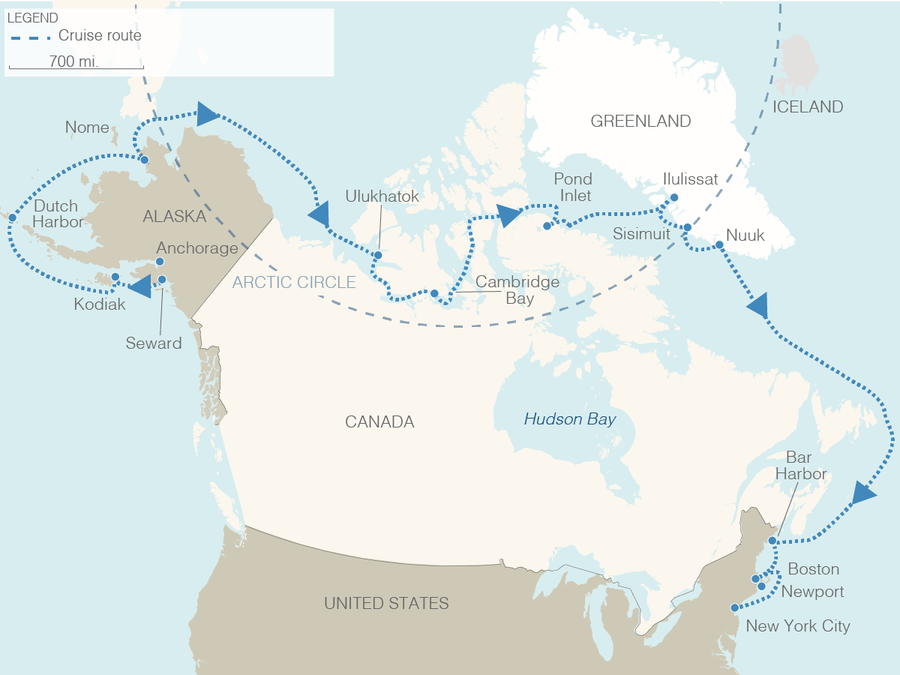 Cambridge Bay hosted art fairs each of the last two years for visitors getting off the cruise ship and streaming into town. Last year, Otiokiak helped two of her uncles sell their carvings and paintings, bringing in thousands of dollars.

“Both of them had families that they had to feed, both of them didn’t have jobs,” Otokiak said, “so it was really, really nice to see that, because of the Crystal Serenity, they got to make a lot of money for their families.”

Otokiak and Kakolak draw a direct connection between increased tourism in Cambridge Bay and climate change, which has melted sea ice enough to allow for leisure travelers to navigate a sea route that used to be deadly.

But many of those who saw changes in the Arctic on the cruise did not make the same connection. 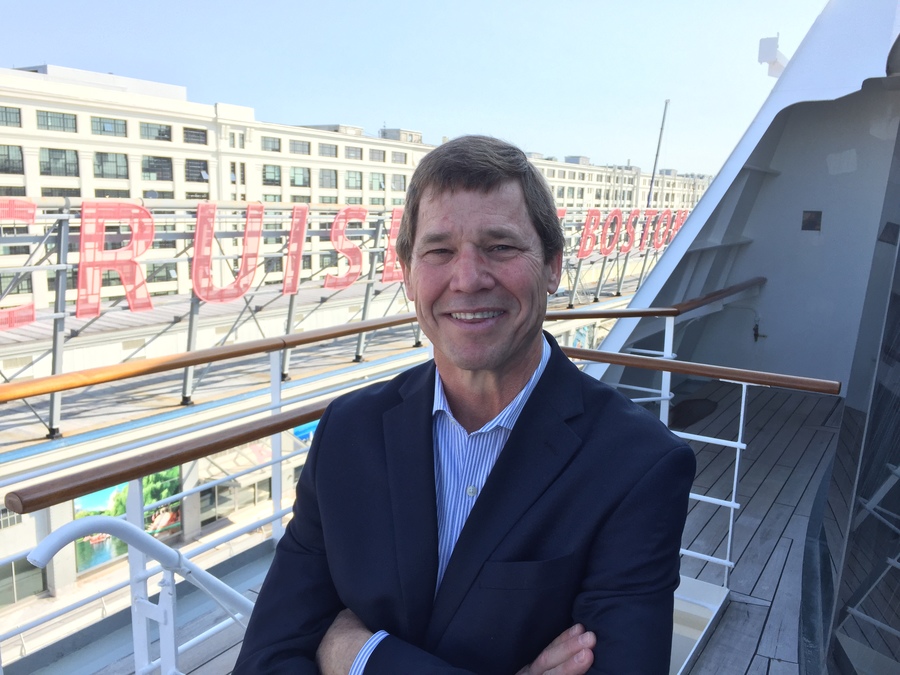 John Stoll, vice president of Crystal Cruises, on board the Crystal Serenity in Boston Harbor.

“I’ve never really thought of it in [those] terms,” said Crystal Cruises Vice President of Land Programs John Stoll, when asked how he felt about his company making money off of climate change.

“We were lucky with the ice,” Stoll said. “Ten years, 15 years ago, we never would have been able to make the journey. But I think exposure to the region gives us a better sense of what’s happening.”

Passengers did have a front-row view of climate change on the 32-day journey, which ended in New York on Saturday.

“You see how many of the glaciers are retreating. I’ve seen it for myself, with my own eyes,” said Estelle Siteman of St. Louis, who camped out in Greenland for a night during the cruise. “I feel incredibly lucky that I have seen this in my life. I want other folks to be able to see this, and I worry that it won’t be a possibility.”

Siteman said she was in awe of the sculpturelike sea ice she saw while cruising through the Arctic, likening it to Gaudi’s towering Sagrada Família cathedral in Barcelona.

“I don’t ever think I want to go to the Caribbean again; I’m in love with the ice!” Siteman said when the Serenity stopped in Boston, near the end of its trip.

Safety and environmental concerns give way to longer-term worries

Preparing for the first-of-its-kind cruise last year took years of planning and kept one United States Coast Guard official up at night.

“I don’t want a repeat of the Titanic,” Adm. Charles D. Michel, the vice commandant, said at the Global Leadership in the Arctic conference in Anchorage two years ago, as reported by The New York Times. “This is a complex operation in a very environmentally sensitive and, frankly, navigationally difficult area, and the weather is incredibly treacherous there, logistics very difficult to deal with.”

As the cruise ship passed through the Arctic last year, the Coast Guard, Royal Canadian Air Force and Alaskan state officials staged a massive search and rescue simulation in the Bering Strait.

Crystal used a grade of fuel oil that would have been easier to clean up in a spill and exceeded regulations for wastewater discharge.

That first voyage through the Northwest Passage in the summer of 2016 went smoothly, and this year’s repeat trip was met with less fanfare. 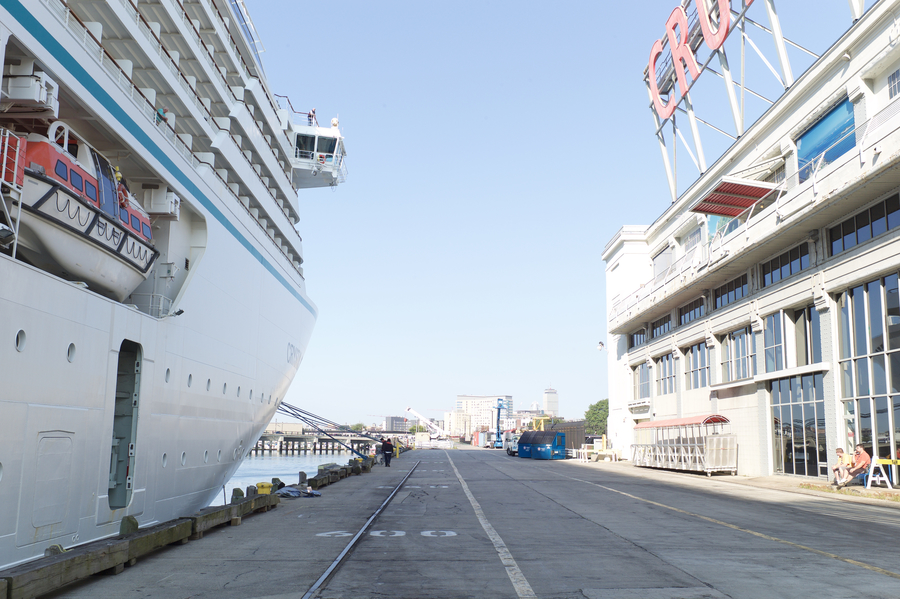 The Crystal Serenity docked at the Boston cruise terminal near the end of its 32-day Norhtwest Passage journey.

One on-ship conservation expert praised the company for steering clear of an area known to be home to narwhals, out of respect for local First Nations communities.

But many Arctic experts worry this voyage signals the beginning of a new era of mass tourism through the remote north, an area where rescues and cleanups would be hard to stage.

"We're concerned that there are going to be other companies looking at this and saying, 'Oh, that looks easy,'" Jeffery Hutchinson, deputy commissioner of strategy and ship building for the Canadian Coast Guard, told the Canadian newspaper The Globe and Mail last year. "They may not have the resources or the experience to put the planning into a further voyage."

An uptick in tourism in the far north is just one way life is changing for those who live there.

Winters are getting shorter.

And her granddaughter Mia Otokiak explains that the permafrost, or the layer of ground that’s perpetually frozen, is starting to melt in places in and around the town of Cambridge Bay.

That means it’s harder for Otokiak and others to leave town on ATVs to hunt, fish, camp and visit ancestral grounds.

“The permafrost is melting and causing huge cracks in the earth,” Otokiak explains. “There’s some cracks that are probably like six feet [deep], and if you fell in there with a quad, your [ATV] would be totaled,” Otokiak said.

Both Otokiak and Kakolak worry about the future of their community on the front lines of climate change, but they remain cautiously optimistic.

They’re hoping that their family and the town of Cambridge Bay can adapt to the changes as they come — from melting ice and permafrost to the new waves of tourists who arrive as the ice disappears.