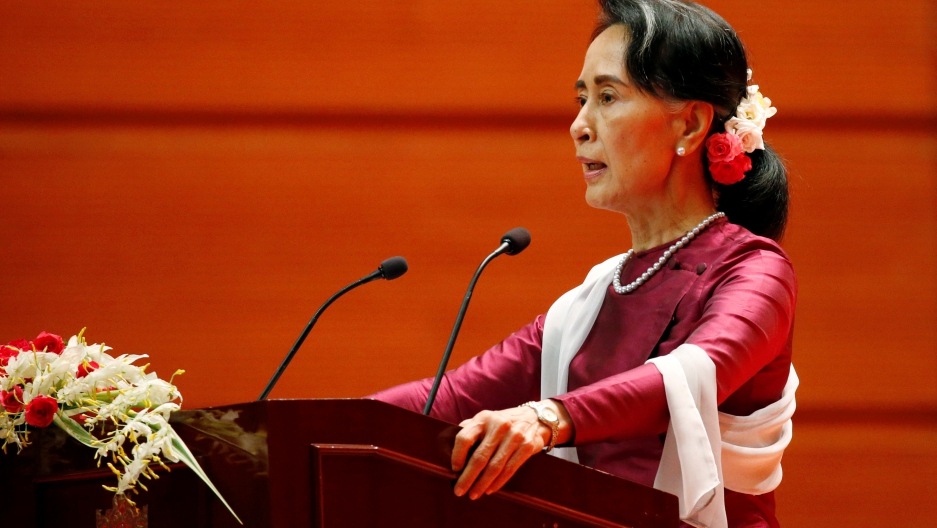 Myanmar State Counselor Aung San Suu Kyi delivers a speech to the nation over Rakhine and Rohingya situation, in Naypyitaw.

It’s been more than a month since members of a Rohingya militant group attacked police outposts in northern Myanmar, killing 12 people.

The attack led to a massive Myanmar military crackdown on the Rohingya, a Muslim ethnic minority that is denied equal rights and widely despised by the Buddhist majority.

About 400,000 Rohingya have fled across the border into Bangladesh since then, with reports of burning villages and mass killings. A UN official called the Rohingya crisis "a textbook example of ethnic cleansing."

Aung San Suu Kyi, the famous Nobel Peace Prize winner and de facto leader of Myanmar, finally broke her silence on the plight of the Rohingya people Tuesday, but she’s been criticized by many in the international community once again for refusing to acknowledge the Myanmar military’s role in creating the crisis.

“She is not acting like a beacon of hope for democracy, in my book. Nor is she protecting the human rights of all of the people of Myanmar,” says fellow Nobel laureate Jody Williams.

Williams received the Nobel Peace Prize in 1997 for her work with the International Campaign to Ban Landmines and was one of five laureates who wrote Suu Kyi a letter urging her to stand up for the Rohingya people.

The second time, Suu Kyi was free and met with members of the Nobel Women’s Initiative, including Williams, who asked her questions about human rights in Myanmar.

A young Burmese woman who considered Suu Kyi a hero also attended the meeting, Williams, says, “and when it ended — unpleasantly — the poor young woman just burst into tears, and said ‘I cannot believe that this is Aung San Suu Kyi.’”

You can listen to Nobel laureate Jody Williams' full interview above.