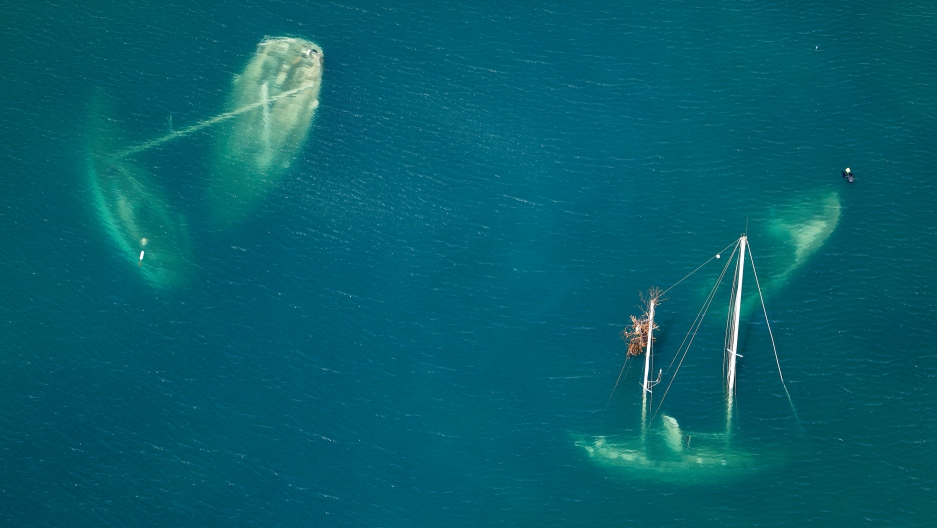 These vessels sank on St. John, US Virgin Islands, during Hurricane Irma. Hurricane Maria could bring 20 inches of rain to the US and British Virgin Islands and Puerto Rico, leading to flooding and mudslides. And Guadaloupe, a key staging ground for post-Irma recovery efforts in the Caribbean, is in Maria's path as the storm strengthens.

Hurricane Maria strengthened to a Category Three storm on Monday as it bore down on Caribbean islands still recovering from megastorm Irma.

The Miami-based National Hurricane Center said Maria was packing maximum sustained winds of 120 miles per hour as it approached the French territory of Guadeloupe, the base for relief operations for several islands hit by Irma this month.

Guadeloupe was on "red alert" Monday with schools, businesses and government offices ordered to close, as was neighboring Martinique, which is also part of France. Each has a population of around 400,000 people.

The hurricane is expected to hit Guadeloupe at around midday local time (1600 GMT).

Dominica, St. Kitts and Nevis, Montserrat, St. Lucia and the US and British Virgin Islands are also on alert.

French Interior Minister Gerard Collomb warned in Paris on Sunday that "we will have major difficulties" if Guadeloupe is hard hit, noting the territory was "the logistical center from where we could supply St. Martin and organize all the airlifts."

Irma killed 15 people on St. Martin, an island shared by France and the Netherlands.

France, Britain and the Netherlands have been criticized for the pace of relief efforts and for struggling to contain lawlessness in their overseas territories amid widespread shortages of food, water and electricity after Irma.

"We have a culture of risk, we know what needs to be done," she said.

Collomb said an additional 110 soldiers would be deployed to the region to reinforce about 3,000 people already at work tackling security problems, rebuilding infrastructure and supplying food and water to hurricane-hit islanders.

He said up to 500 more people could be sent if needed.

Irma, a Category Five hurricane, left around 40 people dead in the Caribbean before churning west and pounding Florida, where at least 20 people were killed.

As of 1200 GMT the storm was swirling about 85 miles east of Martinique, according to the NHC, on track to barrel across the eastern Caribbean late Monday and into the night.

Tropical storm warnings were in place in Antigua and Barbuda, Saba and St. Eustatius, and St. Lucia.

The tiny island of Barbuda was decimated by Hurricane Irma on September 5-6 when it made its first landfall in the Caribbean as a top-intensity Category Five storm.

The NHC said Maria could produce a "dangerous storm surge accompanied by large and destructive waves" that would raise water levels by four to six feet when it passes through the eastern Caribbean.

It also forecast maximum potential rainfall of 20 inches in the Leeward Islands, Puerto Rico and the US and British Virgin Islands through Wednesday night — conditions that could cause life-threatening flash floods and mudslides.

A second hurricane, Jose, is also active in the Atlantic and has triggered tropical storm warnings for the northeastern United States.

Irma broke weather records when it whipped up winds of 183 miles per hour for more than 33 continuous hours.

Many scientists are convinced that megastorms such as Irma, and Harvey before it, are intensified by the greater energy they can draw from oceans that are warming as a result of climate change.