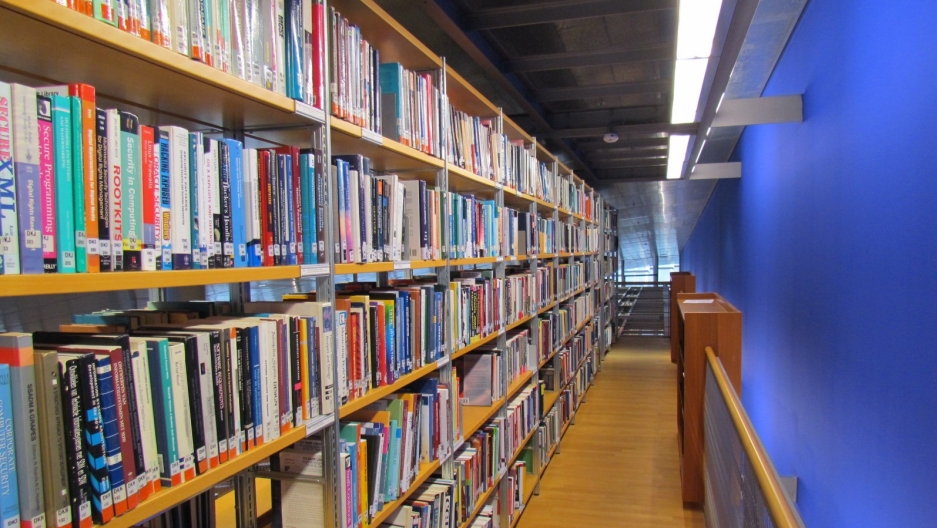 This image shows books in a library.

In July, a new law took effect in Florida, and it concerns what’s in the state’s schoolbooks.

HB 989 allows any Florida resident to “challenge the use or adoption of instructional materials,” and its supporters say the law gives Floridians a greater say in what students are taught. But some in the scientific community worry the new law will be used to target evolution and climate change in classrooms.

“My group, Florida Citizens for Science, has been tracking this for quite some time now,” says Brandon Haught, a co-founder of the organization and a high school environmental science teacher.

Under the new law, once a resident files a complaint about school materials, the school board must hold a hearing that is overseen by a review officer who is not employed by the district. “Then that hearing officer makes a recommendation to the school board,” Haught explains, “and it’s the school board that still makes that final decision.”

Media stories about HB 989 have focused on the law’s fallout for science education, Haught says, because his group “has brought it to the public’s attention.” And Julie Palakovich Carr, public policy manager at the American Institute of Biological Sciences, says science was mentioned in a number of affidavits filed during the legislative process. “Some of the supporters of the bill made very clear that the teaching of evolution or of climate change was really their big concern and why they thought this legislation needed to be enacted,” she says.

In one example, the Orlando Sentinel reports that a Martin County resident objected in her affidavit to an Advanced Placement textbook’s presentation of evolution as fact. “The vast majority of Americans believe that the world and the beings living on it were created by God as revealed in the Bible,” the woman wrote.

The lawmaker who introduced the bill, state Rep. Byron Donalds, did not immediately respond to Science Friday’s request for comment. The bill was championed by a group called Florida Citizens’ Alliance, which collected affidavits and helped draft the bill.

As the group’s co-director Keith Flaugh told the Naples Daily News, “We want kids to get a balanced view of the world, not an indoctrinated view of the world.” Elsewhere, he’s elaborated further, suggesting that creationism should be taught alongside evolution. “They’re both theories,” he told Vice Motherboard. “And all we’re asking for is both sides of the discussion in a balanced way be put in front of the students.”

But Haught says students already enter his classroom not knowing much about issues like climate change. “So, I work hard to build a foundation, and it’s incredibly important that you have a good solid foundation on which these kids — when they become adults — can then build on,” he says.

“If we start compromising, if we start saying, well, let’s not teach this part or let’s change how we teach that part, you put cracks into that foundation that can then influence them far, far into the future. So, we need to be careful with that.”

Now, with the new school year in full swing, Haught is preparing to see schoolbooks challenged under the law. “Folks are just getting geared up,” he says. “And here in Florida this year, the Florida Department of Education is going to go ahead and go through the process of reviewing and approving a list of brand new science textbooks that will then be used for the next several years.

“So, once that process gets started and filters down to the local level, you’re going to see a lot of activity at that point.”