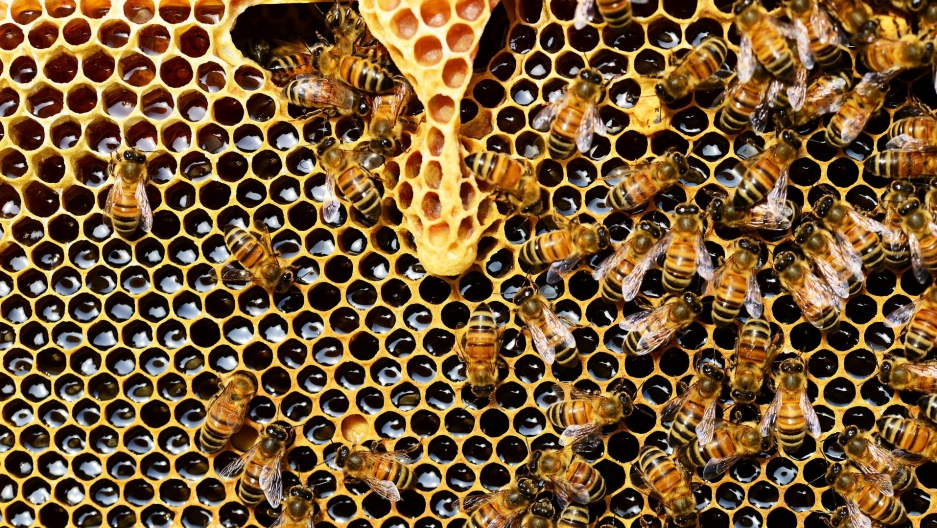 Honeybees are shown at work.

What does it take to bring science and engineering to life for students?

How about a little news?

That’s the idea behind the Science Friday Educator Collaborative, now in its second year. Seven teachers around the country are designing curiosity-provoking science, technology, engineering and mathematics resources for anyone to use, based on stories from Science Friday.

Stacy George, who teaches STEM to elementary schoolchildren in Hawaii, pulled together a guide for observing the shape of bee honeycombs that was inspired by an article on Science Friday’s website. “The lesson actually started from the students,” she says, who were afraid of the honeybees they encountered while watering the school’s garden, “and so they would throw buckets of water from 5 feet away.”

“I really didn’t want them to be afraid of bees,” she adds. “I really wanted them to appreciate [them], and so just through exploration I was able to find a Science Friday article — and there were many on bees, but what really captivated me was the Hive.” The Hive, an immersive beehive sculpture in London’s Kew Gardens, is “just this amazing sculpture,” she says. “And so we started out from there and explored not just bees, but where they live and this important part of the honeycomb.”

After the lessons, George’s students didn’t just begin to appreciate the bees. “They looked at them differently,” she says, even changing their garden-watering schedule. “They didn’t want to disturb the bees in the garden while they were working, and so they would go out at different hours.”

Jose Rivas, who teaches physics and engineering at a California high school, took another approach. He used a video of NASA astronaut Don Pettit spinning eggs in space to launch an experiment about rotational inertia. In the video, Pettit spun decoy raw and hard-boiled eggs in zero gravity. “You could see a very big difference between those two eggs,” Rivas says. “The hard-boiled egg spun relatively well; it was very stable. And the raw egg, it spun out of control — it started wobbling.

“So, [when] I saw that, I was like man, I have to bring that back down to Earth and create a resource to help students explore what is happening inside the egg,” he adds, “and then also to explain, what is rotational inertia and how does that affect objects?” In Rivas’s resource, students experiment with — yes, spinning eggs, but also “vehicles” made from dowels and old CDs.

Throughout September, five other teachers will share resources on everything from engineering better winter boot treads to determining the time of death at a mock crime scene. Meanwhile, other STEM resources on the site are updated year-round.  (You can find everything from DIY solar eclipse viewers to math projects calculating the cost of window washing on a skyscraper.)

“What we’re trying to do is take the awesome stories that come out each week that are covered on our video and radio and in articles,” says Science Friday education program assistant Xochitl Garcia, “and empower parents, educators and learners to explore, investigate, basically do science, technology, engineering, mathematics, STEM and explore more about their world.”