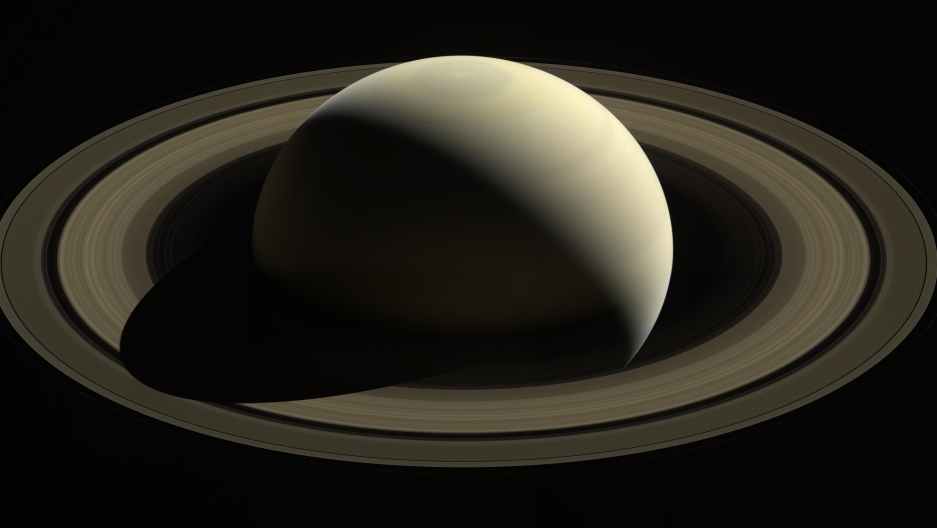 Saturn has been Cassini's home for 13 years.

It was a 20-year voyage from Earth to Saturn, and it finally ended early this morning — Earth time — when the Cassini spaceship burned up in the atmosphere of the giant planet.

“The signal from the spacecraft is gone,” announced a NASA flight controller from the Jet Propulsion Laboratory in Pasadena, California. “I’m going to call this the end of [the] mission.”

Restrained applause rippled through the crowd of project scientists and others listening to the announcement nearby at California Institute of Technology, where they’d gathered to witness Cassini’s final moments.

There was a sense of triumph and satisfaction at the success of the joint NASA European Space Agency mission, which delivered volumes of new information on the massive, ringed gas planet and its moons since it went into orbit in 2004 after a seven-year voyage, and delivered a lander to Titan, one of the moons.

But there was also sadness.

“It’s hard to see the end of Cassini,” said Jonathan Lunine, a Cornell University scientist who’s been with the mission from the beginning. “We always knew it would have to end sometime, but that’s such a difficult thing to do with a spacecraft that’s done so much, as Cassini has done.”

Cassini has studied — and recently danced through — Saturn’s rings, discovering that they’re probably made of water and probably much newer than most of the rest of the solar system. It has studied the giant planet’s giant storm systems, sent back remarkable close-up photos of the planet’s colorful bands, rings and many moons, and helped scientists realize that two of those moons — Titan and Enceladus — may harbor the conditions for life.

Titan, in particular, has proven especially intriguing, and in many ways familiar.

“I would say it’s the most Earthlike body in the solar system,” says Trina Ray, an astronomer who has been with the Cassini mission for 21 years.

It has a thick atmosphere that interacts with the surface, she says, and something very much like Earth’s hydrological cycle, only with hydrocarbons instead of water.

There are even massive, windblown sand dunes, Ray says, only the sand grains are made of water ice instead of rock.

But after 13 years exploring Saturn and its moons, Cassini was running out of fuel, and mission planners feared it could crash onto one of those possibly life-sustaining moons and contaminate it with hitchhiking microbes from Earth. So, they charted a final course for Saturn itself, where it would burn up in the planet’s thick atmosphere.

It’s unlikely there’s life on Saturn itself, but Ray says even if there is, there’s no chance any microbes would survive Cassini’s death dive.

With the demise of the Cassini mission, there are no current plans to return to the planet almost 750 million miles away. In the short term, NASA plans a mission to one of Jupiter’s moons, Europa, which has an ocean of liquid water beneath an icy crust, and which scientists also hope might be home to living organisms.

But Saturn has an allure like no other planet, and scientists are already cooking up plans to get a craft back there.

Correction: Saturn is almost 750 million miles from Earth, not 750 billion miles, as originally stated in this article.