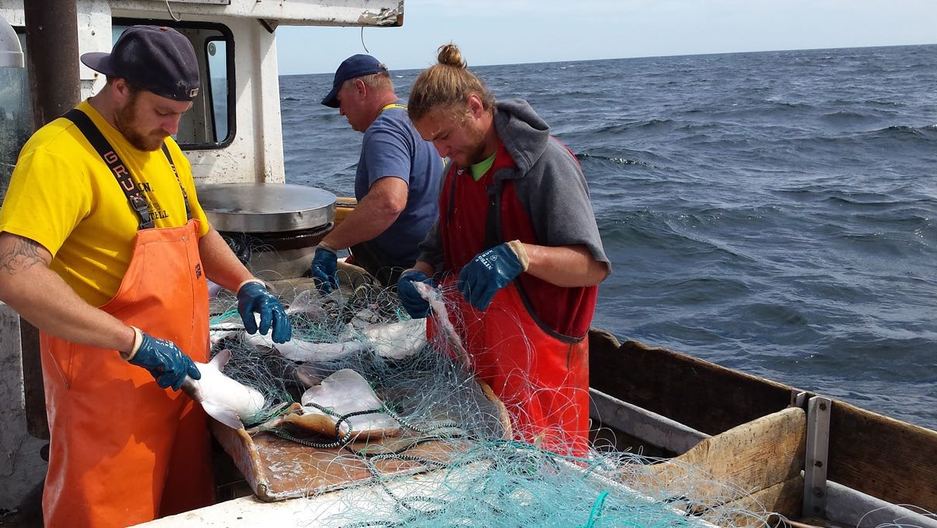 Tim Linnell and his crew pull skate from the waters of Cape Cod.

Every summer, tourists flock to Chatham Pier on Cape Cod, Massachusetts, to watch commercial fishermen unload their catch. And for hundreds of years, it was cod that fishermen hauled into Chatham’s storied harbor — and cod that gave this coastal region its name.

Today, however, it’s dogfish and skate the fishermen are hauling, as warming waters, prior bad management, and a host of other factors have made cod increasingly hard to find in New England’s Gulf of Maine.

Related: For fish, the good and bad of warming ocean waters

The fishermen are paid pennies for their catch — literally 20 cents per pound for dogfish — and the majority of the fish is whisked off to markets in Europe and Asia, where higher demand fetches better prices.

Tired of telling Chatham Pier’s tourists, “You have to go to Europe!” when asked what their catch was and where it could be bought, a group of fisherman launched Pier to Plate, a Cape Cod effort to shift the market away from cod and toward the lesser-known species that are more readily available in the New England waters, says Nancy Civetta, a spokesperson for the Cape Cod Commercial Fishermen’s Alliance.

“Pier to Plate is a way for the public to support local fishermen,” said Civetta. “The truth is, what used to be the bread and butter for Cape fishermen has changed. Now, it’s dogfish and skate.”

Launched this year, the initiative provides the fish for free to chefs at participating restaurants, an idea that came from the fishermen themselves. “We all sat around and brainstormed, and the fishermen said, ‘Just give it away for free,’” Civetta said, at least until the effort gets off the ground. “Chefs still need to experiment with the fish, but they’re not going to do it out of pocket.” 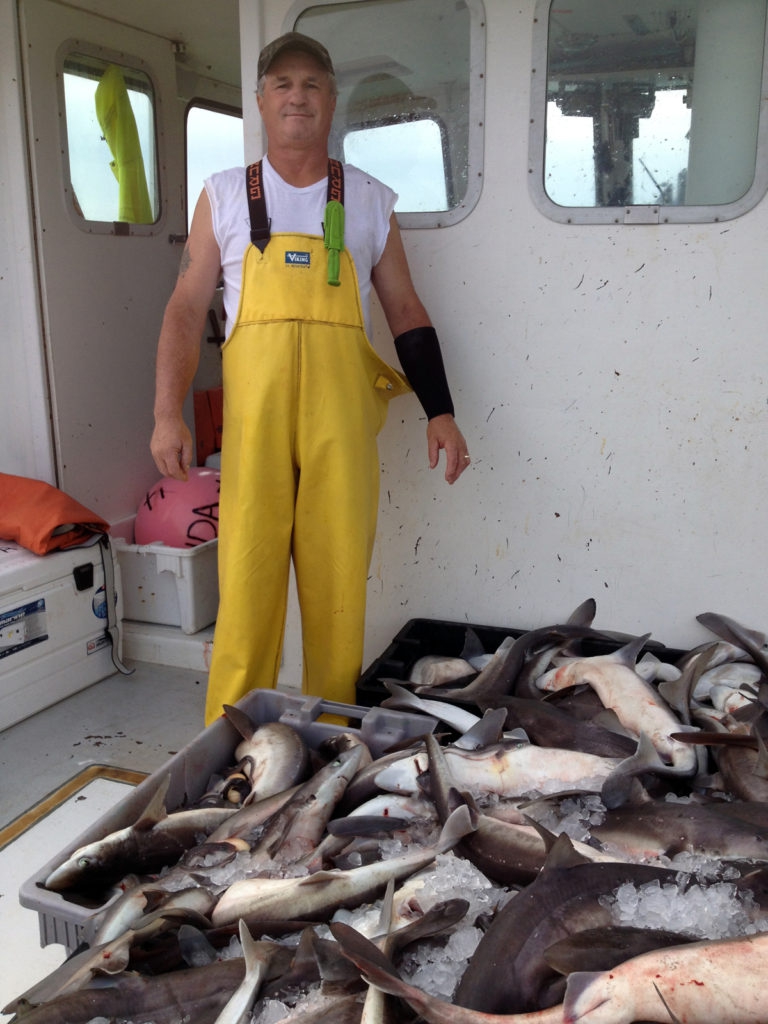 John Cuttle is shown with part of a day’s catch of dogfish.

Ultimately, initiative leaders hope Pier to Plate will help stimulate a domestic market for abundant local fish like dogfish and skate, raise catch prices and improve financial prospects for the area’s small, day-boat fishermen. Civetta sees restaurants as one piece of the larger puzzle: Once they establish demand, she hopes institutional buyers, like colleges and hospitals, will step in to move the volume of fish necessary to sustain higher prices for fishermen over the long term. And eventually, she’d like to see dogfish and skate sold in grocery stores for everyday consumers.

Funded by the National Oceanographic and Atmospheric Administration, the initiative emulates the national Chef’s Collaborative Trash Fish Dinners, with one big exception — it prefers the label “underloved” to “trash fish.”

Pier to Plate earned the Cape Cod Commercial Fishermen’s Alliance a Saltonstall-Kennedy grant from NOAA because, as John Bullard, Greater Atlantic regional administrator for NOAA, explained, it aligns with the grant’s goals of addressing the needs of fishing communities and building and maintaining resilient and sustainable fisheries. “Promoting the lesser-loved dogfish and skate, both of which are delicious, helps fishermen get more for their product and keeps that product local,” said Bullard.

Underloved fish on the menu

Around 30 Cape Cod restaurants, from beach stands to upscale eateries, and one fish market have joined the Pier to Plate program so far this summer. Wholesalers and traders that buy from small, community-based fishing boats, like Red’s Best, Seatrade and Marder Trawling are also partnering to help market the underloved species.

Thus far, it’s been, “very, very successful — when restaurants substitute it straight up,” said Civetta. In other words, when restaurants stop offering dishes made with cod and offer dogfish or skate instead, consumers are eating it up.

Far Land on the Beach, a beach stand that offers both gourmet cuisine and standard-fare lobster rolls, for example, is substituting cod with dogfish in its fish sandwiches and tacos, and Wes Martin, Far Land’s head chef, says it’s selling well. “People want to support sustainably caught fish,” he said. “They are coming to the window, saying that they are eager to try it.” 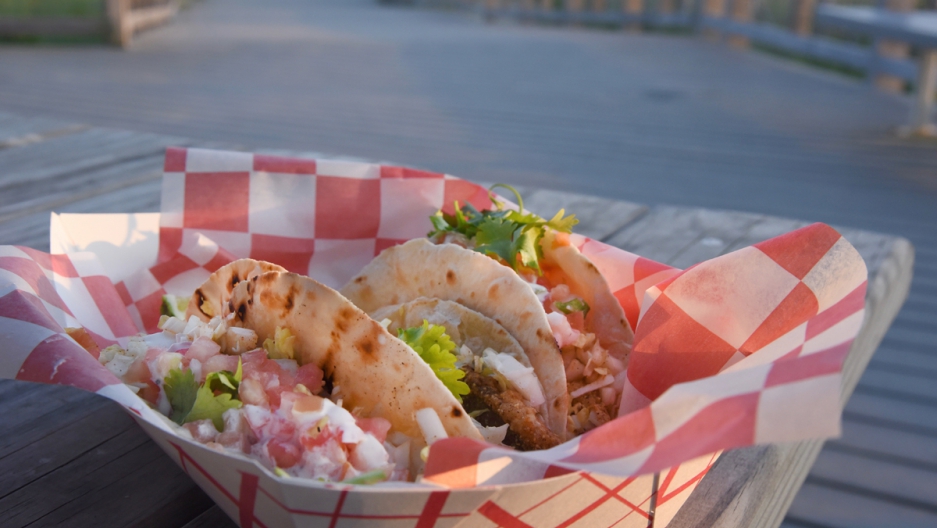 Skate tacos from Far Land on the Beach are pictured here.

Bigger seafood houses, whose menus include greater variety, as well as imported seafood not available in Cape Cod waters like salmon and shrimp, can find the underloved species a tougher sell with diners, however.

“We have so much variety,” said Mac Hay, proprietor of several Cape Cod restaurants that are participating in the program. “There’s so much fish you can get, so someone’s not going to choose dogfish, and you have to do a certain volume to keep it fresh.”

While Hay isn’t serving dogfish through Pier to Plate, he is serving skate, and he said it sells well. “People will take to a new fish if they like it, and if you get behind it and make it a real option, not just once a week,” Hay said.

The difference between skate and dogfish points to a key factor in getting the public to take on unknown species: Appearance matters. So, of course, do texture and taste.

Skate, a bottom-dwelling fish that resembles a stingray, can be filleted and panfried. It’s a stand-alone fish with a mild flavor, and it sells fairly well. Dogfish, on the other hand, a small, bone-free shark, needs some dressing up.

“Dogfish doesn’t look like a fillet of fish,” agreed Andy Baler, a stalwart of Cape Cod’s fishing community, who recently opened Bluefins Sushi and Sake Bar, another Pier to Plate participant. “You have a long piece of meat, like a log. It doesn’t have the same texture. It’s unlike whatever else people are used to.”

“It’s oily, even though it’s a white fish, and you have to find a way to hide the oily flavor,” said longtime chef and owner of the upscale restaurant Terra Luna, Tony Pasquale. Even so, Pasquale said that it’s more fun to play with dogfish than with skate precisely because it is a challenge. “It’s a tough fight,” he admitted of the oily flavor, “but damn it, I’m not going to be beaten by a tiny Cape shark.” 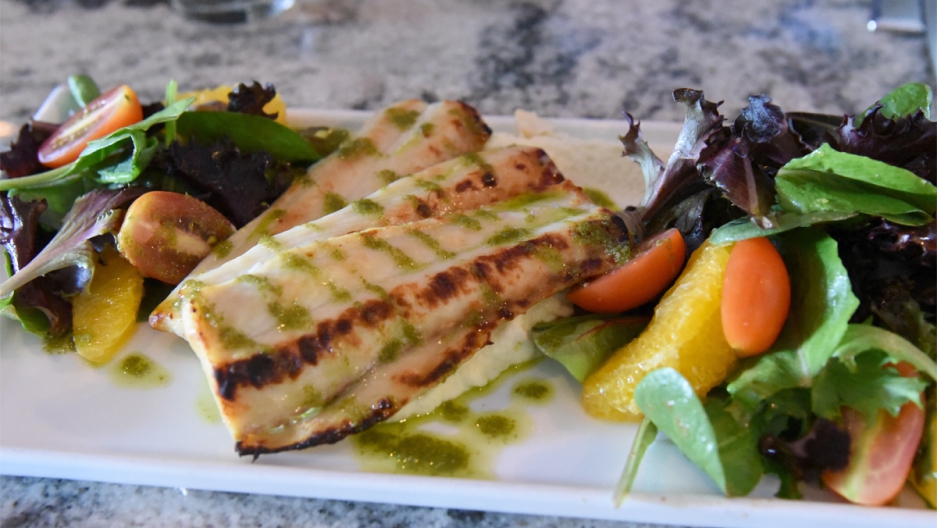 Changing consumer preferences can also be tough when cod is still available in many traditional seafood restaurants. The majority of that cod is coming from Iceland or Canada, though some is still locally caught. It’s a disconnect for consumers, said Pasquale, adding, “At some point, I’m not going to put cod on the menu. At some point, it’ll be $50 a plate.”

While some chefs and restaurant owners embrace the idea of promoting locally caught, unknown species, others are leery of taking on a new species if supply can’t be guaranteed. And wild-caught species can have an unpredictable, lumpy production.

Hay cited the example of hake, cod’s lesser-known cousin. “We started pushing hake, and it took off like crazy, and then the price of hake took off, and demand went way up,” he said. “We could take 400 to 500 pounds a week between the three restaurants, fish markets and wholesale shop. But the fishermen weren’t ready to do it consistently for us, so then it falls out of our regular routine. The chefs in the kitchens aren’t ordering it, and then all of a sudden the supply is back, but we’ve moved on because we’ve already printed our menus and they say cod; they don’t say hake anymore. They’re ready, and we’re not.”

“It’s a whole industry that can’t just shift on a dime,” said Hay.

Out of the Blue, a similar collaboration between fishermen and chefs in Portland, Maine, also struggled with the supply-demand dynamics for underloved species. Piloted by the Gulf of Maine Research Institute in 2011 and also funded by NOAA, Out of the Blue did not give the fish for free to chefs. Instead, it developed a robust marketing campaign for participating restaurants.

“We had to reverse a vicious cycle,” said Jen Levin, sustainable seafood senior program manager at GMRI. “The fishermen weren’t harvesting because no one was buying. No one was buying because the fish weren’t on the buy sheets.”

By convening fishermen with chefs, working with suppliers and garnering local and national media attention, Out of the Blue was able to break through. Six years later, the program has been discontinued, but many Portland restaurants still offer Gulf of Maine pollock, redfish and dogfish.

But the biggest success, according to Levin, was getting institutional buyers involved. “The ideal thing is to harness chef power as thought leaders and parlay that into the broader movement, into sourcing from larger buyers,” said Levin.

She points to Sodexo’s 2015 commitment to source 100 percent of its whitefish for its institutional customers in Maine from Gulf of Maine species. It even recently introduced a breaded dogfish product, fish tacos, for college campuses.

Civetta hopes Pier to Plate will follow a similar trajectory and that institutional buyers will eventually join the effort, too. A Cape restaurant may use 40 to 50 pounds of fish per week, she said, but a single fisherman is allowed to haul in 6,000 pounds of dogfish daily. Last year, fishermen barely filled half of their allowable quota because there wasn’t enough demand.

Already, one of Pier to Plate’s partners, Red’s Best, is in conversation with some universities.

“We hope the free samples turn into buying,” said Civetta, and she’s also encouraged that it’s already starting to happen as some year-round restaurants, like Bluefins and Far Land, are incorporating the underloved species into their menus.

Bluefins’ Baler said he’s committed to exposing everyone to local fish. “The fishing community needs that exposure,” he said.

“We’re all going to have to start eating a little lower on the chain,” added Pasquale.