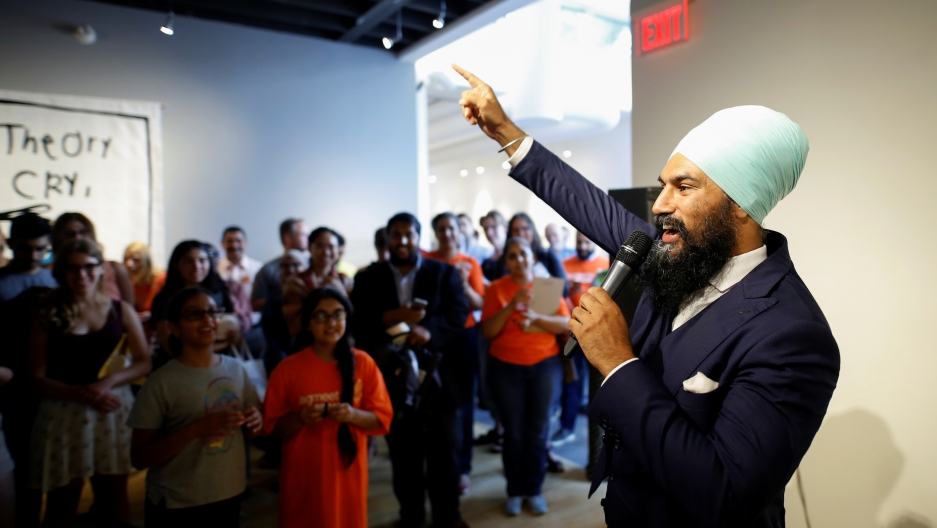 "This event was going to be in the city where my political career began. And it was a room filled with friends and supporters who have been with me since the beginning. So it was an atmosphere of celebration,"​ says the New Democratic Party leadership candidate.

But the atmosphere soon turned sour.

A heckler got in Singh's face and started shouting at him. She accused Singh — who as a follower of the Sikh faith wears a beard and turban — of supporting Sharia law and political Islamist groups like the Muslim Brotherhood.

Singh’s response? He tells her she is loved and valued, over and over again. Eventually, the woman stops shouting and walks out of the hall.

A video of the exchange has since gone viral.

"I'm familiar with racism. It's something that I've faced because of my identity," he said. "My mom always taught me that we're all one and we're all connected. And to see that connection, that shared connection in all people."

Singh's level-headed response has been widely praised on social media:

This ignorant woman is infuriating. I hope wherever she is someone who cares about her is showing her how awful she looks here. https://t.co/yezqnN8617

Watch @theJagmeetSingh demonstrate my father's belief that love is a powerful force in the face of hate. #MLK pic.twitter.com/WYHsGFQ0eI

But there's also been pushback.

In a thoughtful thread on Twitter, the activist Sheila Sampath compliments Singh, but then asks, "Is this the template for POC [people of color] when we are attacked? To say ‘we love you’ to our attackers? Are we not allowed to feel the pain from those attacks? And to express that pain as complex human beings? To expose the trauma?”

Journalist Rachel Giese adds in Chatelaine, “There’s an unfair burden placed on people who experience oppression and discrimination to rise above it, or turn the other cheek.”

She continues, “Victims of racism and other forms of discrimination and hate mainly receive sympathy and applause when they swallow their anger and hurt, rather than express it. ‘Love and courage’ is a wonderful approach, but it shouldn’t be used to dismiss the reality of ‘rage and fear.’”

Singh says there are many ways to respond to hate.

“I really believe that, whenever possible, de-escalation is important,” he says. “I chose one particular way. But there’s no one way. We’re complex human beings and there’s complex ways to respond to hurt and to violence.”

To hear the rest of Jagmeet Singh’s interview, click on the audio above.

Related: Canadian groups are lashing out about Muslim prayer in schools