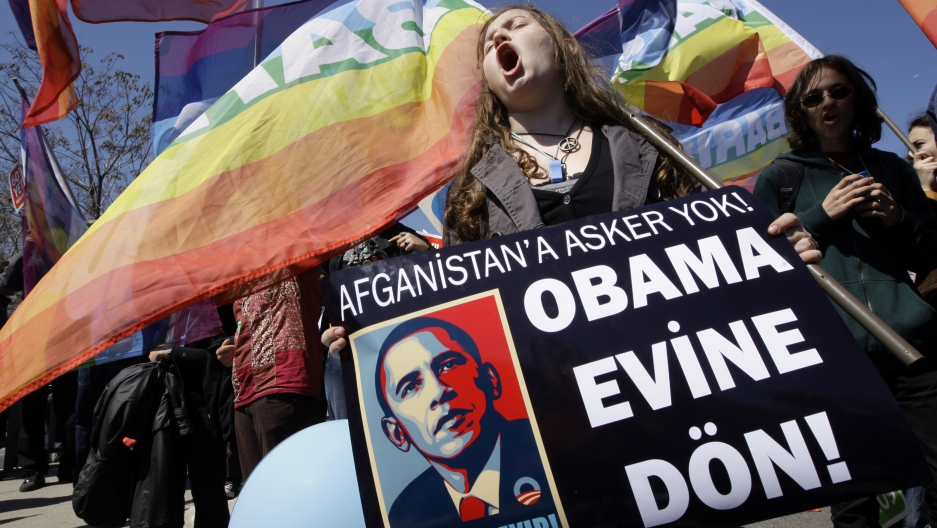 A Turkish demonstrator holds a banner in Istanbul in April 2009. It reads, "No soldiers for Afghanistan. Return to your home Obama."

"My years as an American abroad in the 21st century were not a joyous romp of self-discovery and romance, the kind we see in movies. Mine were more of a shattering and a shame," Hansen writes in her new book, "Notes on a Foreign Country: An American Abroad in a Post-American World." "We can no longer travel in foreign countries without noticing the strange weight we carry with us."

That strange weight is largely a product of living in the heart of the beast, an imperial America that's in decline and doesn't know its own history — especially with the Muslim world.

Hansen's book is part political travelogue, part history lesson. She settles in Istanbul and travels to Greece, Egypt, Afghanistan, Iran and the Mississippi Delta. She reconsiders her notions of what it is to be American — ideas that were so deeply embedded in her worldview she didn't know they were there. In particular, she draws conclusions about identity and what it means to have grown up in an empire.

But as she travels through countries where the US had once been a dominant power, she hears from countless foreigners about the violence Americans introduced into their lives.

"Greeks, Egyptians, Iranians they knew this history. It was part of them, it was so deeply part of them and it wasn't at all part of me," she says. "There's a very very deep part of the American education system and American propaganda which is to keep telling us that we are innocent of our history. We're not."

Hansen says before Americans can see themselves as a force for good in the world, they need to have candid conversations with those outside their borders.

"I would hope that Americans would think, 'Well, OK, maybe the way that I have interpreted my history and interpreted the idea of what it means to be American has been false on some level,'" she says.