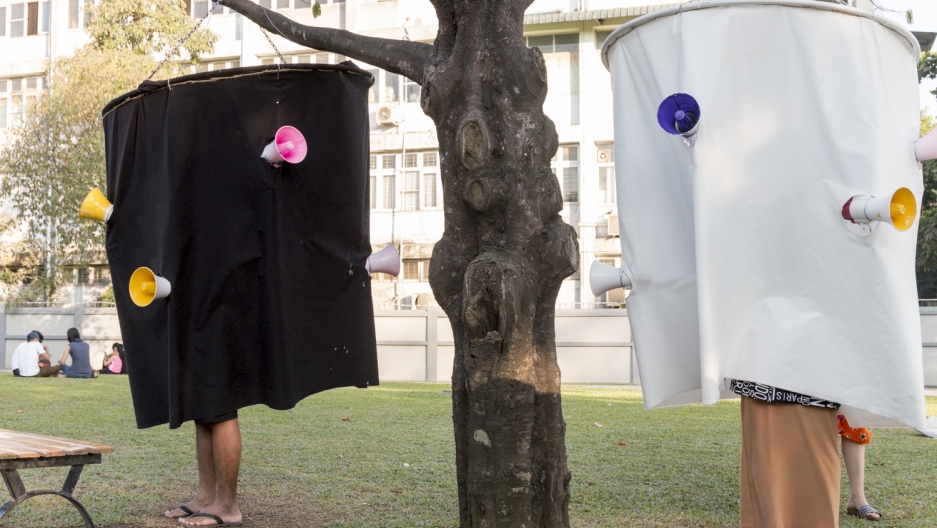 People in a Yangon try out the "soundsuit," an art installation that's designed to draw attention to noise. "Maybe once people hear what they sound like," says one of the creators, "they'll reduce the noise."

Peace and quiet is hard to come by in Myanmar, where overenthusiastic use of megaphones has long frazzled the nerves of locals and foreigners alike.

The amplified calls of snack vendors, public officials and religious leaders add to the din of traffic and jackhammers — this is the soundscape of a country desperate to modernize after decades lost to isolation and military dictatorship.

Myanmar’s noise pollution gained a level of notoriety over the past year, after a Dutch tourist named Klaas Haytema was imprisoned for pulling the plug on a late-night Buddhist sermon. He was charged with interrupting a religious assembly and served three months, with hard labor, before he was deported. His case went viral. Now artist Thurein Than Kyaw is one of many people in Myanmar openly asking how much noise is too much?

Thurein Than Kyaw’s latest project, called the “soundsuit,” looks like a giant, upright tube with seven colorful megaphones sticking out. Two soundsuits were recently displayed in a park in Yangon where passersby could make as much noise as they wanted — or pull the plug — without having to go to jail for it.

Kids loved the soundsuits. They strayed from the monkey bars and slides at the nearby playground and switched on every one of the megaphones and their pre-recorded segments of “It’s a Small World.” Cuddling couples fled, and the sudden noise confused park security.

When asked about the soundsuits, Thurein Than Kyaw gave a sly smile, then carefully emphasized that his work was not meant as a direct response to the Dutch tourist’s case.

“I don’t know enough to say if arresting the foreigner for the unplugging case was right or not,” he says. “I think such a case is difficult.”

By “difficult” he means sensitive. Just talking about the Dutch tourist makes people nervous. Slights against Buddhism — things like tattoos or posters that use the image of Buddha — are seen as serious, criminal offenses in Myanmar, which is a predominantly Buddhist country. The Dutch tourist case prompted a backlash among conservative religious factions. After the tourist turned off the loudspeaker, soldiers had to disrupt an angry mob that showed up outside his hotel.

Thurein Than Kyaw says, with the soundsuits, his focus was on getting people to be more self-aware of their own noise.

“Most of the people in Myanmar they ... make everyday noise. I just want to point that out, that’s all,” he says. 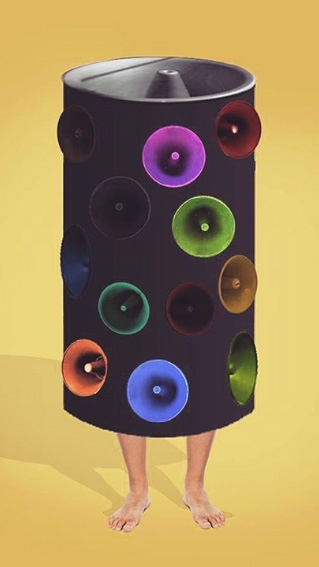 A graphic of the soundsuit

Couresty of Thurein Than Kyaw

His method of tackling the social issue is almost unheard of in Myanmar. While there’s a well-developed arts scene, it’s only just beginning to show an appetite for modern work.

“Maybe some people don’t know this is art. [They think] this is like a decoration or this is something other,” says Aung Myat Htay, the co-founder of Myanmar’s only contemporary arts school and the producer of the soundsuit.

Public exhibitions are still a novelty in a country where the penal code continues to criminalize the “unlawful assembly” of five or more people.

“[Under] the previous government [this kind of work] would never come out,” Aung Myat Htay adds.

For decades, Myanmar artists were stifled by military censorship. Artists have gained room to experiment after the first democratically elected government in a quarter of a century came to power last year.

But free speech remains elusive and online political criticism can result in prison time. In such a tenuous environment, self-censorship remains pervasive — especially around taboo topics like religion and ethnic conflicts. On issues that involve the military, like the ongoing Rohingya crisis, moderate voices, or those that run counter to the state-sponsored version of events are rare, in part due to the threat of harsh and frequently enforced online defamation laws.

For now, Thurein Than Kyaw says he sees his role as an artist as highlighting some of the problem areas — like noise. At least on that front, he thinks he may have found a solution.

“A little reduced is better.”