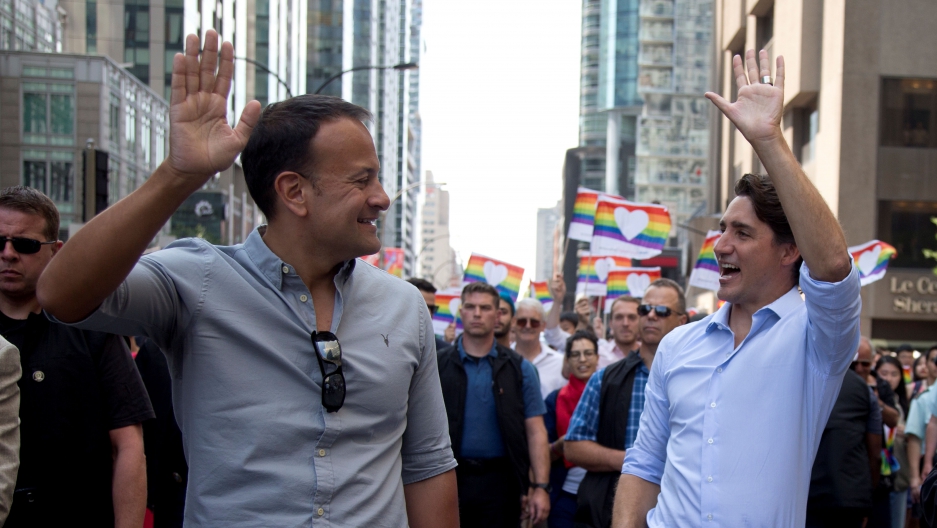 When Ireland’s prime minister, Leo Varadkar, 38, took office in June, he broke several glass ceilings at once: He became the youngest ever, first gay and first nonwhite person to lead the country.

Varadkar, the son of an Indian father and Irish mother, came in as the new taoiseach, the Irish word for prime minister, with a promise that he and his party would “seek to build a ‘Republic of Opportunity,’ and that is a republic in which every citizen gets a fair go and has the opportunity to succeed.”

His rise to power was greeted with praise and congratulations, particularly by the international press — which made him the poster boy of an Ireland that is rapidly emerging from a conservative past dominated by the Catholic Church. Time magazine even put him on its cover with the tagline, “An island at the center of the world.”

But three months on, that initial shimmer has started to fade. During Parliament’s summer recess, which ends next Wednesday, Varadkar spent a lot of time abroad building his and Ireland’s image, and pursuing trade opportunities.

"Where is the taoiseach?” asked Irish radio host George Hook on his daily show recently. “Well, the taoiseach is in Canada."

Hook is one of a growing number of voices calling on Varadkar to stop with the photo ops abroad and start addressing the problems at home — such as homelessness and the economy.

After Parliament reconvenes next week, Varadkar and his party will face a legislative year fraught with challenges. Ireland is facing a chronic housing shortage crisis, which has triggered unprecedented homelessness figures. Endemic corruption has been exposed in the country’s police force. This year’s budget remains unbalanced. Various aspects of the public health system are drastically dysfunctional.

In the face of all these problems, the main thrust of criticism leveled against Varadkar is that after coming strongly out of the gates in June, he has simply not delivered. Instead of strong leadership, the critics say, Varadkar has merely given public relations messages and spin.

“It's sort of a slicker, more accomplished version of what Trump has done in the States,” says Lorcan Nagle, a volunteer with the Abortion Rights Campaign, an advocacy group. “You sell the image rather than sell the policy.”

Nagle stands behind by an information table he has set up with a fellow volunteer at a busy intersection in Dublin. Since announcing that a referendum will be held next year, Varadkar has remained silent about when exactly it might happen, as well as about the possible language and scope the referendum might have. His own position on abortion remains ambiguous.

“I feel like he hasn't stepped up enough,” says Lucy Bennett, a Dubliner who passes by Nagle’s stand to sign a petition and pick up some information leaflets.

Part of the current frustration with Varadkar may be rooted in unrealistic expectations. Some on the left had hoped the new taoiseach, as a gay man and son of an immigrant, would usher in a progressive agenda for his center-right party, Fine Gael. But Varadkar has held fast to his conservative politics, and that’s proving to be a lesson for the left.

“I think there’s an assumption that if someone is LGBT, that they are therefore going to be automatically with us on everything else,” Nagle says, “and that’s a bad assumption on the part of the left wing.”

Across town, at a candlelit vigil outside Parliament, a group chants its resentment at feeling excluded from Varadkar's Republic of Opportunity.

In front of a dimply photograph of a homeless man who had died in the streets the night before, some 50 people yell, “What do we want? Homes for the homeless! When do we want it? Now!" 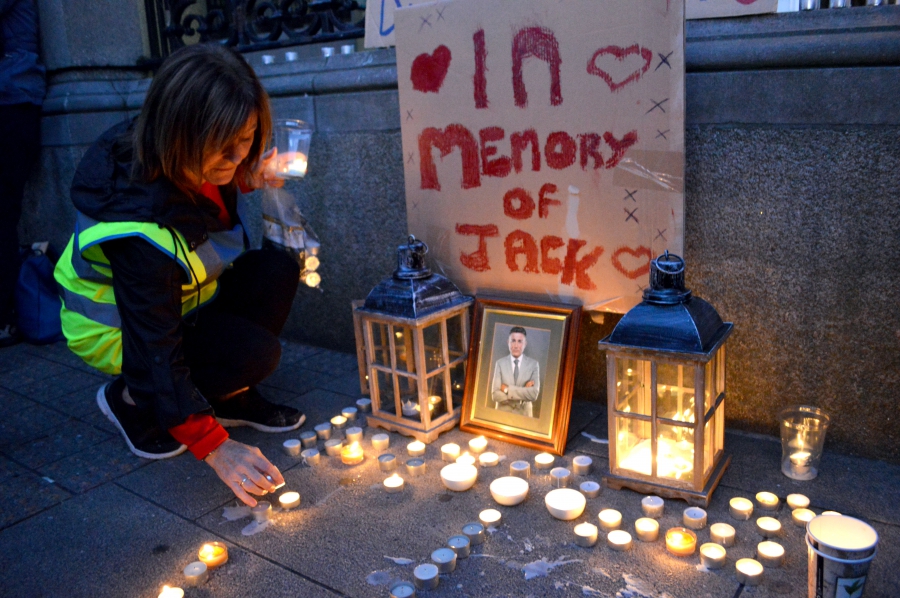 A woman in Dublin lights a candle in front of a vigil for three homeless people who died on the streets in one week this summer.

For the past two years, rents all over Ireland have risen due to a lack of housing supply. Ireland has not been building new houses in any significant number since before the 2008-2013 recession, and now that it needs to, its hands are tied. Public spending is capped as a condition of the country’s 2010 international bailout, and the private construction sector is struggling to access credit, another legacy of the recession.

All in all, the housing shortage has led to unparalled homeless numbers in the history of the state, as people are being priced out of their homes by rising rents.

Alan Buckley, a homelessness activist at the gathering outside Parliament, calls the situation a national emergency that Varadkar is doing nothing about.

“Jack Watson — a person — died on your watch, Leo,” says Buckley. “You keep telling us that we live in a country that keeps improving, that the economy is growing and that's a f***ing whitewash.”

Varadkar's office declined an interview for this story.

The leader has said his government will build around 2,500 social houses this year after near-zero social housing output for many years. He has also vowed to increase the country’s natural disaster relief fund and to fight inefficiencies in the national health system.

Promises are well and good, says analyst Johnny Fallon, but Varadkar will have to counter the growing dissent he is facing with concrete action once parliament reconvenes.

“He needs to prove that he's a real heavyweight politician and thus far that has been a challenge for him,” says Fallon. “The Irish electorate have proven that they are quite forgiving and understanding of decisions that have gone wrong simply because you have tried to do something. What they are unforgiving of is the idea of doing nothing or avoiding it. They really dislike that.”