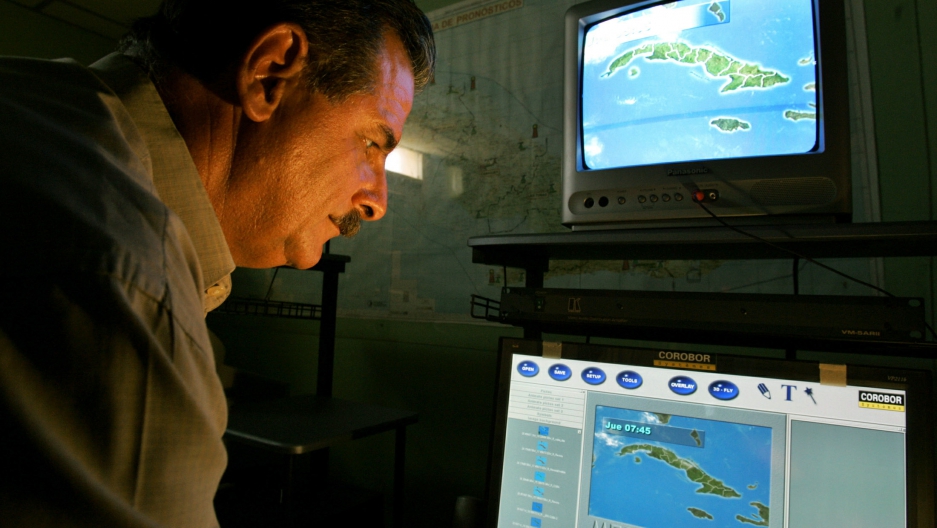 Veteran Cuban weather forecaster Jose Rubiera is now retired. But when a big storm hits, he returns to his broadcasts, to the relief of many Cubans.

As Hurricane Irma churned toward Cuba last weekend, residents on the island switched on their televisions and radios, hoping to hear a familiar, reassuring voice.

No, it wasn't the words of the late leader Fidel Castro they longed for — it was the forecast of esteemed Cuban meteorologist José Rubiera.

But the beloved weatherman was nowhere to be found.

"All over social media the Cubans started asking, 'Where is Rubiera?'" says Havana-based journalist Gail Reed. "Rubiera has been with Cubans over the decades, during every storm, every hurricane, every threat meteorologically to the island."

As it turns out, Rubiera was stuck in the Miami airport, awaiting a flight to Havana. Even though he is officially retired, Cuba's government returns him to the airwaves every time a major storm zeros in on the island.

And sure enough, Rubiera managed to hop a flight and get back to Cuba. He was on-air Thursday, just before the storm hit.

His appearance didn't come a moment too soon for Cubans.

"They trust him because he teaches them, and he teaches them very early on before the hurricanes even hit. And that's why they were already missing him," says Reed, the founder of MEDICC, an NGO that works to increase US-Cuban cooperation on global health issues.

"He's a scientist, he's not a stick figure they put behind a map," she says. "He teaches everyone. You ask taxi drivers in Cuba, and they can tell you about the Saffir-Simpson Hurricane Wind Scale," because of Rubiera.

Later in the week, when Hurricane Jose materialized in the eastern Caribbean, Cubans breathed a sigh of relief after Rubiera assured them that the new storm wouldn't be a danger to the island.

The Cuban meteorologist is a global force of nature onto himself. He's renowned for working closely with Florida-based colleagues. Reed says some Spanish-language meteorologists in Florida used Rubiera's reports in their broadcasts last week.

Hurricane-preparedness is a speciality for Cubans. Its tenants are taught throughout the region by the health care professionals Cuba's government deploys to neighboring islands. Long before Irma hit, some 700 Cuban health professionals were already working throughout the Caribbean, including a team of 20 health care providers on the island of Barbuda. In recent days, Cuba has sent another team of 20 workers to Barbuda to help restore the electrical grid.

The US economic embargo will complicate Cuba's own recovery from Hurricane Irma. But Reed says MEDICC is a legal source of donations for hurricane relief in Cuba because the NGO works through the Pan-American Health Organization and the World Health Organization.