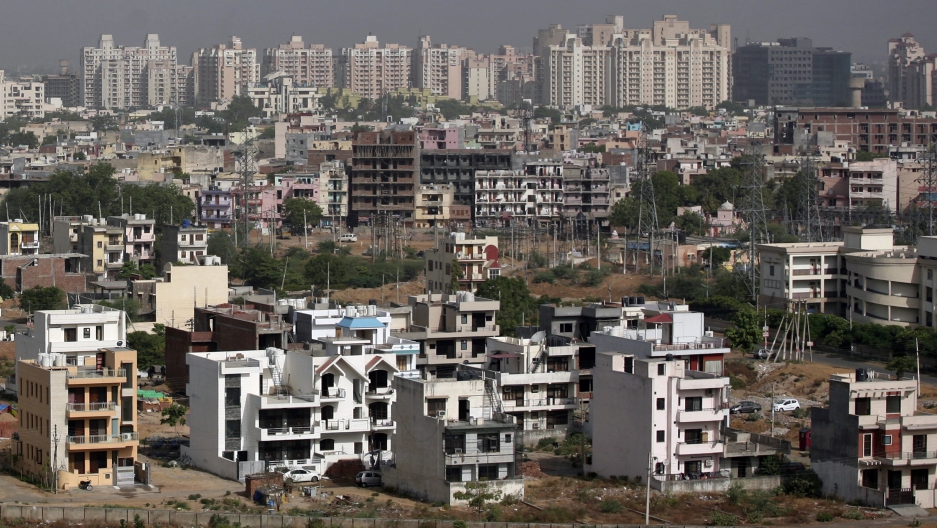 A general view of the residential apartments is pictured at Gurgaon, on the outskirts of New Delhi, June 19, 2012.

As a booming metropolitan city, Delhi draws Indians from around the country. Students and young professionals converge on the capital for opportunities they cannot access in their hometowns, but finding work is often not the hardest thing for these people.

Delhi lacks high-rise apartment buildings, so people have to find property owners who rent out apartments in their own house. These landlords often pick tenants based on their own biases against professions, religions, ethnicities, class and even diets.

“We were going to see an apartment in Delhi, and this person looked at us from the balcony and refused to open the door,” said Priya Konsam, a banker who is now based in Mumbai. “They said they won’t rent to people from the northeast.”

Indians from different regions are often recognizable by their facial characteristics, and people from northeastern states suffer discrimination and harassment in Delhi.

Konsam has also faced questions about her diet from a landlord.

According to Sarita Bhardwaj, a broker in Delhi, landlords are also hesitant to rent to people from India’s northeast now because of stricter laws against discrimination.

“The law favors them if they complain so landlords are afraid to rent to them,” she said.

Kekuchina Nsarangbe, a marketing consultant in Delhi who also hails from that region, was told by a landlord that they only rent to “pure vegetarians” and “pure Brahmins.” The implication was that even eating eggs, or being born to a lower status than the highest Hindu caste, would not be permitted.

Nsarangbe also faced discrimination for being a single woman.

“I was climbing the stairs to see a fourth-floor apartment, when an elderly couple on the first floor asked the broker if I will be living alone,” she said.

The couple then went on to ask the broker if Nsarangbe would be out late, and if she would bring men to the apartment.

“These were not even the landlords, they were the neighbors! I refused to see the apartment,” she said.

Anandita Sharma, a lawyer based in Delhi, was also refused an apartment that was being rented to “families only.”

“I have come across apartment posts that ask tenants to be home by 10 p.m.,” she said. “My last landlord did not allow boys to go up to our apartment, so any men had to be declared ‘cousins.’”

Sharma bears the additional burden of being a lawyer, a profession that most landlords frown upon because they expect lawyers to be litigious.

“I found a great apartment, but when the broker found out what I do, he told me to say I worked at a [multinational company],” she said. When Sharma refused to lie about her job, the broker told her to find another apartment, as convincing the landlords to rent to a lawyer would be impossible.

Raies Ul-Haq Ahmad Sikander has been refused apartments for being a lawyer, a single man, a Muslim and a Kashmiri.

“I finalized an apartment and paid a reservation fee, but the landlady saw my ID and suddenly withdrew her consent,” Sikander said. When he insisted on finding out why she had a change of heart, she said she doesn’t rent to people from Kashmir.

“Brokers told me to say I am a student instead of a lawyer, but they still wouldn’t rent to me because I am from Srinagar [in Kashmir],” said Sikander. “They questioned why I wanted to live alone and why I didn’t have any friends to live with when I had lived in Delhi for a few years already.”

Another broker told Sikander not to waste his time, as many landlords won’t rent to Muslims.

“Even if you show your documents, police verification and local references, people suspect a single Kashmiri man,” he said. “They see single Muslims as potential terrorists.”

Muslim families may be shunned because they eat meat, but Sikander has found the opposite to be true too.

“Muslim landlords will often not rent to non-Muslims, because they suspect tenants would drink alcohol and eat pork,” Sikander said. He was even turned away by a fellow Kashmiri Muslim, because he is single.

“People think bachelors are unstable and undisciplined,” Sikander said. “No one is there to look after them and they have no one to look after, so they will party, host strangers, keep late hours.”

He has found that even neighbors and shopkeepers keep tabs on opposite-sex visitors of single men and women, while no one questions a married man.

Bhardwaj concurs that four out of five landlords will turn away single men because “they disturb the family atmosphere.”

“Nowadays single women do that too, there is no difference,” Bhardwaj said. “They drink and they party, so landlords avoid them as well.”

Kanika Jha, a development professional in Delhi, had heard many anecdotes about unmarried couples facing trouble while looking for apartments. Her fiancé made it clear to every broker and landlord that Jha would only move in once they were married in October.

“We told the landlord that we are happy to share our wedding card and our parents’ phone number if you want it,” Jha said. “We were overly cautious because we didn’t want to miss out on the good apartments.”

Many apartment listings specify that they are for “expats only,” renting exclusively to non-Indian tenants.

“A broker inquired if I was an Indian American, because that would be the only way I could rent an expat-only apartment I was interested in,” said Sharma.

Bhardwaj explained that landlords think foreign nationals are more reliable for regular rent payments. They pay for repair work themselves and the home suffers lesser wear because they tend to stay out and travel more. The rent, of course, is higher for expat apartments.

However, all foreigners are not viewed with favor. Delhi’s rampant racism seeps into apartment leasing as well.

One landlord shouted at the broker from the balcony for bringing “a black” the moment he got out of the car, and another rejected the man because he eats meat. One landlord began lecturing him about what was expected of him.

“He told me I shouldn’t bring women home, I shouldn’t drink alcohol and I shouldn’t host parties,” he said. “He lectured me like I was a kid and threatened to call the police directly if I violated any of his rules — that was very frustrating.”

Such extreme discrimination has caused the formation of black and Afghan neighborhoods in Delhi, as the apartment options are limited.

“Only those who are poor and own old houses rent to these people, as their entire income is now dependent on rent,” said Bhardwaj.