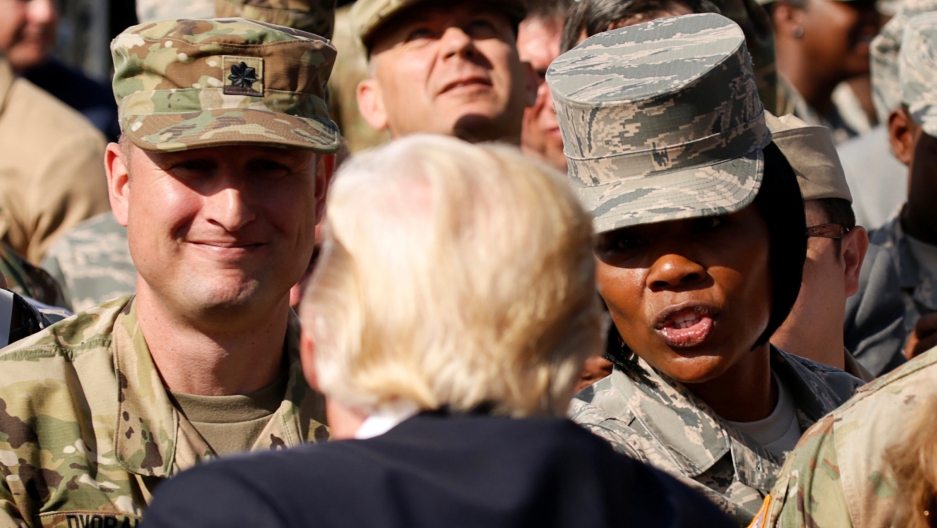 Right after the World Trade Center towers came down on September 11, 2001, Donald J. Trump got on the phone for a live television interview with WWOR, a local New York station.

“I have a window that looks directly at the World Trade Center,” Trump said. “I saw this huge explosion.”

“For years, I’ve looked right directly at the building. I’d see the Empire State Building in the foreground and the World Trade Center in the background. And now I’m looking at absolutely nothing. It’s just gone. And it’s just hard to believe.” Listen to the full interview from that day with Trump at Politico.com — it runs nearly 10 minutes.

One of the people in the TV studio asking Trump questions was Alan Marcus, a friend and former publicist for Trump. It was Marcus who asked the real estate mogul and native New Yorker a big political question.

“In the year 2000, Donald, you considered running for president. If you had done that, and if you had been successful, what do you think you’d be doing right now?,” Marcus said.

“9/11, the worst terrorist attack in our history was planned and directed from Afghanistan, because that country was ruled by a government that gave comfort and shelter to terrorists,” Trump told US military personnel in a speech in August, laying out his plans to send more American troops to Afghanistan.

This was one of many instances where you can feel the reverberations of the Sept. 11 attacks in Trump’s emerging foreign policy.

“I think Trump has tapped into and reflects that fear and anger many Americans felt immediately after 9/11,” says Brian Katulis, a senior fellow at the liberal Center for American Progress in Washington, DC.

Katulis sees the post-9/11 worldview at play in US foreign policy and with the administration’s approach on national security.

“It’s the ‘America First’ slogan, this notion of a gated community concept of security, that we have to throw up barriers to entry to this country, build walls [and] push people out that may not look like us,” Katulis says.

Katulis says Trump, “tapped into this broader American sense that we had expended a lot of resources in these places and tried to actually re-make them in our own image.”

“The thing that’s really curious about Trump” Katulis says. “He’s really stepped away from any sense of a moral values component of trying to defeat this threat.”

Last week, Trump was asked about Syria during a joint news conference in Washington with the emir of Kuwait, Sheikh Sabah Al Ahmad Al Sabah.

“As far as Syria’s concerned, we have very little to do with Syria other than killing ISIS. What we do is we kill ISIS,” Trump said.

If there’s a motto for this president’s foreign policy, it would be something along the lines of, “Doing more with less,” says Mike Doran, a national security expert at the conservative Hudson Institute.

“Nixon and the country, after the Vietnam War, was very skeptical about the use of the military abroad. Nixon realized that,” Doran says. “He started relying more on allies and building them up as sort of policemen who would look after American interests.”

Doran says Trump got off to a promising start with his first presidential trip to the Middle East, which included a headline grabbing photo op with officials in the Kingdom of Saudi Arabia.

“The sword dance in Saudi Arabia, and the trip to Israel that he also made at the time, indicated that Trump was going to rely much more on allies than President Obama had,” Doran says. “And those allies are primarily concerned with the rise of Iran.”

Doran says an enduring mistake with American foreign policy going back to Sept. 11 has been to focus too much on Sunni extremist groups like al-Qaeda and ISIS. President Trump appears to be more willing to confront what Doran calls, “the Shiite extremist state of Iran.”

“It’s our job to organize the region,” Doran says. “President Obama’s policy taught us that the problems of the Middle East don’t stay in the Middle East. If we leave the Middle East, those problems are going to follow us. Look at all of the refugees from Syria and the tensions they have caused in Europe.”

If President Trump does hope to, “organize the region,” it’s far from clear just how he plans to do so. And one thing that Katulis and Doran agree on is that Trump does not appear to have fully thought through all of the implications of where he wants to go with foreign policy.