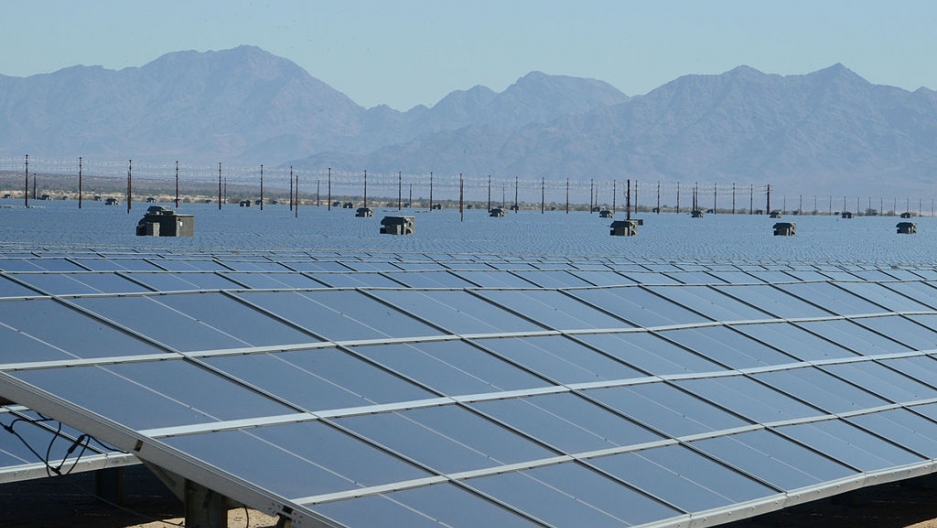 Courtesy of the US Department of the Interior

A new study finds that countries around the world could shift their economies entirely to renewable energy sources, such as solar, wind and hydroelectric, by the year 2050.

The researchers map out the blend of energy sources that each of 139 countries would need to completely switch their energy to electric power. The report was first published in the journal Joule.

“The idea here is to electrify all energy sectors — transportation, heating, cooling, industry, agriculture, forestry, and fishing — and provide that electricity with 100 percent wind, water and solar power,” says Mark Z. Jacobson, a professor of civil and environmental engineering at Stanford and one of the authors of the report.

Some countries will have a more difficult time than others, but Jacobson says for the bigger countries the transition should be easier than he thought.

Big countries have plenty of solar and wind resources, and just by electrifying they will reduce power demand because they eliminate the need to mine, transport, or refine fossil fuels. Thirteen percent of all energy worldwide is used for just this purpose.

An additional 23 percent reduction in power demand can happen because electricity is more efficient than combustion, Jacobson says. An electric car, for example, uses 80 percent to 86 percent of its electricity to move the car, with the rest being waste heat. Only 17% to 20% of the energy in a gasoline car goes to moving it; the rest is waste.

Thirteen percent plus 23 percent equals a 36 percent power-demand reduction, and Jacobson believes another 7 percent will occur due to end-use energy efficiency. So, compared to what 2050 would look like without changing to renewables, nations can reduce their power demand by almost 43 percent, just through electrification.

In the US, the power source blend will be mostly solar and wind, with about 4 percent hydroelectric, Jacobson believes. For wind, about two-thirds will be onshore and one-third offshore. Solar will be divided into rooftop solar, photovoltaics and centralized "concentrated solar power" plants, coupled with storage. In most cases, the electrical grid will need to be expanded, not necessarily changed, Jacobson notes. Specifically, we will need more long-distance, high-voltage direct current transmission and more storage.

A common question Jacobson hears is, "Since the US has so much open space, why not create giant, concentrated solar arrays in the desert and enormous wind farms in the Midwest and create a centralized power system?"

“It’s always a trade-off between transmission and storage,” Jacobson says. “We have great resources in the Great Plains [for wind] and in the southwest US for solar, but you have to transmit it to the coasts or to other places in the south. ... Sometimes storage might be less expensive locally.”

Since the Midwest is considered the "Saudi Arabia of wind," in some cases it might be cheaper to transmit power to the East Coast rather than use offshore wind. On the other hand, offshore wind costs are coming down so rapidly that it could end up being cheaper. Floating offshore wind farms, which are becoming more feasible, could also be a game-changer, Jacobson says.

On the local scale, there are already things people can do in their own home to help the transition to clean power, like replacing gas stoves with induction cook-top stoves that are extremely efficient, Jacobson says.

“There are heat pump air heaters, water heaters, air conditioners and refrigerators, which use about one-fourth the energy of old electric resistance heaters,” he explains. “They’re very efficient and they just run on electricity. Most people don’t need gas in their own homes anymore because of the efficiency of the electricity.”

Add in electric cars, solar panels and batteries that can be stored in the home and people won’t even need grid electricity most of the time — and prices for all of these things are coming down rapidly.

Industry will find the process somewhat more difficult, Jacobson says, especially for the high-temperature industrial processes that currently use fossil fuels. But, again, electric machines exist that can replace the old ones, he says.

“The benefits of all this is we eliminate four to seven million premature deaths from air pollution each year that are caused by combustion, primarily from fossil fuels and biofuels. We eliminate global warming. Even if you don’t believe in it, it’s there and we would eliminate it,” Jacobson says. “We stabilize energy prices [and] we have less terrorism risk because we have more decentralized power.”