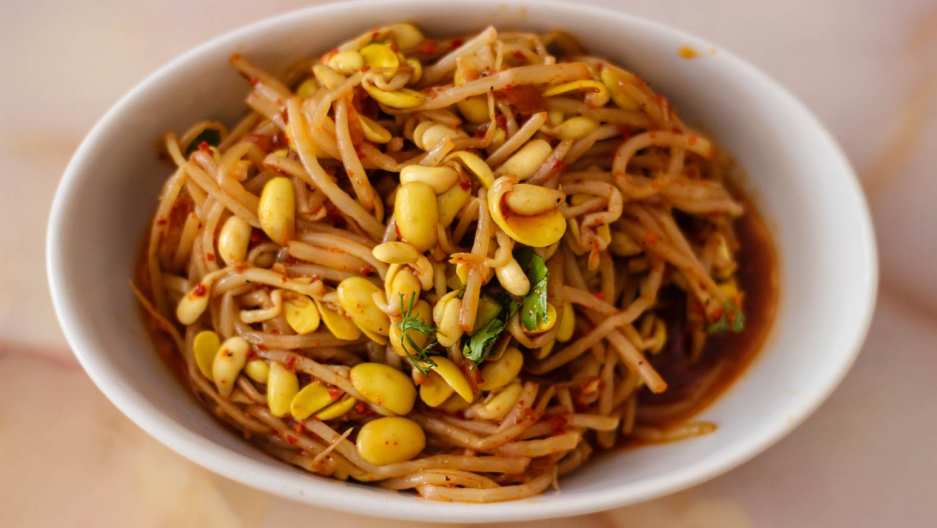 A Korean bean sprout dish, kongnamul muchim, gets an Uzbek spin (fresh cilantro) at Cafe at Your Mother-in-Law.

Over the past 50 years, Brooklyn’s Brighton Beach neighborhood has gained a nickname: “Little Odessa.” The first wave of Russians began immigrating here in the 1970s, followed by another spike in the 1990s, after the collapse of the Berlin Wall. Now, almost half the immigrant population in Brighton Beach comes from Russia and Ukraine.

The area is famous for its Russian shops and cafes and Korean cuisine is not something you expect to find on the menu. But on Brighton 4th Street, a well-loved local restaurant serves a fusion of Uzbek and Korean cuisine — and tells a little-known story about Russian history and migration.

Cafe at Your Mother-In-Law is a storefront with an orange awning. Inside, red paper lanterns dangle from the ceiling and a fridge full of salads in Tupperware is on full display.

When I ask the owner, Elza Kan, about her food, she immediately lights up and starts talking. But she only speaks Russian and a little Korean, so her daughter Svetlana translates for me.

Elza is ethnically Korean but was born and raised in Uzbekistan. You can find this out by reading her menu, which features a number of traditional Korean dishes with an Uzbek twist.

Her most famous dish is a sliced carrot salad marinated with salt, vinegar, oil and sugar — a satisfying mix of sweet and spicy — with hints of garlic and coriander. 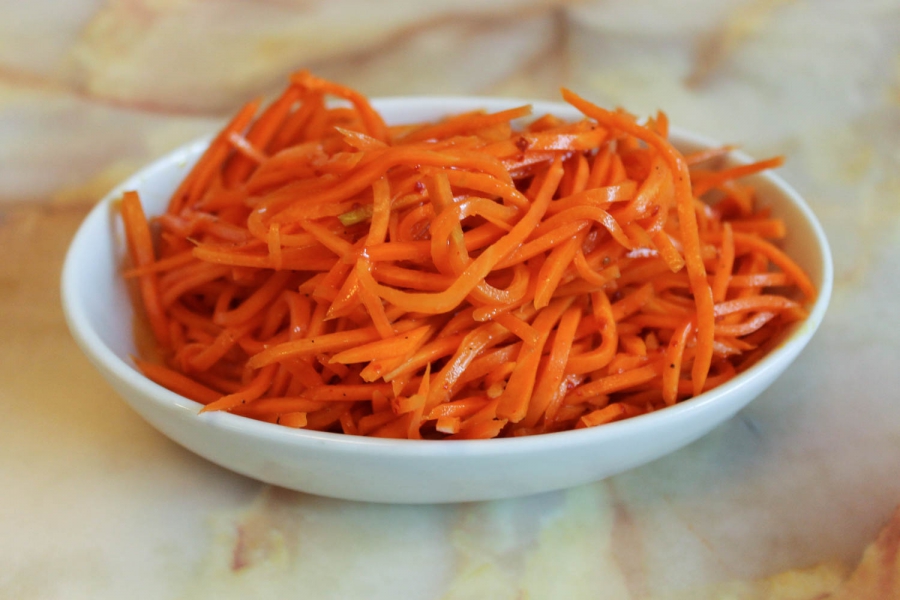 One of Elza Kan's signature dishes — a sweet and spicy shredded carrot salad.

Growing up with a Korean mother, I was exposed to Korean food from a young age. But before meeting Elza, I knew nothing about the history of Korean migration to central Asia. And I’ve never tasted anything quite like her food.

A menu item I do recognize is kongnamul-muchim, a bean sprout dish you see in a lot of Korean restaurants. But Elza’s version has a memorable addition: fresh cilantro.

It’s clear to me that Elza’s cooking is a way to preserve her Korean and Uzbek cultural traditions. But as her daughter, Svetlana, recalls, it was also a way to start over after losing her husband in 1994.

“She loved my dad so much, you have no idea. That was a beautiful couple,” Svetlana says. Elza’s husband died unexpectedly of a heart attack. Seven years later, Elza and her family decided to start over in a new country. She immigrated with her oldest daughter, Natalia, in 2001. Svetlana — with her husband and oldest son — followed a few years after. Only four years after arriving in the United States, Elza opened a restaurant.

The story of how Koreans ended up in central Asia is a complicated and painful one. During the Japanese occupation of Korea that lasted from 1910 to 1945, many escaped harsh conditions and restarted their lives in what became the Soviet Union. But in 1937, Stalin forced out more than 150,000 Koreans living in Russia. (Elza says her grandparents had already emigrated by the time of Stalin’s purge, first to Kazakhstan and then to Uzbekistan.)

In their new home, Koreans developed a unique place in Uzbek culture, and so did their food.

“In every market you can see Korean women selling those salads, which are the equivalent of banchan, or Korean appetizers,” says Victoria Kim, a scholar of the Korean diaspora, who’s also Korean Uzbek. “For Uzbeks, Korean food is not foreign food. It's actually like a national cuisine. It's part of our local food.”

Elza's kitchen is packed on Saturdays. The dining room fills quickly at lunchtime, with mostly Russian customers. For Elza, food is a means of expressing herself and finding her place in a new home.

“When she came here to America, she was trying to find herself. What she can do to make money, to survive, being actually over 50 at that time. That's how it started,” says Svetlana. “The first three or four years were very tough. She didn't know a word in English, and everything was so new to her. People, environment, measurements, lack of language. And she was struggling with that — with the fear of being in a different country.”

Elza chose to live in Brighton Beach, Svetlana says, “because she feels more comfortable” in a place where “90 percent of people speak Russian.”

She lives just a few blocks from the Brighton Beach boardwalk, in the heart of a Russian neighborhood. And despite her very Soviet upbringing, she says she feels “absolutely 100 percent Korean, from inside out.”

Mia Warren's story was produced with help from Feet in 2 Worlds, which brings the work of journalists from immigrant communities to public radio and the web.