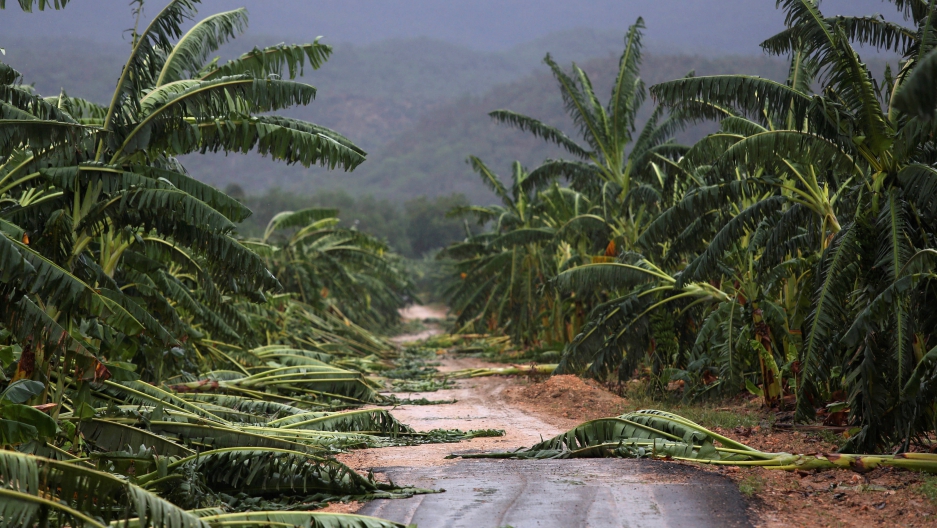 Fallen banana trees cover a roadside after the passage of Hurricane Matthew in Cuba's Guantanamo province in October 2016.

Hurricane Irma — one of the strongest storms ever recorded in the Atlantic — is hurtling through the Caribbean and headed for Haiti and Cuba, and then early next week on track to land in Florida and the Southeast US.

Experts and aid workers in Haiti say they're concerned that Hurricane Irma could devastate the impoverished country, which is still recovering from the damage Hurricane Matthew caused in September and October of 2016.

Jim Ansara is the CEO of Build Health International. His organization is active in the construction of health care facilities in Haiti and was involved in the response to Matthew. He worries that the impact of Irma in Haiti could be catastrophic and that Haitian officials won't be offering residents much assistance.

"The Haitian government, which is incredibly resource constrained, just does not have any kind of presence to help mobilize people, to get people to shelter, to clothe and house people after a disaster like this," he says.

That means Haitians aren't necessarily counting on government help in the event of a disaster.

"Haitians are incredibly resilient and resourceful. They work together very well in times like this, without a lot of support from the government or NGOs," Ansara adds.

Hurricane Matthew devastated wide swaths of Haiti last October. New reports estimate that about 1,000 people were killed, but Ansara says the actual number of casualties were likely much higher. "There are no statistics about how many children have died, how many adults have perished because of damage to health care infrastructure, because of malnutrition [caused by crop shortages due to flooding], on and on and on."  And there's a chance it could happen again.

In the adjacent Caribbean island — Cuba — residents are also preparing for an onslaught.

"These are the final few hours, perhaps, before the winds start picking up and the storm front starts heading fast this way," says the BBC's Will Grant. "People are bracing themselves."

Cuba has an admirable track record when it comes to hurricane preparedness.

"Partly it works here because people follow the instructions that the government gives out; they obey the evacuation orders. They go to the shelters if they're told to do so. There are, of course, consequences if they don't obey government orders," Grant notes. "I used to live in Mexico, and it was difficult to get people to obey the [government] instructions because they wanted to stay with their livestock; they wanted to stay with their properties."

Towns on Cuba's eastern tip are still struggling to recover from Hurricane Matthew which clipped the edge of the island last autumn.