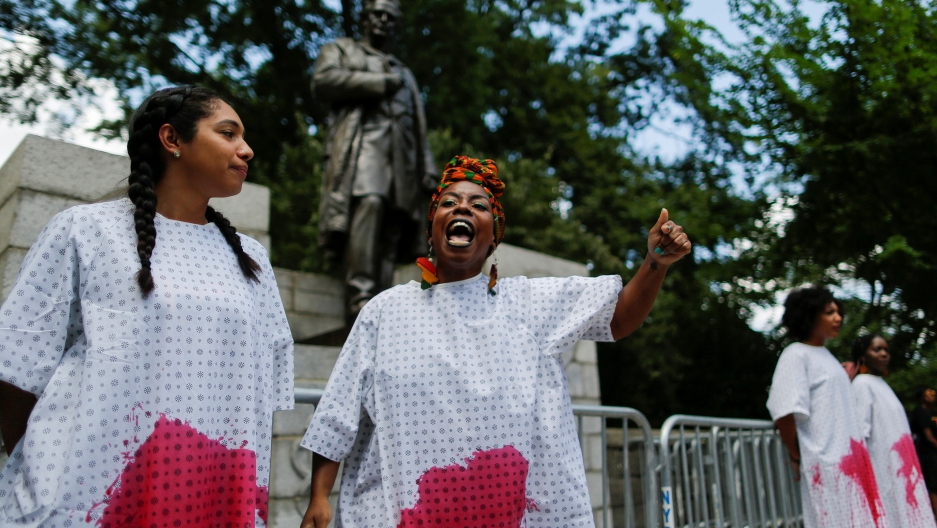 Women paint their bodies in red as they take part in protest against white supremacy in front of a statue of Dr. J. Marion Sims onat the upper east side of New York City.

Every day, Seshat Mack wakes up and takes the bus to school. She’s a doctoral student in science, from Harlem. Every morning, the bus drops her off in front of a statue of a man looking down kind of heroically, kind of benevolently at passers by.

Dr. J. Marion Sims, born in South Carolina, is considered the father of modern gynecology — a status memorialized in that statue. He started his work in the mid 19th century.

“[Childbirth] was pretty dangerous” back then, says Susan Reverby, a historian of medicine at Wellsley College. “There were also no antibiotics, the kinds of things we use now to protect women.”

Childbirth often caused an excruciating condition known as an obstetric fistula, a hole between the vagina and rectum or bladder. It was especially common among younger women, or women who had a lot of children.

“[Fistulas] often lead to incredible infection, and social isolation. They’re going to smell, they’re going to be uncomfortable. No one’s going to want to be around them. It changes their entire life,” Reverby explains.

Reverby says though all women got fistulas, slaves were particularly vulnerable. “Rape was part of the slave process. Very, very young women were giving birth and weren’t given proper care.”

In his practice in Alabama, Sims was looking for a way to surgically fix fistulas. He convinced slave owners to let him experiment on slaves who developed the condition. At that point, donating slaves to medicine was not an unusual thing to do.

Professor Martin Pernick is a medical historian at the University of Michigan. He’s written a lot about the history of racism in anaesthesiology.

“In 1817, a British medical journal published an article claiming that blacks were so insensitive to pain, that you could operate on them with as much impunity as you could operate on a cat or a dog, or a rabbit,” says Pernick. “Among women, if you are going to have to operate on a woman, 19th century doctors would have said — it’s much better to have black women, because they are less sensitive.” 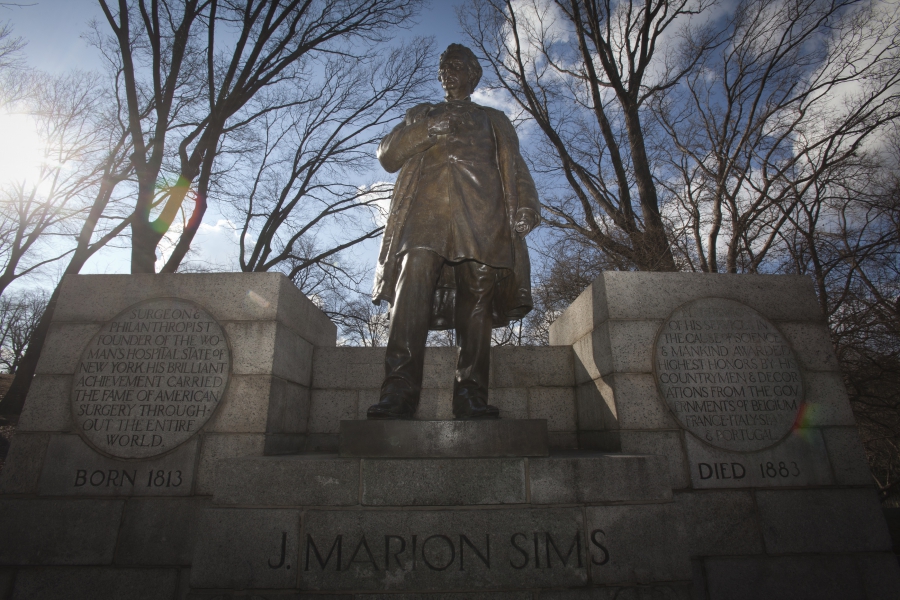 The Central Park statue of Dr. James Marion Sims is pictured along 5th Ave in the Manhattan borough of New York.

There are those who defend Sims' work. Dr. Leonard Wall, a professor of anthropology at Washington University in St. Louis, is one of Sims’ more vocal defenders.

“Sims is frequently portrayed as this Joseph Mengele, Nazi doctor type, doing horrible experiments on slaves who can’t consent,” Wall says. But Wall says he’s worked with fistula survivors in Africa and he says he’s seen first-hand how Sims' discoveries help millions of women in the developing world, even today.

Today, we know the names of a few of the women Sims experimented on. Lucy was around 18. Anarcha was about 14. And there was Betsy, too.

Wall says all three would have been in excruciating pain and desperate for relief when they arrived at Sim’s house.

“I think, that these were women who had terrible injuries,” he says. “They had deep, vested personal interest in having those injuries fixed. That’s not the history that’s being depicted in the demonstrations.”

Furthermore, Wall says there are some key pieces of the Sims story people leave out. It’s true, Sims didn’t use anaesthesia on the slaves he experimented on. But anaesthesia would not be widely used or available until a few years later. And Sims wrote that he asked the women he experimented on for their consent.

But that argument — the very idea that a slave can consent— is something that baffles activists like Seshat Mack.

“If not for the institution of slavery, J. Marion Sims would have been forced to postpone these experiments, until science caught up. The science of anaesthesia. The fact that there was a population of people who literally had no choice but to consent to these surgeries, meant this was something he didn’t have to concern himself with,” she says.

Mack is among those who have recently protested at the site of the New York City statue. She wants it removed. The city has responded by saying that it’s doing a review of several statues, including this one.

Mack smiles wryly. “That’s cute,” she says, calling it frustrating. But, every day, it greets her on her way to school — the statue of a man who experimented on women who looked like her. “White supremacy doesn’t always look like white hoods, burning crosses, confederate flags,” she says. “Sometimes it’s a doctor in a white coat.”

Sims finally solved the mystery of how to fix a fistula — silver. After about 30 failed surgical experiments on the slave named Anarcha, experiments performed without anaesthesia, he discovered silver wire sutures worked.

He was hailed as a genius of modern medicine. He moved to New York City, opened America’s first hospital for women and presided over the American Medical Association. He took on illustrious patients.

In 1867, he became the personal gynecologist of Empress Eugenie de Montijo, Napoleon III’s wife. He operated on her.

By then, he had begun using anaesthesia.