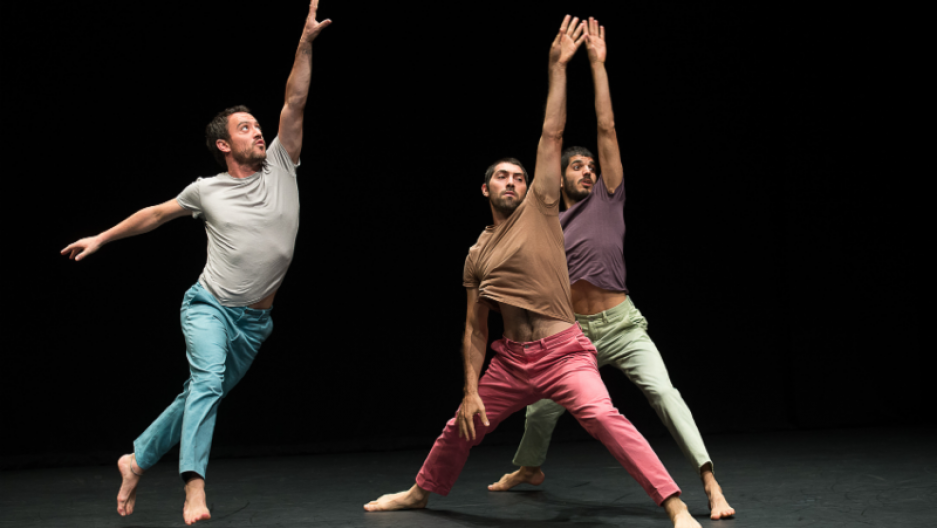 The dance "The Hill," by Roy Assaf, had its American premiere at the Jacob's Pillow Dance Festival this summer.

Sometimes, it feels like your life has come full circle.

For Israeli choreographer Roy Assaf, it was like that when he danced in his piece "The Hill," which had its US premiere this summer at the Jacob's Pillow Dance Festival in Becket, Massachusetts.

"The Hill" takes its name and inspiration from Ammunition Hill, the site of a brutal battle during the Six-Day War in 1967 between Israel and several of its neighboring Arab countries. The dance is a trio for male dancers, and it's about male bonding and war and the psychological effects of being in the trenches. And it’s set, as The New Yorker Magazine put it, “with a mix of sincerity and irony” to military songs and the Bee Gees.

Those are resounding themes for Assaf, who started dancing professionally while he was still in the army as part of Israel's mandatory military service.

One weekend during that period, Assaf, who never had any formal dance training — though, “I don’t remember a time when I was not dancing,” he says — went home to perform at his local community center. It was then that superstar choreographer Emanuel Gat spotted him and offered him a job. "When [Gat] tells the story, he says, 'I just saw you walking, and I fell in love with the way you walk,'" Assaf recalls.

For the remainder of his time in the army, Assaf would serve during the weekdays and go into the studio with Gat to dance on the weekends. "It was a magical time," Assaf says.

When Assaf's service ended in 2004, he immediately joined Gat's company. Since then, he's danced all over the world. It wasn't long before he began choreographing, as well, and he has since formed his own company, under his name.

Assaf says he didn't consciously set out to make a piece about "my experience in combat, my experiences as a soldier in the Israeli army," but it was probably inevitable. After all, he says, "all my pieces have my life experiences in them."

"The Hill" starts with three young soldiers goofing around. But then the mood shifts as the men begin to fight each other. They start kicking, pushing and shoving. As the music transitions from a nationalistic Israeli song called "Ammunition Hill" to “I Started A Joke” by the Bee Gees, the men break off into disconnected solos. At the end of the dance, the three men finish in very different places. "One is standing. One is lying on the floor. And one is walking outside of the stage," Assaf explains.

After one performance this summer, Assaf received a particularly touching email from a veteran's spouse. She told him that she spent years caring for a husband with post-traumatic stress disorder. And the dance spoke to her about that pain.

"You see," Assaf says, "[the ending of the dance] is a symbol." You bring all your life experiences with you when you see "The Hill," he says. And in the final moment, "you can choose what each man represents."