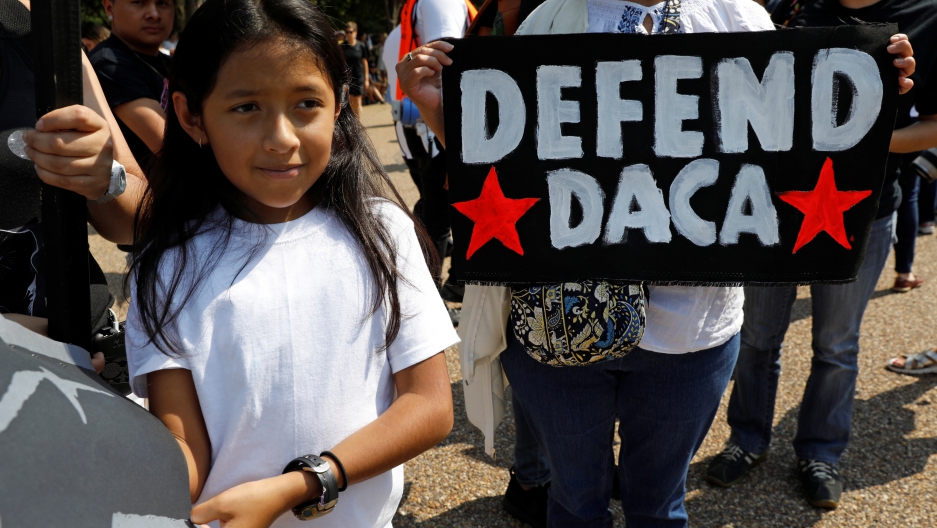 Demonstrators hold signs during a protest in front of the White House after the Trump administration on Tuesday scrapped the Deferred Action for Childhood Arrivals (DACA), a program that protects from deportation almost 800,000 young men and women who were brought into the US illegally as children, in Washington, Sept. 5, 2017.

When Barack Obama used his executive authority to create the DACA program, Deferred Action for Childhood Arrivals, back in 2012, the Rev. Gabriel Salguero decided to get behind the president’s effort.

“I supported it from its inception because I thought we were at a standstill in Congress,” says Salguero, pastor at Calvario City Church in Orlando, Florida, and the founder of the National Latino Evangelical Coalition.

Salguero went all in for DACA. He testified on Capitol Hill. He spoke out to the immigrant community, encouraging undocumented young people to come out of the shadows to sign up with the federal government program.

First of all, Salguero says, there were Biblical reasons for supporting DACA. He says Christian scripture is very clear about the need to care for the stranger, the refugee and the immigrant.

But beyond that, Salguero says these undocumented immigrants were people that he and his fellow evangelicals actually knew personally.

“These are our brothers and sisters, worshipping in our churches, going to our Sunday schools,” Salguero says. “They’re the playmates of our sons and daughters.”

“They’re also the missionary force of the growth of evangelicalism in America,” he adds.

Now that President Donald Trump has decided to wind down the DACA program, Salguero is one of many evangelical leaders calling on Congress to come up with a lasting legal solution for the approximately 800,000 recipients.

“I’m hopeful,” Salguero says, because Christian evangelicals, business leaders, and even members of both major political parties are speaking out.

“But the truth is that the historical record shows that [members of Congress] have been less than ambivalent. Some have been actually hostile and dragging their feet,” he says.

"Republicans, Democrats, & Independents support #EvangelicalsDefendDACA. It's NOT too late. The movement is growing." @salgueros @NalecNews

Trump has been able to count on the support of Christian evangelicals. They came out big time for him in November. But many prominent evangelical leaders have expressed their support for DACA recipients.

Congress should do the right thing and provide a solution for those who were brought here by parents as children. #daca

Of course, not all evangelicals are on the same page.

One group calling itself Evangelicals for Biblical Immigration has published an open letter, addressed to the White House and Republican leaders in Congress, that accuses some faith organizations of advocating an “open borders” policy.

“All lives matter,” states the letter. “We ask that you would first and foremost honor often forgotten American citizens whose families have served our nation for many generations, and the patient people who have applied lawfully to come here and to become citizens of the United States.”

“I don’t think anyone’s calling for open borders,” says Jenny Yang of World Relief, a group that works with refugees and immigrants, which describes itself as the humanitarian arm of the National Association of Evangelicals.

“We’ve always supported national security and border security,” Yang says. “The real issue has to do with, how do you make the immigration system work for Americans and for the future of America, knowing that many immigrants who’ve come in the past are a core part, not just of our economy, but our social fabric, especially within the church.”

It is true that many evangelicals, in particular white evangelicals, still support President Trump. Yang says that’s partly due to Trump’s positions on abortion, for example. But Yang adds that the predicament that “dreamers,” a label sometimes used for DACA recipients, now face highlights something a broad swath of evangelicals can also agree on.

“We don’t penalize children for the actions of their parents,” Yang says. “There’s a sense that we need to do everything we can to allow these dreamers to flourish in our country.”