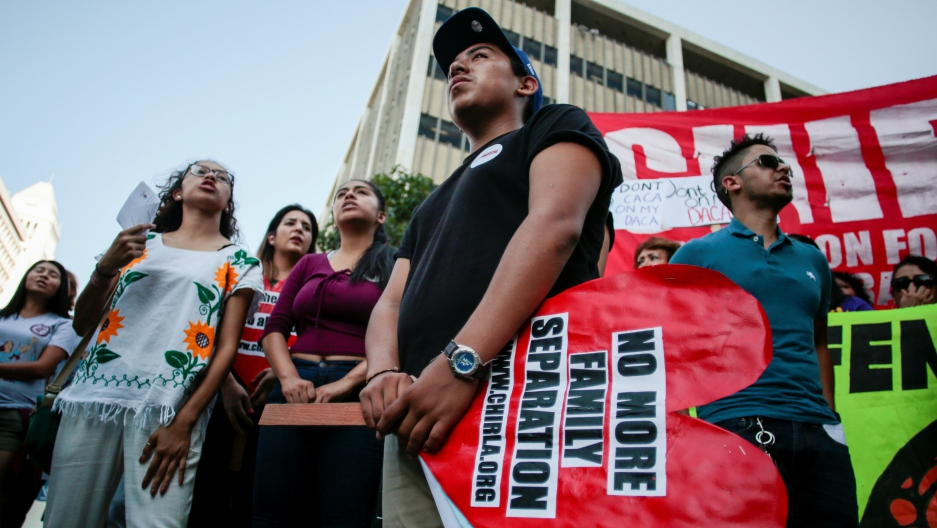 Axel, 15, the son of a Deferred Action for Childhood Arrivals (DACA) program recipient, stands with supporters during a rally outside the Federal Building in Los Angeles on Sept. 1, 2017.

President Donald Trump is expected to make an announcement Tuesday on the fate of the Deferred Action for Childhood Arrivals (DACA) program.

According to news reports, the president has decided to end the Obama-era program.

Since its creation in 2012, 800,000 immigrants who were illegally brought to the US as children have received temporary deportation relief, as well as permits to work in the US.

Scrapping the program would not only have devastating psychological effects on current DACA recipients and their families, but the potential to negatively affect the US economy, according to various studies.

“We estimate that the cost [to] the government in terms of reduced tax revenues would be $60 billion in the next decade,” said Ike Brannon of the CATO Institute, who co-published “The Economic and Fiscal Impact of Repealing DACA” in January. “The broader economic cost of shifting these kids into less productive jobs would be about $280 billion in the next 10 years.”

Brannon’s estimates are conservative when compared to similar studies about what ending the program could mean for the country.

According to research by the Center for American Progress, ending DACA would result in a loss of more than $460 billion from the national gross domestic product over a decade.

“We're going to take kids who would otherwise be college graduates and doing very productive jobs five or 10 years from now, and we're going to shove them into the illegal economy where they're not going to be paying taxes,” Brannon said. “And we can all say, ‘Well, they'll all leave the country.' But for the most part, it's very difficult for us to track these people down. So, in general, we're going to be taking a lot less tax revenue because of this.”

Listen to the full interview with Ike Brannon by clicking the "play" button above.

More about Trump's "wind down" of DACA and its economic impact.