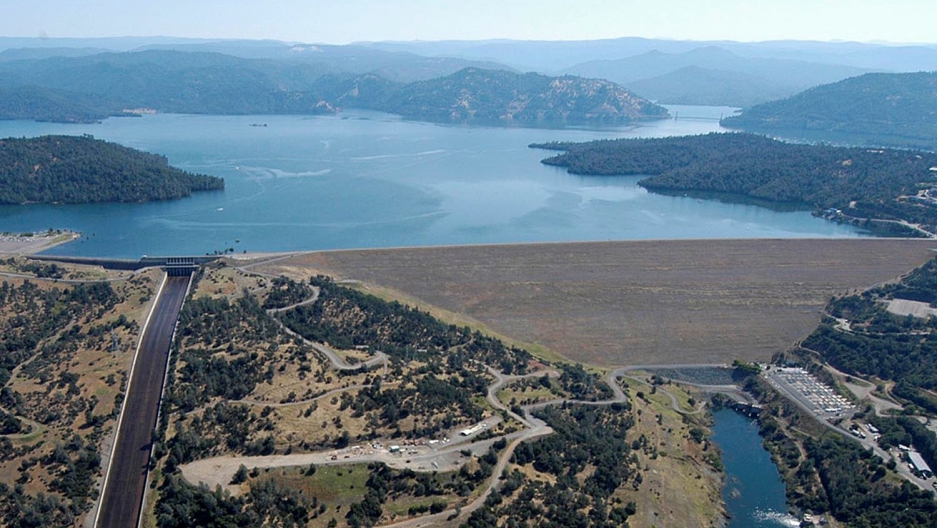 The Oroville Dam in 2005 is pictured here.

From day one of the Oroville spillway crisis in February, the California Department of Water Resources has never wavered in its declarations that, despite the disintegration of the massive concrete flood control outlet — and a near-disaster caused by uncontrolled emergency reservoir flows down a rapidly eroding hillside — the stability of the massive dam itself was not and has never been threatened.

Despite those oft-repeated assurances, public questions about the dam’s integrity have persisted — in internet forums, in community meetings and, most recently, in a report that came under the auspices of the University of California, Berkeley’s Center for Catastrophic Risk Management.

That’s both a reflection of public distrust of DWR after the spillway incident and a recognition that anything that seriously compromises the 770-foot-tall dam could endanger tens of thousands of lives, cripple a key element of California’s water-supply network and put the state’s entire economy at risk.

Specifically, the questions have focused on an extensive area of moisture on the left side of the dam’s downstream face that’s known, even to the Department of Water Resources, as “the green spot.”

The spot, characterized by what state inspectors have termed “lush” vegetation, which, during wet seasons, turns into dense thickets of dry weeds by late summer, is clearly visible on satellite images and measures about 700 feet long by 130 feet wide. That’s roughly the size of two football fields.

The study, led by internationally known civil engineer and risk management analyst Robert Bea, included several subreports asking whether the moisture at the green spot is a sign that water is leaking through the dam and weakening its inner structure.

Publicly, DWR officials have tended to dismiss those concerns. In response to questions at community meetings in Oroville and Yuba City in May, for instance, the agency said the green area is due to rainfall, that it first appeared while the dam was under construction, and that it poses no risk to the dam.

But outside public view, documents KQED obtained under the California Public Records Act show the Department of Water Resources has puzzled for years over the source of the seepage feeding the “green spot” and has been slow to act on a 2014 recommendation from independent experts to investigate the issue.

DWR’s uncertainty is reflected in a series of dam inspections that took place between February and July of 2011 — that was Northern California’s last wet winter before the five-year drought — which produced contradictory conclusions about the issue and whether it was a chronic condition or something that appeared only seasonally.

On Feb. 2, 2011, a DWR inspection party hiked to the green spot — about 200 vertical feet below the top of the massive structure — and found extensive moisture.

“The cause of the seepage has yet to be determined,” wrote Bill Pennington of DWR’s Division of Safety of Dams.

One possibility, he said, was rainwater may have collected — or become “perched,” in engineering parlance — within the dam’s embankment. Another possible source is an area of seepage that had been noted in the dam’s abutment during construction in the 1960s.

Pennington suggested that the area should be monitored and “unexpected changes should be reported to DSOD.” In a field notebook, Pennington wrote that Paul Dunlap of DWR’s Dam Safety Branch was “thinking of mapping the area.”

After a May 2011 inspection visit, Pennington wrote that “the long-established wet area at mid-slope on the left end of the dam remains active” and recommended continued monitoring.

In July 2011, with the lake level unseasonably high — less than 2 feet below the edge of the dam’s emergency weir — DWR’s Paul Dunlap returned to check out the green spot. He found it had “essentially dried up.”

“The drying out of the green spot (especially under high reservoir conditions) provides further evidence that the green spot phenomena on the dam is associated with precipitation or abutment seasonal spring activity and not seepage through the dam,” Dunlap wrote in a report on his findings.

Those periodic observations continued — sometimes the green spot was wet, sometimes dry — along with Pennington’s repeated recommendation that dam managers figure out how to monitor the area “so that year to year changes can be recorded.”

In August 2014, an independent board met to perform the dam’s five-year federal safety review. The board’s recommendations, released in December, called on DWR officials to investigate the green spot and try to determine whether it posed a threat to the dam.

“This issue has a high historical profile that needs to be conclusively addressed,” the consultants commented in one section of the Federal Energy Regulatory Commission’s 2014 Part 12D report.

The board said that while much of the dam’s behavior was understood, “one issue that seems to not have been addressed by previous stability analyses is that associated with the green spot on the downstream face of the dam.”

The consultants’ report noted that the final construction report for the dam, which went into service in 1968, indicated that the green spot area was observed even before Lake Oroville began rising behind the structure.

“The green spot is believed to be associated with pre-existing natural springs in the downstream left abutment area of the dam foundation,” the Part 12D report says. The concentration of moisture, the document speculates, could be due to the composition of the rock and earth used to build the dam’s downstream embankment. The fill, which may contain excessive volumes of very fine, dense material, “may prevent free drainage of flows from those underlying springs.”

The four consultants said that although there was no evidence of movement or instability in the green spot area, they recommended the Department of Water Resources investigate to see whether the persistent moisture could pose a risk to the dam, especially in the event of an earthquake during a period of particularly wet conditions.

In response, the Department of Water Resources has told the Federal Energy Regulatory Commission it intends to answer questions raised in the 2014 safety board report by September 2018.

The department last year got approval to bore a hole as deep as 150 feet in the dam’s left abutment, adjacent to the green spot area. The drilling was to pursue a separate issue raised by the safety board — the seismic vulnerability of Oroville Dam and nearby facilities. As part of that work, DWR told FERC, it planned to install an instrument for “monitoring groundwater levels in proximity (to) the historic ‘green spot’ within the dam embankment. Data collected may provide beneficial in understanding the origin of seepage within the left abutment.”

After a wave of questions raised by the UC Berkeley Center for Catastrophic Risk Management report, DWR says it’s preparing a preliminary report on the green spot as well as a longer-term study of the issue.

In response to questions about DWR’s response to the safety board recommendations or suggestions for monitoring made in the department’s own inspection reports, DWR spokeswoman Erin Mellon said regular monitoring was ongoing and that “to date, no issues of concern have been noted.”

Bea, the leader of the UC Berkeley study, says that DWR has been complacent in its response to a host of issues related to the dam, including the green spot.

“I think these people are looking at these pieces of evidence and using their logic, ‘Well, this dam’s been here for 50 years. We’ve seen these wet spots before, and it’s performed satisfactorily,’” Bea said. “What they’re then concluding is that as you move forward into the future, it will continue to perform satisfactorily. That conclusion is premised on a belief there won’t be any changes as you move into the future.”

Bea says that posture is similar to the one the department took to the dam’s spillway. The imposing concrete structure had undergone several rounds of extensive repairs before it failed in February. Despite that history of recurring problems, there’s no evidence that the department considered the possibility that the spillway might need to be rebuilt, and DWR inspections through last August consistently declared the structure fit for continued use.

“They kept thinking [that despite] these early warning signs — ‘Yeah, they’re unusual, we’ve got to put concrete patches on those cracks. And yeah, there are voids under the concrete that we’ll fill with concrete’ — it’s going to remain stable,” Bea said. “That proved to be disastrously wrong.”

This story and interview were featured on Science Friday’s series The State of Science, which showcases science stories from public radio stations across the United States. The story was originally published in July on KQED Science.