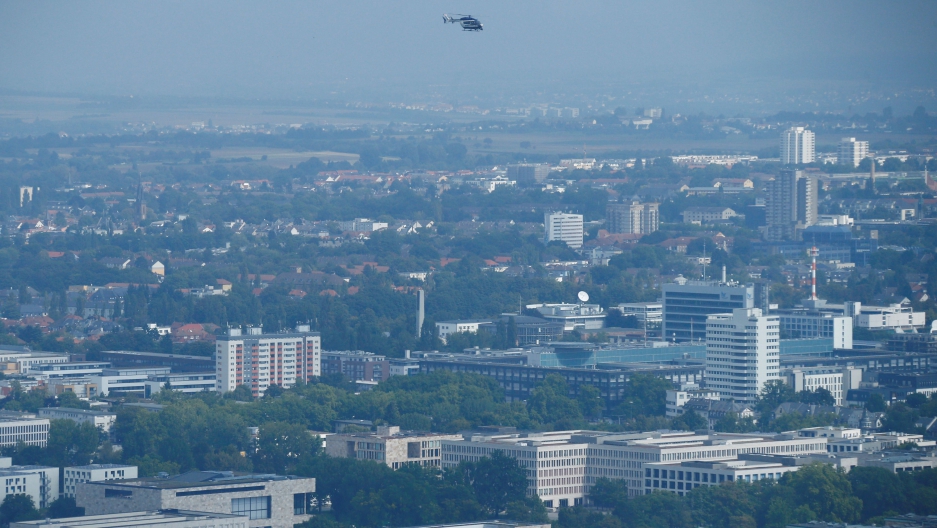 Police use a helicopter to observe the danger zone as 60,000 people in Germany's financial capital evacuate the city while experts defuse an unexploded British World War II bomb found during renovations on the university's campus in Frankfurt, Germany, Sept. 3, 2017.

At least 60,000 people were forced to leave their homes in central Frankfurt on Sunday as Germany begins an operation to defuse a huge unexploded World War II bomb dubbed "blockbuster."

The operation is the biggest evacuation of its kind in post-war Germany, Frankfurt's security chief Markus Frank said.

The 1.8-tonne British bomb, which German media said was nicknamed "Wohnblockknacker" — or blockbuster — for its ability to wipe out whole streets and flatten buildings, was discovered during building works last Tuesday.

Police have since been guarding the bomb site, which is close to the city centre and just some 2.5 kilometres (1.5 miles) north of the main Zeil shopping area.

Homes and buildings within a 1.5-kilometer radius of the site were supposed to be cleared by 0600 GMT, but some people were still in the evacuation zone well past the deadline as police carried out door-to-door checks.

At one building where officers were ringing the doorbells and using loudspeakers to announce the evacuation, a man and a woman emerged, saying they were unaware they were in the affected district.

At midday, emergency services were still unable to give the all-clear for the bomb disposal units to move in.

After a delay of at least two hours, experts were finally able to start disarming the bomb, an HC 4000, a high-capacity explosive used in air raids by Britain's Royal Air Force during World War II.

Some elderly residents affected by the evacuation recalled poignant memories of the war.

"I was here in Frankfurt's Westend during the war. I heard the bombs falling when I was in the basement, and I helped to extinguish the fires. So I knew how it feels and for me, it's not a new experience," said Doris Scheidt, 91.

Another resident, Eva Jarchow, said the evacuation "reminds me of our flight from Berlin when the bombs were still falling during the war. Here, at least, it's calm and sunny."

Giesela Gulich, meanwhile, had a "queasy feeling about it [as] the bomb stayed in the soil for so long, but now, when it's being moved, you don't know what can happen."

Others had packed their bags and were ready to head out for a full day, as residents are required to stay away until around 1800 GMT.

David Hoffmann, 29, who works at a bank, was loading up luggage in his car.

"I have the essentials with me — the most important documents," he said, though he complained that he had not received any leaflets about the evacuation.

The Westend district is home to many of Frankfurt's top bankers, including European Central Bank chief Mario Draghi — who is known to spend his weekends away from the German city.

Two major hospitals are also within the evacuation zone, including one with an extensive newborn ward. Staff at the affected hospitals had transferred patients and infants to other medical centres on Saturday.

Although police have said there is no immediate danger, the bomb's huge size prevents them from taking any chances during the disarming process.

More than 70 years after the end of the war, unexploded bombs are regularly found buried in Germany, legacies of the intense bombing campaigns by the Allied forces against Nazi Germany.

On Saturday, 21,000 people had to be evacuated from the western city of Koblenz as bomb disposal experts defused an unexploded American World War II shell.

In May, 50,000 residents were forced to leave their homes in the northern city of Hanover for an operation to defuse several WWII-era bombs.

And one of the biggest such evacuations took place on Christmas Day 2016, when another unexploded British bomb, containing 1.8-tonnes of explosives, prompted the evacuation of 54,000 people in the southern city of Augsburg.