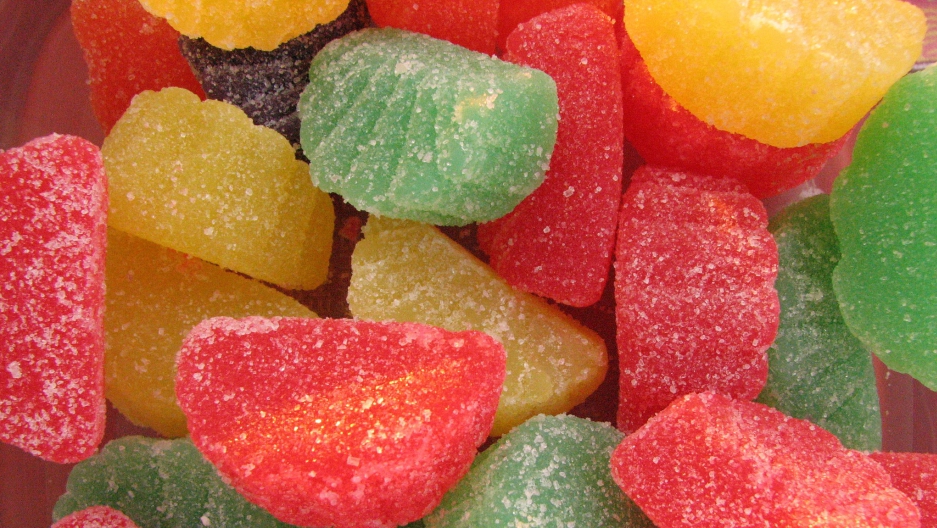 An assortment of fruit-flavored candy is shown here.

What do icy cherry popsicles, sweet grape sodas and sticky banana taffy have in common?

For one, we don’t expect them to taste much like the real fruits they’re meant to mimic — but their artificial flavors are familiar and intense, all the same. Where did these fake fruit flavors come from, and why, in 2017, do they still taste so little like the real thing?

As it turns out, we have history to thank. “The synthetic flavor industry goes back to the middle of the 19th century, which a lot of people don't realize,” says artificial flavor expert Nadia Berenstein, who recently completed her PhD in the history of flavor science at the University of Pennsylvania. Below, she boils down the sweet stories of a few favorite flavors.

“I like to think of the artificial cherry flavors that we find in things like popsicles and cheaper hard candies as ‘heritage’ or "heirloom" artificial flavors,” Berenstein says, “because they give us a kind of glimpse into the flavor worlds of the past.” She explains that while today’s flavor chemists can formulate realistic cherry flavors, the fake ones used in common frozen treats, candies and sodas are inspired by a long historical tradition.

In the 19th and early 20th centuries, scientists didn’t have the means to analyze flavor chemicals in fruits, which are present in very small quantities. Instead, Berenstein says, they took available chemicals, like synthetic esters, and “seized upon sensory resemblances” between the chemicals and fruit flavors. Artificial cherry flavors mainly came from esters, she says — which back in the day had some pretty dubious origins.

“Esters were generally produced from either byproducts of alcohol distillation or sometimes chemicals that were produced as byproducts of the coal industry,” Berenstein says. “So, there were kind of a limited number of different chemicals that they were using, and they would recombine them in different ways to imitate various fruit flavors.”

Some flavor chemicals could even represent more than one flavor. As Berenstein explains, benzaldehyde, a compound used in some heirloom cherry flavors, is also found in essential oil of bitter almond. (It’s known for its distinct almond odor.)

“The reason for that, I think, is that in in the late 19th century, cherry flavor was more often associated with wild cherries and with cherry liqueurs like maraschino liqueur, which had more of that kind of pit flavor,” Berenstein says. “You find the benzaldehyde molecule actually in cherry pits and stems.”

“OK, so this is a kind of crazy story that I found hidden in a manuscript in an archive,” Berenstein says, explaining that around 1910 or 1911, a man was riding a streetcar in Indianapolis when the unmistakable scent of Concord grapes wafted past him. It was the perfume of a woman sitting nearby.

“This was important to him because he was a maker of flavoring extracts for bottled sodas and for soda fountains,” Berenstein says. “So, he went through chemical catalogs, and he found the chemical in question, methyl anthranilate.” In Germany and Austria, the chemical was being sold as synthetic neroli, or orange blossom essence.

But if chemists in Germany and Austria were marketing methyl anthranilate as a floral scent, why did a chemist in America smell grapes?

“I think the reason is that methyl anthranilate is a flavor compound in American grapes, in Vitis labrusca grapes, which include Concord grapes,” Berenstein says. “And it's not found in European grapes, in Vitis vinifera grapes. So, the manufacturers of this synthetic compound in Germany and Europe wouldn't have noticed the resemblance with grapes because they were eating a different kind of grape.”

But to an American chemist, the resemblance was unmistakable. He began using methyl anthranilate in grape flavors, “and there was kind of a boom in grape-flavored sodas in the teens,” Berenstein says.

Before the 1950s, a banana called Gros Michel was the widely available commercial banana variety in the United States, Berenstein says. But “banana cultivation is a monoculture,” she adds. “And in the '50s, it was sort of a combination of various kinds of fungal plagues that caused the Gros Michel to be replaced with the banana that we know now — Cavendish.”

She explains the Gros Michel banana, which you can still find some places, has more of a compound called isoamyl acetate, associated with “fake banana” flavor than the Cavendish does. So, long ago, the bananas we ate may have actually tasted a bit more like today’s artificial banana flavoring.

“One of the most astonishing things about that is that isoamyl acetate-based banana flavors were being sold and used and were actually quite popular in the United States at least 10 years before bananas were widely commercially available,” Berenstein says. “So, you see banana flavor in the US in the 1860s, but bananas as a kind of widely available commercial product generally are associated with 1876, the Philadelphia Centennial.”

The end result? Many people probably tasted synthetic banana-flavored candies before they tried a real banana, she says.

But of all the artificial fruit flavors out there, Berenstein loves a classic one best: “I’m partial to fake grape,” she says. “That's how I got started on this research project, and it still brings back nostalgia.”