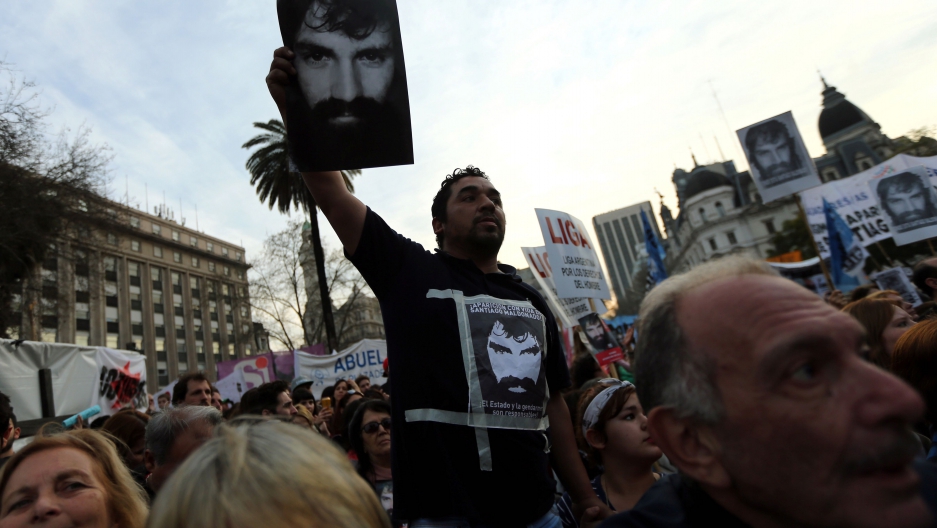 A man holds up a portrait of Santiago Maldonado, a protester who has been missing since security forces clashed with indigenous activists in Patagonia one month ago, during a demonstration to demand actions to find him in Buenos Aires on Sept. 1, 2017.

The case of an Argentine activist for indigenous rights whose family says he disappeared while in police custody is raising dark memories of the country's years of dictatorship.

Everywhere from hospitals and bus stations to football grounds, signs have appeared reading: "Where is Santiago Maldonado? The state is responsible."

Campaign groups say Maldonado, 27, was detained by state forces on Aug. 1 after joining in a protest march by the Mapuche indigenous group.

On Friday, marking a month since his disappearance, mothers with babies, retirees and students joined a rally for Maldonado in Buenos Aires' Plaza de Mayo — the symbolic site of protests for victims of the dictatorship.

"This transcends the issue of political affiliation," said demonstrator Aepa Espinoza, 45, accompanied by his wife and two small children who held a picture of Maldonado.

"This case shows that there are deep divisions in the country because we should all be here," he said.

For decades, relatives have been rallying on the square for the thousands of people killed or "disappeared" by the military regime from 1976 to 1983.

Campaigners say 30,000 people were victims of forced disappearances under the dictatorship — and hundreds of others even afterward.

The Coordinator Against Police and Institutional Repression, a nongovernment campaign group, says 210 people have disappeared while in police custody since the dictatorship ended.

But the case of Maldonado is the first one where state institutions, rather than individual officers, have been seriously accused of involvement in a disappearance.

He is said to have last been seen being put into a military police vehicle by officers who broke up a demonstration in the southern province of Chubut.

"Santiago was taken to the Gendarmerie," said Stella Maris Peloso, Maldonado's mother, who dismissed the notion of her son being a political militant.

The accusations of state responsibility in Maldonado's disappearance have been vociferously backed by campaign groups, including the Grandmothers of the Plaza de Mayo.

The Grandmothers have campaigned for decades for the victims of the country's 1976-1983 dictatorship. Ex-military leaders from that era, including former dictator Jorge Videla, were sentenced to life in prison in 1985.

"It is tragic that in this, our country's longest ever period of democracy, we should have to report the forced disappearance of a person," the president of the Grandmothers, Estela de Carlotto, told a news conference last month.

Norma Rios, president of the Permanent Assembly of Human Rights, added: "This is clearly the forced disappearance of a person by a state entity."

In a polarized country still haunted by the military dictatorship, backers of President Mauricio Macri accuse supporters of the previous government of Cristina Kirchner of putting together a campaign to discredit the government by comparing its actions with that of the dictatorship.

The lack of answers and the defense of the paramilitary Gendarmerie's actions in breaking up the protest by Security Minister Patricia Bullrich have added to the atmosphere of injustice surrounding Maldonado's disappearance.

Bullrich maintains that tracking of the missing activist could not be conducted in time and accused members of the Mapuche community of putting obstacles in the way of the security forces' efforts to find him. She has even cast doubt on whether Maldonado took part in the demonstration at all.

For Amnesty International, the state has a clear case to answer.

"The state must make every effort to find Maldonado, even more so if it is taken into account that Santiago disappeared in the context of a social protest where Gendarmerie intervened," said Mariela Belski, Amnesty's executive director in Argentina.

The demonstrators had been demanding the release of a jailed Mapuche leader.

He arrived in Patagonia as a backpacker, and joined the demonstration purely out of a sense of social justice, his family and friends say.

The Mapuche are considered the earliest inhabitants of parts of Argentina and Chile.

Their numbers were reduced after the Spanish conquest and subsequent independence of the countries. They have since pursued historical claims against the authorities for territory and rights.

A small Mapuche community in Chubut is claiming territory in an area of land bought by Italian fashion magnate Luciano Benetton two decades ago.