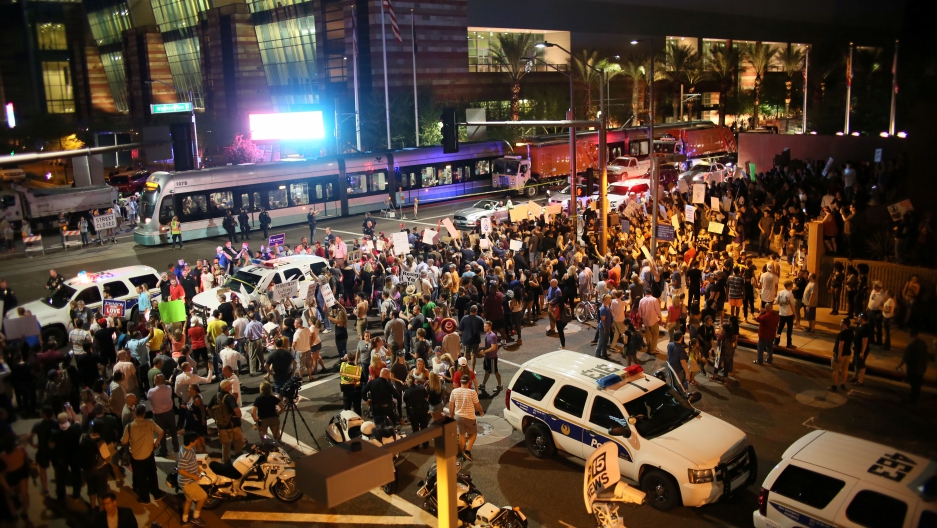 Pro-Trump supporters face off with anti-Trump protesters outside a Donald Trump campaign rally in Phoenix, Arizona on Aug. 22, 2017. Speakers lined up at a city council meeting on Aug. 30 to testify about how police handled the protest.

At a city council meeting in Phoenix Wednesday night, more than 200 people spent five hours describing what they called “police brutality” during a rally for President Donald Trump.

Pro-immigrant and human rights group PUENTE led the unprecedented takeover to denounce how local police handled themselves with protesters.

A diverse crowd of more than 200 people described the use of rubber bullets, pepper spray and tear gas against families. There were stories of people receiving first aid and peaceful participants who were caught in what they described as a “riot” started by police without warning.

“You went on national TV and tell people that it was a success, because people were able to go home safe. Perhaps you don’t understand the definition of safety, but we do and we do not feel safe,” she told the mayor. “We have no trust for the Phoenix Police Department. This police department has a history of violating [our constitutional rights] and using excessive force.”

The outcry came alongside national news about how police departments are outfitted and anxiety about violence during the protests in Charlottesville earlier this month. US Attorney General Jeff Sessions announced on Monday that the Trump administration was lifting limits on the type of surplus military equipment — including grenade launchers, bayonets and armored vehicles — that could be transferred to police departments. Trump’s executive order revokes a rule issued by President Barack Obama that was intended to increase trust between community members and local law enforcement.

Sessions said at a conference of the Fraternal Order of Police that "we will not put superficial concerns above public safety."

It also occurred less than a week after former Maricopa County Sheriff Joe Arpaio was pardoned by the president. Arpaio disobeyed a federal judge’s order to stop detaining undocumented immigrants with no criminal charges. The pardon was a slap in the face for Latinos and immigrant rights groups who saw it as a blank check for law enforcement to abuse minorities without accountability.

The ripple effects of that discontent were felt during the city council meeting. A police force that is seen as militarized was not welcomed by most speakers. The meeting usually has 15 minutes of public comments but residents demanded to continue speaking. They chanted, “Shame on you!” and called on the mayor hear them out.

At one point, after the public comment period was technically over and residents continued speaking with the microphone off, Stanton walked out, igniting greater protest. He returned minutes later.

“It is the responsibility of the police in our community to protect and serve all of the citizens of our community, not just some,” said pastor Crystal Lutton from the Chloe’s House congregation. “I’m a citizen. I was not protected and served, and neither was anyone there for the protest.”

Lutton said she was tear gassed during the rally, which she attended with her family.“When you militarize our police force, there’s no one for them to go to war with, except their own citizens,” she said.

About three hours into the meeting’s takeover, a handful of speakers pushed back on the criticisms of police. By then, a long line of potential speakers had formed and the crowd grew larger. Some people had to watch the meeting from an overflow room in the building.

“The only time I see problems is when the left shows up. It’s  when they show up and they block roads and people have to get arrested,” said Angie Stamm, a Trump supporter who attended the rally. “I was a Tea Party protester. I never got pepper sprayed, I never got tear gassed.”

Among the speakers, there were people from different ethnic backgrounds and religions who continued to describe the night of Aug. 22.

“We couldn’t digest what was going on,” Maricruz Ramírez said in Spanish. She identified herself as an immigrant from Mexico and a member of PUENTE. She said she ran from tear gas with her two daughters. “My daughters were trembling, my daughters were lost. When we got home we started talking and they cried.”

Ira Yedlin a 70-year-old man who came to the rally from Bisbee, Arizona, three hours from Phoenix, testified that he was hit in the face and several parts of his body with what he described as “projectiles” that might have been rubber bullets.

“I have never seen a more outrageous response from a police department, toward those of us who were non violently protesting,” he said.

“Yes, I’m a woman stupid enough to bring my children to a protest,” said Kate Resendiz. “What is worse and breaks my heart is that I live in a city stupid enough to fire bullets at peaceful protesters.”

“History will remember the City of Phoenix response to what happened on Tuesday,” said Ybarra, who called for a community based investigation on the events that night.

The city council was scheduled to vote on commissioning an independent investigation of the use of force by OIR group, a private firm in California. But residents and activists at the meeting criticized the firm’s connections to police chief Jeri Williams and said the investigation would be biased.

“I think a great organization like the City of Phoenix like, the Phoenix Police Department, becomes stronger when we do something like independent assessments,” Stanton said after five hours of testimony.

But the city manager withdrew his support for the review and the city council did not vote on the item.

The Phoenix Police Department has said that it is conducting its own review on the incidents of the Trump rally on Aug. 22. The city manager also announced during the meeting that the police would hold a series of public meetings to get testimony from the public.