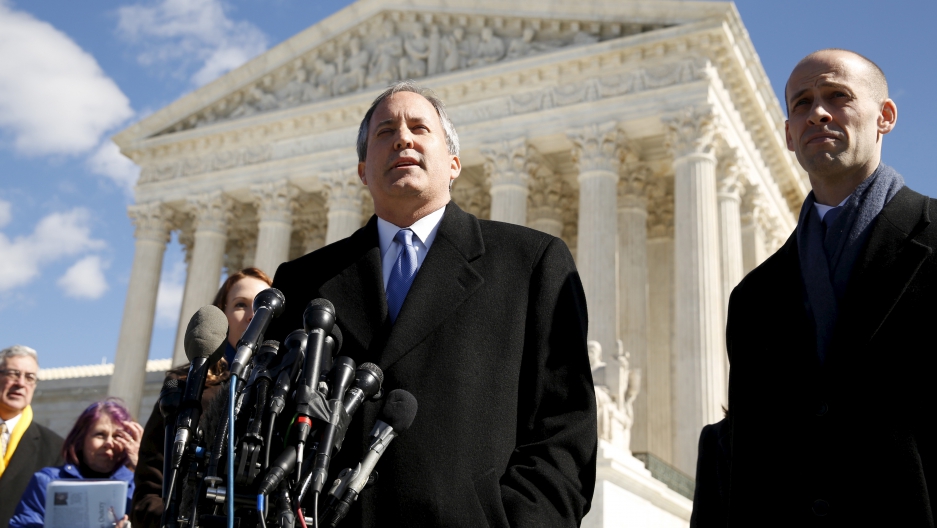 Texas Attorney General Ken Paxton addresses reporters on the steps of the US Supreme Court in March, 2016. He's leading a group of attorneys general who are asking President Donald Trump to rescind DACA, Deferred Action for Childhood Arrivals, which provides work permits and temporary relief from deportation to people brought to the US illegally as children.

President Donald Trump, facing a deadline from some Republican officials, is once more weighing the fate of a generation of undocumented immigrants whose parents brought them into the US as children. A decision is expected before a Sept. 5 deadline set out in a lawsuit being prepared by those officials.

Immigration advocates and opponents alike are bracing for an end to Deferred Action for Childhood Arrivals, or DACA. The Obama-era program has granted two-year work permits and reprieves from deportation to almost 800,000 undocumented people. In the last week, reports have emerged that Trump will shut down the program in response to a lawsuit threatened by 10 state attorneys general and one governor.

Update: Here's what you need to know about the "wind down" of DACA

But just what DACA’s end could look like is anyone’s guess. Immigration advocates are trying to prepare DACA recipients for several different outcomes, ranging from immediate repeal to lengthy litigation that could take more than a year, during which their futures could be uncertain.

“We’re trying to avoid panic, but a worst-case scenario is to revoke or rescind the work permits and use that information for immigration enforcement, meaning possible deportation and detention,” said Sally Kinoshita, deputy director of the San Francisco-based Immigrant Legal Resource Center, which published a guide for DACA recipients on Monday. “On the immigrant rights side, we are going to use all avenues — from litigation, to advocacy to public policy messaging — to resist going back on a promise for young people who had the courage to come forward.”

Trump has wavered in his position on DACA. On the campaign trail, he promised supporters he’d end the program on “day one” in office and called the protections “unconstitutional executive amnesty.”

But at a press conference in January, Trump seemed to hint at a compromise.

“We’re going to show great heart,” he told reporters. “DACA is a very, very difficult subject for me.”

The McClatchy news organization has reported that White House officials were encouraging the president to use protection of DACA recipients as a tool to bargain with Congress for other measures, such as funding for a southern border wall and curbs on legal immigration.

The attorneys general, led by Ken Paxton from Texas, said in a letter to the Department of Justice in June (PDF) that they would challenge the DACA program in court if Trump did not rescind it by Sept. 5. The group previously challenged another Obama-era program, Deferred Action for Parents of Americans, in a case that came before the Supreme Court last year. Their original filing in Texas federal court argued that DAPA (and an expansion of DACA) was an overreach of executive authority. Lower court judges agreed with the plaintiffs and without a ninth judge, the Supreme Court deadlocked 4-4, effectively halting DAPA and DACA’s expansion.

Trump officially rescinded DAPA when he took office in January. Until now, he has left DACA intact.

Paxton’s group argued that ending DACA would not require the Trump administration to immediately rescind any DACA permits that have already been issued, alter immigration priorities or “remove any alien.”

Indeed, the likeliest — and easiest — option, experts say, would be for Trump to phase out the program gradually. They could set a date by which the Department of Homeland Security would stop taking new applications or renewals. In practice, this would mean DACA beneficiaries would lose their protection from deportation. They would still have the right to work until their permits expire between now and Aug. 2019.

“Then people would revert back to whatever situation they had before they had DACA,” explains Memphis-based immigration attorney Lily Axelrod. “Some of them already have final removal orders from courts and could be deported. They are in the biggest danger. For anyone else ... they would fall into limbo.”

Trump could also immediately revoke DACA recipients’ work permits. But that would require considerable manpower; federal employment laws require the government to cancel them one by one, according to Charles Kuck, an immigration lawyer in Atlanta.

In a third scenario, the administration could continue issuing DACA work permits — triggering the Republicans’ court challenge — then decline to defend the measure in court. (In April, US Attorney General Jeff Sessions said he could not guarantee protections from deportation for DACA recipients. He fiercely opposed the program as a senator.) That could prompt immigration advocacy groups to argue on the government’s behalf that the president, regardless of whether he supports the program, has the power to implement it. And depending on how the case plays out, DACA could be halted — or not — while it’s being litigated.

A spokesperson for US Citizenship and Immigration Services declined to comment on DACA’s future. “The program is still under review by the administration,” he said in an email. USCIS has received applications from almost 900,000 people since DACA began in 2012 (PDF).

Ninety-one percent of DACA recipients are employed, and ending the program would cost the US economy $460.3 billion over the next decade, according a study by University of California, San Diego political scientist Tom Wong. Survey data was collected by Wong, the Center for American Progress, a liberal think tank, and immigrant advocacy groups.

Roy Beck, the executive director of Numbers USA — a group that advocates for a reduction in immigration, said the group favors a gradual phaseout. That would give employers time to find US citizens to fill positions that open up as DACA work permits expire.

It’s “unfair” for DACA recipients to hold those jobs, he said. “Why is it that DACA people should have those jobs instead of Americans?” he said.

But that’s little help to DACA beneficiaries like Erendira Rendon, a 32-year-old community organizer for The Resurrection Project, a nonprofit in Chicago’s Pilsen neighborhood.

“I have never felt so anxious before about my immigration status, even before I got DACA,” said Rendon, whose parents brought her to the US from Mexico when she was 4. “I’m thinking, ‘How am I going to keep working and support my family?’”

Her organization will host four DACA information sessions next month; the first scheduled Sept. 5, the day of the deadline in the lawsuit. They will inform undocumented youth of their rights under various scenarios for DACA and lawyers will screen attendees to see if they are eligible for other types of legal relief. Some people, for example, might be eligible to remain in the US with green cards or based on marriage- or employment-based petitions.

Meanwhile, immigration lawyers are advising their clients not to open their doors to Immigration and Customs Enforcement officers unless they have a warrant signed by a judge that they can slip under the door. They are also advising them to obtain any form of official identification available to them, such as driver’s licenses or municipal ID cards, as well as Social Security numbers, which can be used for housing, banking and educational purposes, even if DACA work permits expire.

Asked whether this is the biggest-ever threat to DACA in its five-year history, Axelrod said, “Yes. Unequivocally yes.”

“I’m trying not to spread panic before we actually see the announcement,” she added. “It’s not over until it’s over.”

More: Young, undocumented and trying to 'keep my sanity'