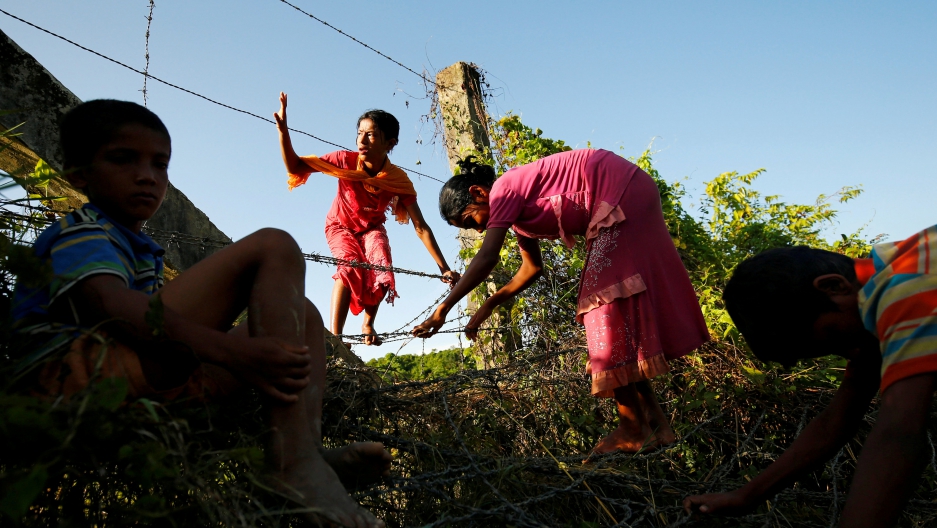 Rohingya children cross the Bangladesh-Myanmar border fence as they try to enter Bangladesh in Bandarban, an area under Cox's Bazar authority, Bangladesh, August 29, 2017.

At least 18,500 Rohingya have crossed into Bangladesh since fighting erupted in Myanmar's neighbouring Rakhine state six days ago, the International Organization for Migration said Wednesday.

Plumes of smoke billowed from several burning villages in the worst-hit section of the state, according to an AFP reporter on a government-led trip to the area, as the violence showed little sign of abating despite security sweeps by Myanmar's police and troops.

The streets of Maungdaw — northern Rakhine's largest town — were virtually deserted as fires flickered among charred remains of houses and occasional burst of gunfire echoed in the distance.

The clashes began on Friday when militants from Myanmar's Rohingya Muslim minority community staged deadly attacks on police posts, prompting raids on the community and searches by troops and police.

Related: This Muslim purge in Myanmar is so awful you can see it from space

At least 110 people, including 11 state officials, have been confirmed dead since then and thousands of Rohingya have poured across the border to Bangladesh despite Dhaka's attempts to stop them.

"As of last night, 18,500 people have come across," Chris Lom, the IOM's Asia-Pacific spokesman, told AFP, adding an unknown number were still stuck on the Myanmar side of the border.

At least 6,000 Rohingya civilians fleeing renewed violence in Myanmar are stranded on border as Bangladesh blocks their entry pic.twitter.com/KkTQEtWf4w

An estimated 6,000 Rohingya on Tuesday massed at the "zero line" border with Bangladesh, days after the area came under mortar and machine gun fire by Myanmar security forces.

The Rohingya, the world's largest stateless minority and subject to severe restrictions on their movements, are barred from officially crossing.

Bangladeshi authorities on Wednesday toughened patrols in a bid to prevent more arrivals in a country that already hosts an estimated 400,000 Rohingya, albeit in abject conditions.

Rohingya have sneaked across the land border in large number or swum the Naf River which marks part of the frontier.

But tragedy befell some of them. The bodies of two Rohingya women and two children washed up on Bangladeshi soil on Wednesday, an official there told AFP, drowned after their rickety boat capsized.

Scores more were found alive on the remote Bangladeshi island of St Martin's, according to coastguards there, after taking a risky passage on barely seaworthy vessels.

Khadija Begum, a Rohingya woman from Rathedaung, was detained on arrival by Bangladeshi officials.

"We thought it would be easier to face the sea than the (Myanmar) army," she told AFP in tears.

Ethnic Rakhine Buddhists and other tribal groups are also among the dead and displaced after allegedly being targeted by Rohingya militants.

With information trickling out, a picture has emerged of a cat-and-mouse game between militants and security forces played out in remote hamlets, fields and forest hideouts.

Myanmar classes the militants as "Bengali terrorists" and accuses them of setting fire both to Rohingya homes and those of other communities.

Rohingya arriving in Bangladesh have told a different story, saying their homes had been set on fire by police, troops and Buddhist mobs.

A Rohingya villager near the town of Maungdaw, speaking on condition of anonymity, said residents fled his hamlet as security forces approached and torched their homes.

"Villagers are running away ... where do we have to live now?" the villager said.

It was not immediately possible to verify his account.

Rakhine has been beset by religious violence since 2012 but analysts say the emergence of organised militancy is a game-changer.

Displaced Rohingya reaching Bangladesh have told AFP some men are heeding a call to arms by the militants and staying behind to fight in their villages.

Also: Myanmar’s newest insurgent group is a nightmare for Muslims

After years in which the Rohingya largely avoided violence, the group emerged last October to carry out deadly attacks on police posts.

That prompted a months-long security crackdown by Myanmar's army which left scores dead and forced 87,000 people to flee to Bangladesh.

The Pope and the UN are among those urging Myanmar to protect Rohingya civilians from the latest violence.

With pressure mounting, a Myanmar government official on Tuesday said security forces would use "maximum restraint" in coming days but insisted on the country's right to defend itself from "terrorists."