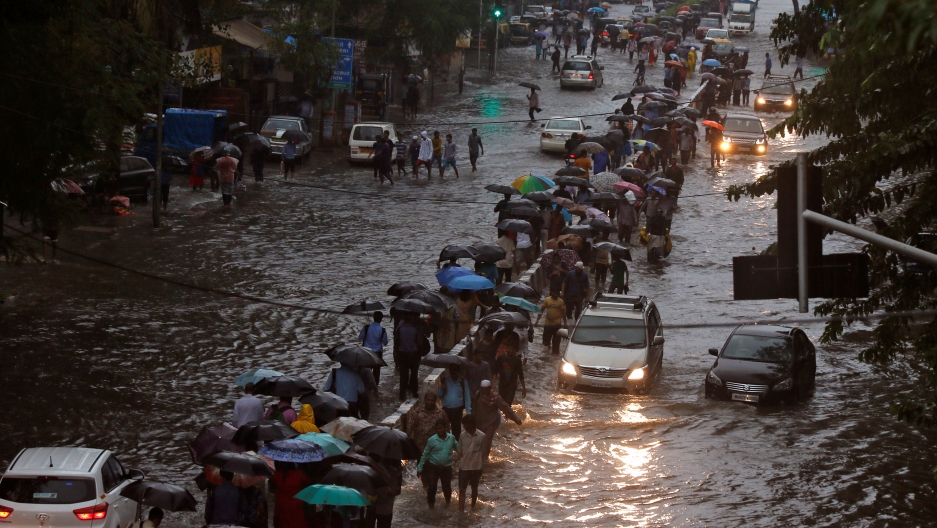 Commuters walk through water-logged roads after rains in Mumbai.

Mumbai, a coastal city of more than 20 million people, is the latest to be hit by floods that have ravaged South Asia this monsoon season, affecting millions of people across India, Nepal and Bangladesh and killing more than 1,200 people.

The intense rainfall began Tuesday morning and continued for several hours, making roads impassable and briefly shutting the suburban rail network on which millions of commuters depend.

Cars were submerged and commuters waded through waist-deep water on Tuesday evening. "I could not find any mode of transport and spent my night on the streets instead of trying to reach home," said 62-year-old Gangadin Gupta. 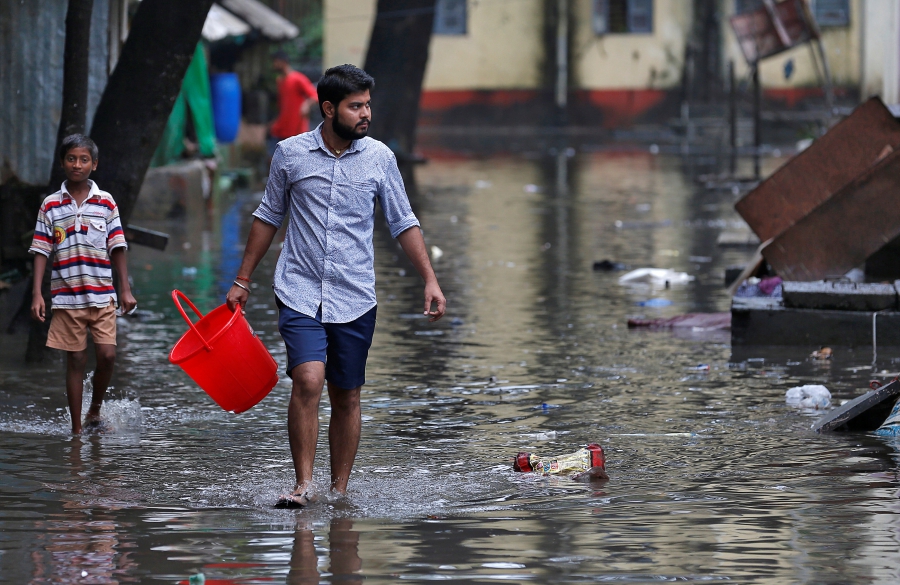 A man carrying a bucket walks through a water-logged neighbourhood in Mumbai.

Mumbai has one of the highest population densities in the world, says BBC Mumbai reporter Sameer Hashmi. “That puts pressure on not just roads and railways, but even on the sewage system and drainage system.”

The lack of infrastructure in parts of Mumbai, particularly slums, only compounds the problem, said Hashmi.

Residents of Dharavi, one of Asia's biggest slums and home to more than a million people, said much of the low-lying area was under water.

"Most of the shanties and houses in Dharavi were submerged in water and we lost all our valuables," said 45-year-old Selvam Sathya. "All of us took refuge on the first floor of different buildings and the water only started receding this morning. I lost all my belongings in the flooding." 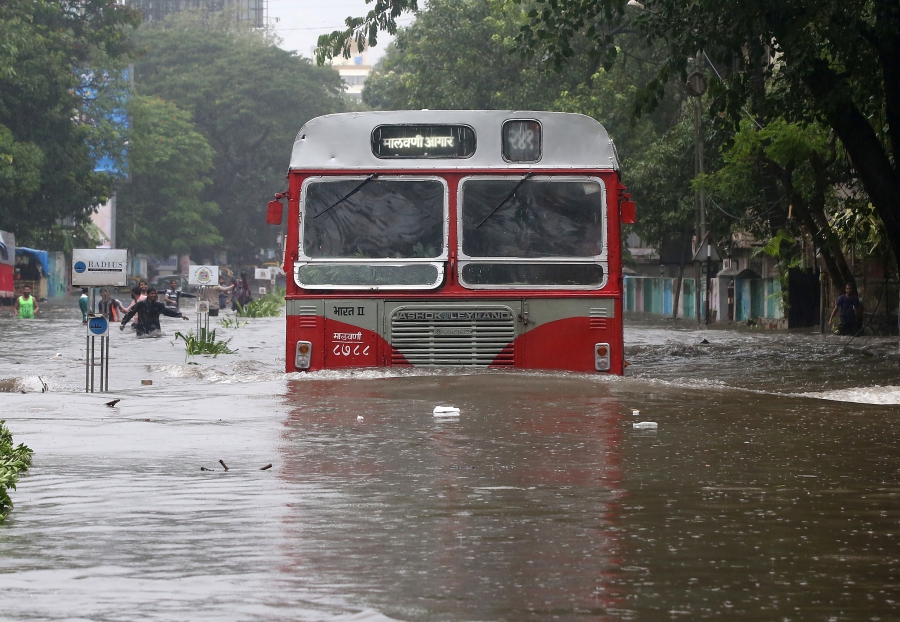 A passenger bus moves through a water-logged road during rains in Mumbai.

The transport chaos forced the city's famed dabbawallahs, who take hundreds of thousands of hot lunches from commuters' homes to offices every day, to cancel their deliveries. More than 5,000 were left stranded in the city overnight, according to a spokesman for the Mumbai Dabbawallha Association.

The flooding brought back memories of 2005 when about 37 inches of rain fell on Mumbai in just 24 hours, killing more than 1,000 people.

Electricity, water supply, communications networks and public transport were totally shut down during the 2005 catastrophe, which was blamed on unplanned development and poor drainage in the western city.

India, Nepal and Bangladesh all suffer frequent flooding during the monsoon rains, which begin in June and last till September or October. 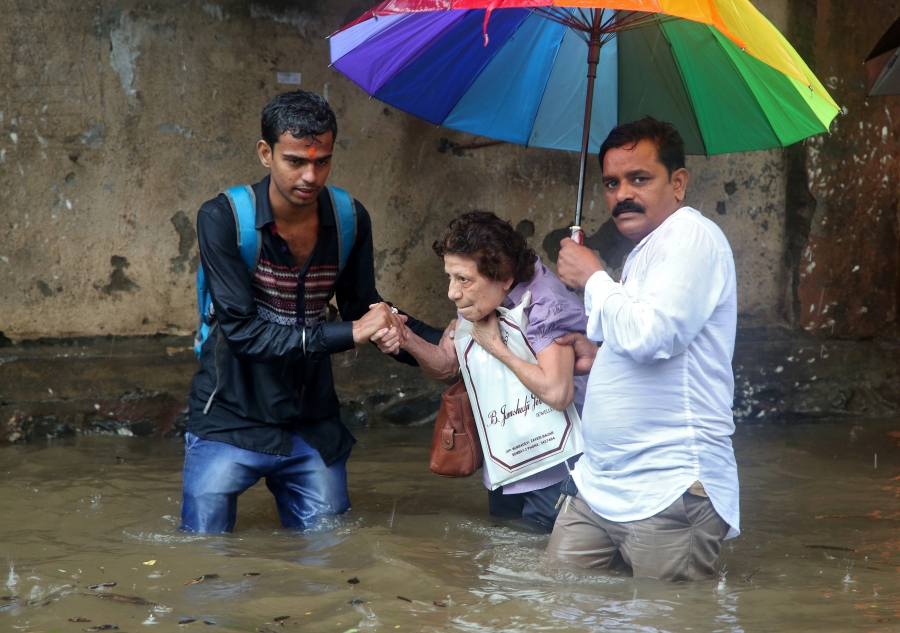 A woman is helped to move through a water-logged road after rains in Mumbai.

But the Red Cross has termed this year's floods the worst for decades in some parts of the region. It says entire communities have been cut off and many are short of food and clean water.

The east Indian state of Bihar has been particularly hard hit, with more than 500 people killed this monsoon season.

Around 1.7 million people were reportedly affected by the floods, which are now receding.

Back in Mumbai, the roads are now clear. Despite a chance of more rain, schools and businesses are reopening tomorrow and public transportation will return to the regular schedule.

Agence France-Presse​ contributed to this report. 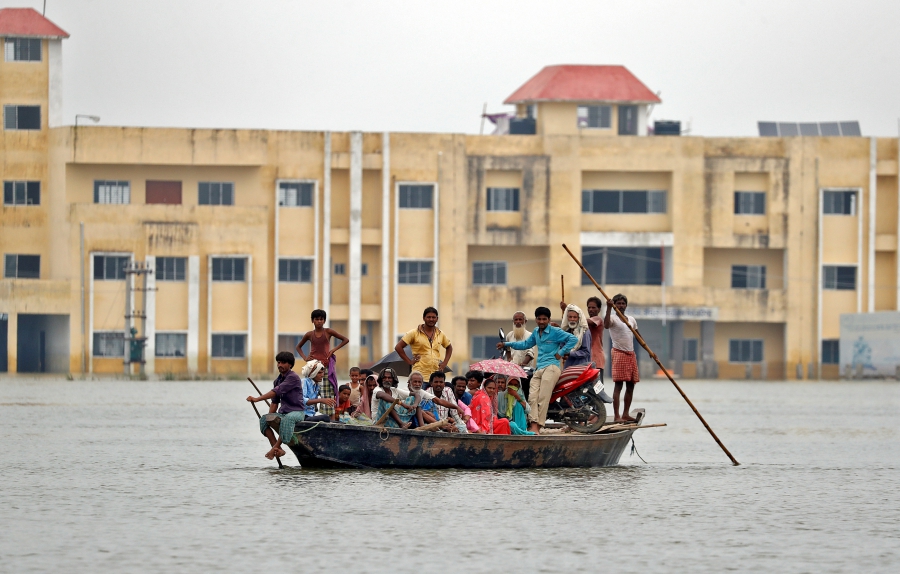 People are rescued from a flooded village in Motihari, Bihar state.