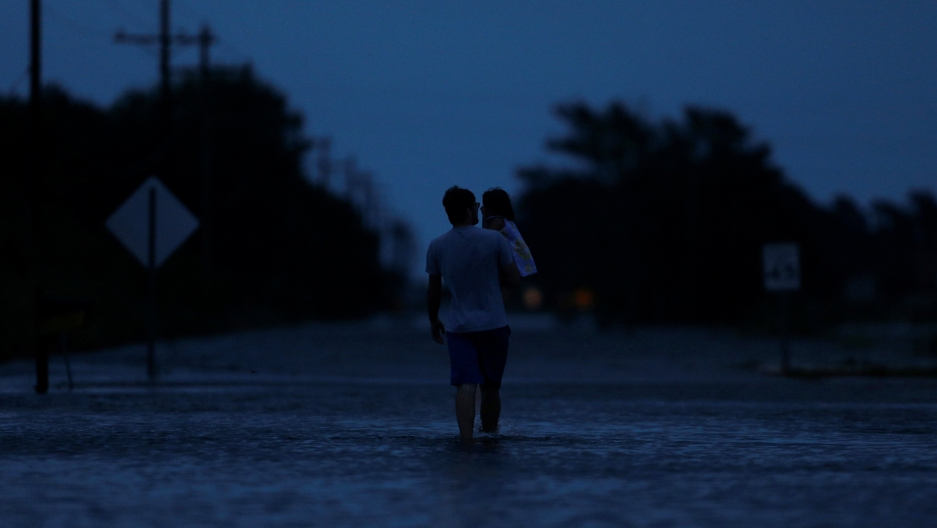 Ethan holds his 2-year-old daughter Zella as they walk through flood waters from Tropical Storm Harvey in Calcasieu Parish, Louisiana, on August 29, 2017.

Tropical Storm Harvey made a second landfall in Louisiana Wednesday five days after the monster storm slammed onshore as a Category Four hurricane, pummeling the US Gulf coast with torrential rains that turned neighborhoods into lakes in America's fourth largest city, Houston.

The storm's second landfall was just west of the town of Cameron, the National Hurricane Center said, with "flooding rains" drenching parts of southeastern Texas and neighboring southwestern Louisiana.

Louisiana residents braced for Harvey's ferocious maximum sustained winds nearing 45 miles per hour, with forecasters predicting another five to 10 inches of rain could pour on the region.

Related — How to help after Harvey: These groups are providing relief to Texans affected by catastrophic flooding

They expect Harvey will gradually weaken to a tropical depression by Wednesday night, meaning maximum sustained winds should slow.

But low-lying New Orleans was still girding for the storm, just a day after the 12-year anniversary of Katrina, which ravaged the vulnerable city famous for its jazz music and cuisine.

The New Orleans branch of the National Weather Service said a heavy rain threat remained over southeast Louisiana and southern Mississippi through Thursday, when relatively drier weather is finally slated to arrive.

One night prior to the second landfall, New Orleans Mayor Mitch Landrieu tweeted to "remind #NOLA that we are not yet in the clear," urging residents to "remain vigilant and cautious." 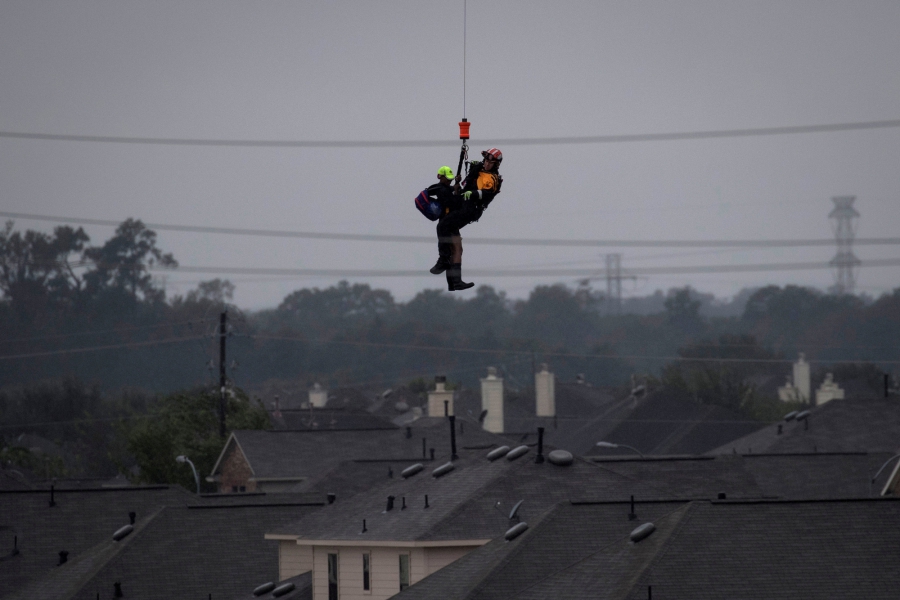 A military helicopter and personnel rescue a stranded resident from floods caused by Tropical Storm Harvey in east Houston.

In Texas emergency crews were still struggling to reach hundreds of stranded people in a massive round-the-clock rescue operation — but the National Weather Service tweeted that weather conditions there were to at last improve.

The storm had transformed roads into rivers in America's fourth-largest city, driving more than 8,000 people into emergency shelters.

Houstonians woke up Wednesday from a nighttime curfew declared by Mayor Sylvester Turner aimed at aiding search efforts and thwarting potential looting in the flood-ravaged city.

At least one bridge had crumbled, one levee had breached and dams were at risk in the Lone Star State.

The full scale of the catastrophe's impact — including the number of deaths and the extent of destruction — remained difficult for authorities to gauge, as rescue efforts were ongoing and much of the city remained flood-stricken.

Media reports indicated the death toll has risen to 30, and authorities feared confirming more once the worst had past and search teams could again travel roads.

A Houston police officer was confirmed the latest victim of the storm after the body of Steve Perez, who went missing after reporting for duty in the early hours of Sunday, was recovered by divers two days later.

Harvey was previously known to have left at least three people dead, with six more fatalities potentially tied to the storm.

Everywhere, the figures from the storm are staggering. The National Weather Service said over six million Texans have been impacted by 30 inches or more of rain since Friday.

Residents living around a chemical plant in the county that includes Houston were evacuated as a precaution, over fears that some of the chemicals at the facility — which produces organic peroxides — might react or cause an explosion.

Andrea Aviles, 16, fled her home along with her family on Tuesday. She and some 30 extended family members were now crammed into a hotel in the small town of Winnie.

"I've never seen it like this," she said of the flooding. "All our yard is full of water."

Hugging the road's central median in their Suburban vehicle — water reaching halfway up the tires — they passed ditches full of abandoned cars.

President Donald Trump toured the Harvey disaster zone in Texas on Tuesday as he sought to project an image of leadership in America's first major natural disaster since he took office.

On Air Force One bringing Trump back to Washington, White House spokeswoman Sarah Huckabee Sanders said the president will return to Texas Saturday and perhaps go to Louisiana, too, depending on the weather there.

But the president was nevertheless seeking to make a political statement, learning from the mistakes of former Republican president, George W. Bush, whose response to Hurricane Katrina was widely seen as botched.

The National Weather Service tweeted Harvey appears to have broken a US record for most rain from a single tropical cyclone, with nearly 52 inches recorded in the town of Cedar Bayou.

The Texas bayou and coastal prairie rapidly flooded after Harvey struck the coast on Friday, but the region's sprawling cities where drainage is slower were worst hit.

Highways were swamped and homes were rendered uninhabitable, with power lines cut and dams overflowing, sparking massive floods across Houston and its wider metropolitan area of six million.

Federal officials estimate up to half a million people in Texas will ultimately require some form of assistance — but for now the focus remains immediate disaster relief, with many lives still at stake.

"Recovery is a slow process," Brock Long, the head of the Federal Emergency Management Agency, said as he welcomed Trump in Corpus Christi along with Texas Governor Greg Abbott.