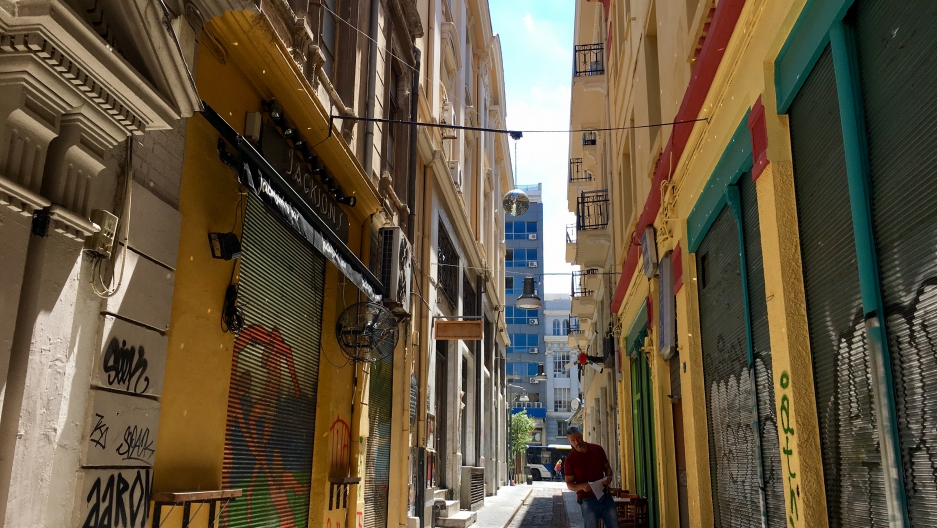 The Greek city of Thessaloniki has long struggled to embrace its Jewish history. But that's beginning to change under the city's current mayor.

Walking through the bustling center of Thessaloniki, Greece, Hella Kounio Matalon points off to the distance.

“Most of the properties that we see on this road are former Jewish properties,” she said as she walked around Thessaloniki on a recent morning, recounting the city's Jewish history.

Matalon knows that history well, partly because of her personal connection to it. During her grandparents' lifetime, the city was known as the "Jerusalem of the Balkans." And her father was among tens of thousands of Thessaloniki's Jews to be taken to Nazi concentration camps.

Despite the immense influence the Jewish community had on the city, and the mass persecution it faced during World War II, Thessaloniki had done very little to embrace and memorialize its past. It wasn't until recently, under the leadership of a progressive mayor, that the city began embracing its past.

“Before Mayor Boutaris, nobody knew about the Jews of Thessaloniki,” said Matalon. “This is a Greek city. But it’s a lucky city to be a multicultural city. It was influenced by so many people and we should be proud of it and not hiding it.”

The wave of change comes at an unlikely time, coinciding with the rise of Greece's neo-Nazi Golden Dawn party — currently the third largest party in the Greek parliament. As a Holocaust survivor, Matalon's father is extremely concerned about Golden Dawn.

“Every time we speak about it, he compares it with the Nazi Germany because, there also, the extreme right party did not spread [immediately] before the Holocaust. … They started everything 10 years before and nobody believed that something bad would happen.”

Although Thessaloniki’s Jewish presence dates back to its founding in 315 B.C., the arrival of 20,000 Jews from Spain (including Matalon's ancestors) posed a turning point for the city

Over the centuries that followed, the Jewish community was involved in all aspects of social and economic life in the city, and turned Thessaloniki into a thriving commercial center.

“They participated in every social and economic strata of the city,” said Devin E. Naar, professor of history and Sephardic studies at the University of Washington, and author of "Jewish Salonica: Between the Ottoman Empire and Modern Greece." “Not only were there some merchants and shopkeepers, rabbis and teachers, journalists and lawyers, but also many more tobacco workers, stevedores, people selling Halva on the street, shining shoes — a very wide-spanning socio-demographic profile.”

But a series of events devastated Thessaloniki’s Jewish community during the 20th century. The era of multicultural coexistence that had persisted for centuries under Ottoman rule came to a halt when the Greek Army took control of the city in 1912. The process of perpetuating a Greek (and therefore Orthodox Christian) identity left little room for the city’s Jewish community.

Then in 1917, a massive fire tore through the city, causing mass destruction and leaving more than 70,000 of the city’s residents homeless.

Some 96 percent of Thessaloniki’s Jewish population — about 50,000 people — were killed during the Holocaust.

Matalon’s father, then a teenager, was among the few who survived and returned to the city. His story is told at the Jewish Museum of Thessaloniki — an institution that, until recently, was among very few reminders of Thessaloniki’s Jewish past.

Inside the museum, Matalon walked upstairs, where a section of the museum is dedicated to the Holocaust. 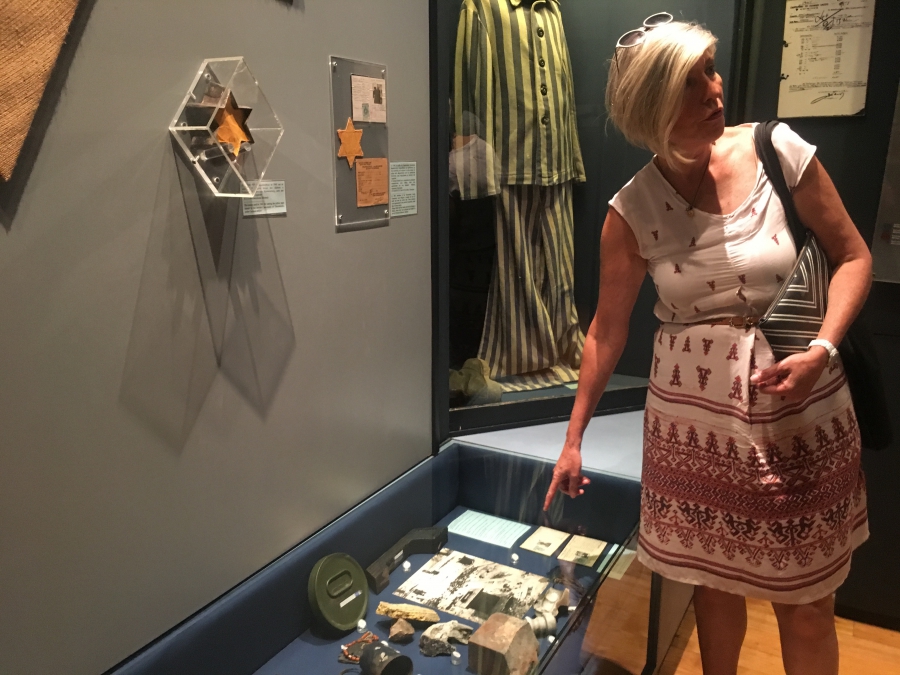 Inside the Jewish Museum of Thessaloniki, Hella Kounio Matalon points to items collected by her father from Auschwitz, after he was liberated. He was among very few of Thessaloniki's Jews to survive the Holocaust.

Displayed behind the glass are various items: a cup, scissors, a notebook.

“These things were collected by my own father in 1960 when he revisited Auschwitz, after he was liberated from there,” she said, pointing to the blue cup behind the display. “This cup here, as described to me by my father, was the most precious thing that he possessed. If you lose your cup you don’t eat..”

When Matalon’s father returned to Thessaloniki, he found a city unwilling to confront the horrors faced by its Jewish community — the same community that helped lead the city to prosperity.

Confronting the Holocaust would mean "the city and country would have to confront, in a direct way, the collaboration and complicity of not only some Greek Orthodox Christians, but also state institutions — the university, the church, the municipality — in the Holocaust,” Naar said.

Not only was the city unwilling to confront this reality, it utilized the physical destruction of Jewish and other institutions to advance its nation-building narrative.

“The cityscape was completely obliterated and transformed as a result of the fire of 1917 and the destruction of World War II. In both instances, the Greek state utilized those catastrophes to Hellenize the city and to remove the imprint of Jews and Muslims in the process,” Naar said.

That reality was particularly painful for the Jews of Thessaloniki.

“The Jews of Thessaloniki felt ... Greek. Very different from the Jews of Europe, who didn’t have a national feeling,” Matalon said.

For decades, the city remained silent. It wasn’t until the 1980s that the city erected a monument to honor the 50,000 Jews of Thessaloniki killed during the Holocaust. 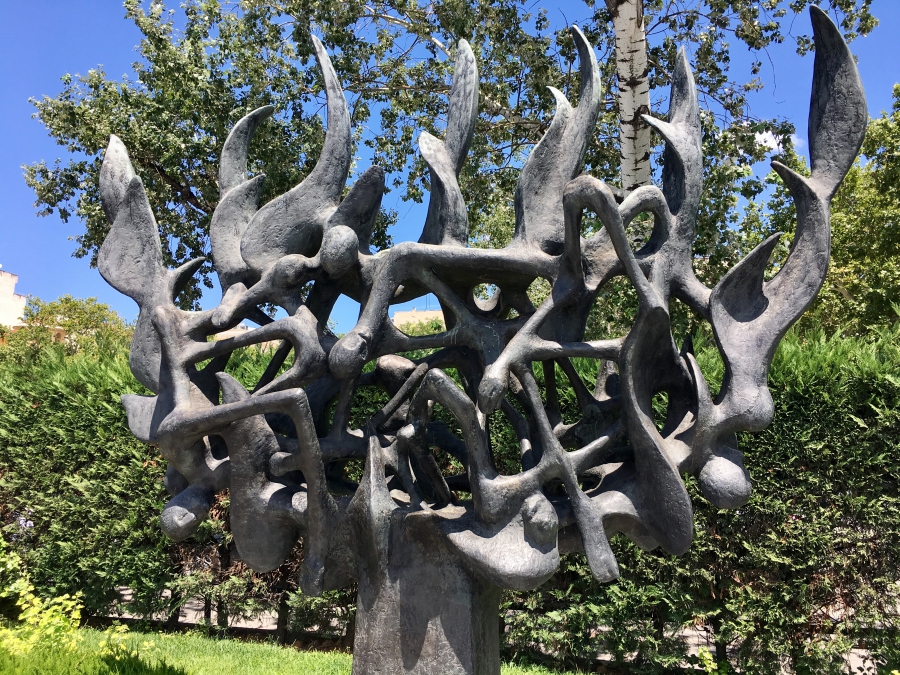 A monument to commemorate the 50,000 Jews murdered during the Holocaust was placed in Thessaloniki's Freedom Plaza in 1997.

As she walked to the monument, Matalon said that in the decades following the Holocaust, the city engaged in "memocide — not only killing generations, but also killing their memory.” But Matalon, and other members of Thessaloniki's small but vibrant Jewish community of about 1,000 people say the city has taken a new approach in recent years, under the leadership of Mayor Ioannis Boutaris.

Since being elected to office in 2010, Boutaris' approach to politics has been anything but typical.

The 75-year-old comes from a business background, but never wears a tie. He has tattoos and a diamond stud in his left ear.

Embracing Thessaloniki’s Jewish and multi-cultural past and the fate of the Jews of Thessaloniki was one of his goals when he came into office in 2010.

“When I became mayor I said one specific thing: You can’t build your future if you don’t know your past,” Boutaris said.

The Mayor is apprehensive about that future, particularly with the rise of the Golden Dawn party, an ultranationalist, far-right party that won 7 percent of the vote during the 2015 general elections in Greece and holds 17 seats in the Greek parliament.

Under Boutaris’ leadership, the city has taken various steps to memorialize the Holocaust — a history the mayor does not want to see repeated.

In 2014, the city erected a monument at Thessaloniki’s Aristotle University. The institution was built on top of the ruins of the city’s historic Jewish cemetery, which was dismantled under Nazi occupation.

Boutaris is also backing construction of a six-story Holocaust Museum, expected to be completed by 2019. He says the institution will be the only Holocaust museum built right by the rail tracks where Jews were forced onto trains heading to concentration camps. Boutaris has also established an annual march through the city to honor the 50,000 killed during the Holocaust.

During his second swearing-in, in 2014, he wore a Star of David badge on his jacket, reportedly in protest against the election of a Golden Dawn member of parliament. His decision was hailed by members of the Jewish community, who interpreted the gesture as a show of solidarity with the Jewish community.

By highlighting the history of the Jewish community in the city, the mayor hopes to eradicate a still-existing notion that Jews are not Greek.

“The Jews of Thessaloniki are more patriots than us,” the mayor said. “What’s important is that the truth about the presence of the Jewish community in the city must be restored. And there I won’t step back.”

Boutaris says he was motivated to pursue these issues partly for personal reasons; growing up, he says many of his family friends were Jewish. But as a businessman, he also believes opening Thessaloniki to its own history will have benefits beyond the city and even the country — in the form of tourism.

"It elevates Thessaloniki to a new level," he said.

So far, the approach seems to be working. Tourism from France, Israel and the United States has increased since Boutaris came into office. Rabbi Kaplan hosts weekly Shabbat services at the Astoria Hotel in Thessaloniki and attributes these changes, partly, to Boutaris.

"We've already had more people [attend] Shabbat services than we did the whole summer," he said at the end of July. "It could be because the city is more welcoming ... because of the mayor, and because of the great Jewish history ... which is being more and more revealed."

But the mayor and his efforts have received pushback.

Among other initiatives, the mayor has been promoting public school visits to the existing Jewish Museum of Thessaloniki.

In 2014, about 700 students visited the museum annually; today that figure has soared to more than 7,000, according to museum director Erika Perahia Zemour, a development not welcomed by all educators and parents.

Erika Perahia Zemour is the director of Thessaloniki's Jewish Museum. She says since the mayor took office, public school visits to the museum have more than tripled.

“We have teachers who have told us that they have problems with the parents of kids they bring to the museum,” Zemour said. “Yesterday, for example, I had a teacher from ... an area of Thessaloniki that votes 15 percent Golden Dawn, and one of the parents told him ‘Why are you teaching the kids these things? The Holocaust doesn’t exist. It never happened.’”

The mayor credits much of that push-back to anti-Semitism. According to a 2014 survey by the Anti-Defamation League, Greece is the most anti-Semitic country in Europe.

But those within the Jewish community say the mayor’s efforts are making a difference.

“Certainly things have changed since the mayor changed. Minds have been opened and the mayor has done a lot of work so that people can realize the history of the city," Zemour said. “Finally something is happening. We are making some progress."