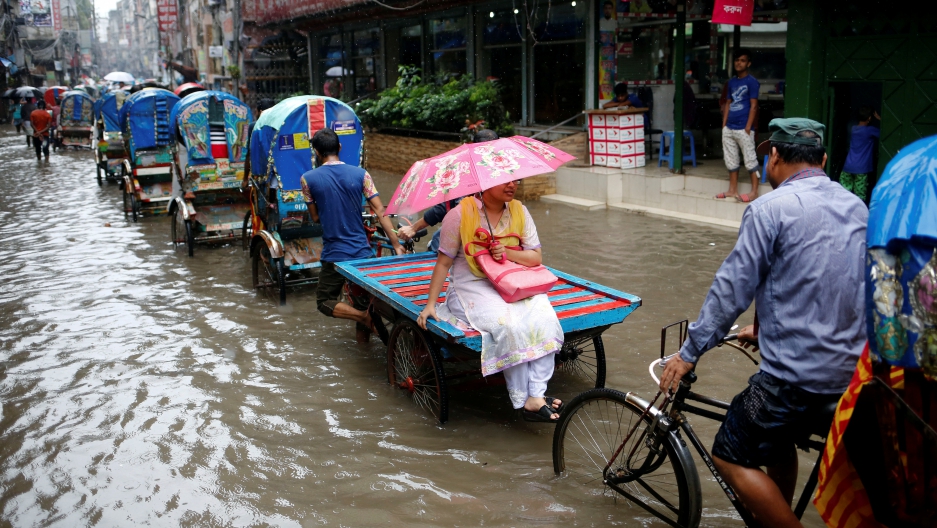 Commuters ride on rickshaws as streets are flooded due to heavy monsoon rains in Dhaka.

More than 1,200 people have been killed by flooding and landslides in northern India, Nepal and Bangladesh as intense rainfall has slammed the region for weeks.

Tens of thousands of homes, schools and hospitals have been destroyed by the monsoon rains, and the United Nations estimates that almost 41 million people have been affected in the three countries.

Matthew Marek, the head of disaster response in Bangladesh for the International Federation of Red Cross and Red Crescent Societies, says about half of the country’s 64 districts are flooded, but the water is finally starting to recede in some areas.

“Right now the focus is not on rescue,” Marek says. “The focus is on actually delivering aid — food, clean drinking water, as well as assistance in the form of hygiene items, et cetera.”

Marek says the Red Cross in Bangladesh has requested about $4.9 million from the international community to continue their immediate relief efforts.

The Bangladeshi government hasn’t released official estimates about the amount of damage caused by flooding, so it’s difficult to say how much it may cost to rebuild.

Farmland in Bangladesh has been particularly devastated. It’s a huge blow to the agriculture-dependent country, which already lost around 700,000 metric tons of rice in flash floods earlier this year.

You can listen to disaster response manager Matthew Marek’s full conversation with The World above.