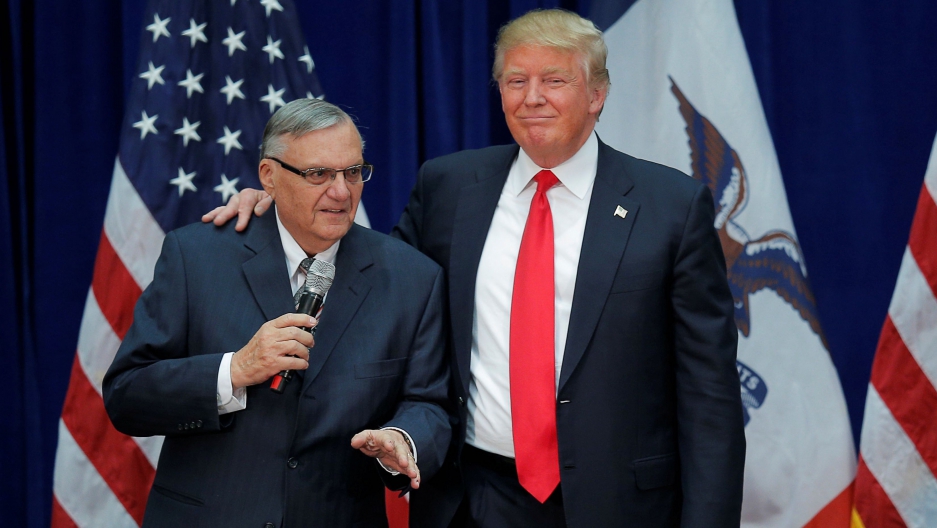 Arpaio, once dubbed America’s toughest sheriff, is infamous for his targeted undocumented immigration sweeps and harsh treatment of detainees, some of whom were housed in the sweltering outdoor Tent City that Arpaio erected in response to overcrowding in his county jails. He’s faced lawsuits for violating detainee rights, and civil rights actions from the government for racial profiling.

But the former sheriff has a fan in the White House. President Donald Trump had been hinting at clemency for Arpaio for over a week, and on Friday, the White House officially announced his pardon.

It’s a big reward for a big ally. Sheriff Joe, as he’s known to his fans, touted the false claim that Trump pushed for years before running for president — that Barack Obama was not born in the United States and therefore wasn’t a legitimate president.

Criticism of the pardon came swiftly from liberals and conservatives alike. Arizona Republican Sen. John McCain said the pardon “undermines [the president’s] claim for the respect of rule of law,” and a spokesman for House Speaker Paul Ryan told the press that the representative “does not agree” with Trump’s decision.

“The president’s pardon of Joe Arpaio spoke directly in support of white supremacists, who supported both Arpaio’s policies, which the courts struck down as unconstitutional, and Trump’s campaign positions, which he’s now implementing as federal policy around the country,” says Cecillia Wang, deputy legal director for the American Civil Liberties Union. The ACLU has sued Arpaio for civil rights violations.

January Contreras served as an assistant attorney general in Arizona, and is currently running for attorney general in the state. She says Arpaio was running “systematic operations” that have violated the US Constitution, adding that the president’s pardon sets a very “dangerous precedent.”

“When our system refuses to hold the powerful accountable the way they do everybody else, that’s a real failure,” she says. “As a former county and state prosecutor, I’ve never seen that at play in the way that we’re seeing it now. The integrity of the justice system relies on everyone being held accountable to the same rules.”

But Arpaio disagrees with his many critics.

“This is made up by the activists; it's made up by politicians, that I've been guilty of racial profiling — it's not true,” he told public radio station KJZZ on Sunday. “I'm becoming a little disturbed [with how] across our nation, how people are saying I was indicted and charged with racial profiling — I was charged on a misdemeanor, allegedly for not obeying a ruling from a judge.”

Contreras says that the former sheriff is practicing some “revisionist history.”

“It’s correct that he was ultimately convicted of criminal contempt, but he was convicted of that because he refused to follow a judge’s order to stop racially profiling our citizens here in Arizona,” she says. “You can’t divorce those two things. ... Joe Arpaio was told by a judge to stop directing the sheriff’s office to conduct racial profiling, and he refused to stop doing that. That’s a violation of our Constitution; that’s a violation of the rights of our residents here in Arizona.”

Arpaio was voted out of office last year. Contreras says the community in Maricopa County grew weary of his policies, especially after a Department of Justice investigation revealed that Latinos were illegally arrested by Arpaio’s department, abused in county jails and that the department failed to investigate sexual assault cases involving Latinos. The Maricopa County Sheriff’s Office also misspent nearly $100 million in funding.

“The voters showed that they were willing to keep Joe Arpaio in office, and they listened to this mantra of the toughest sheriff in America, and they weren’t paying so much attention to the fact that this guy had forgotten to do his job along the way,” she says. “As those follies, as those failures started to come to light, and how much money Joe Arpaio was costing taxpayers because of his failures to do his job, that’s when voters started to think, ‘Gee, enough of the circus.’”