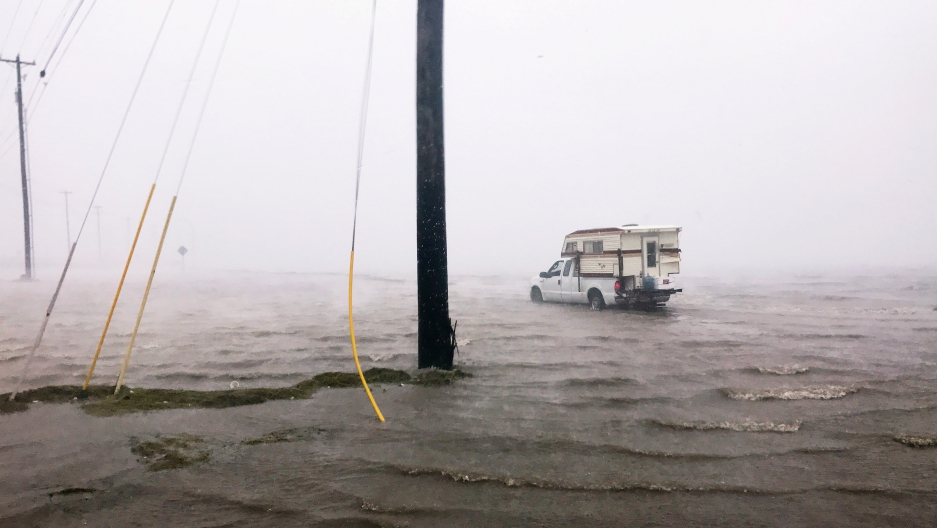 Powerful wind and heavy rain from Hurricane Harvey lashed the Gulf Coast of Texas on Saturday, uprooting trees, tearing off roofs and forcing tens of thousands of residents to flee.

Harvey, the most powerful storm to hit the US mainland in 12 years, roared ashore late Friday at the town of Rockport — near Corpus Christi, a major US oil industry hub — as a Category Four hurricane on the five-level storm scale, packing sustained winds of 130 miles per hour (215 kilometers per hour).

A few hours later the storm made a second landfall just north of Rockport as a Category Three hurricane, with winds of 125 mph, the National Hurricane Center said.

Over the next hours Harvey lost strength as it moved inland over south Texas and eventually dropped to a still-dangerous Category One storm, with winds of 85 mph.

"Additional weakening is forecast, and Harvey is likely to become a tropical storm later today," the NHC said at 1200 GMT.

More damage however is expected from the heavy rain than from the strong wind: the NHC warned of likely "catastrophic and life-threatening flooding" due to the massive rainfall forecast and the huge storm surge, which could reach 13 feet in some places.

"Harvey is expected to slow down through the day and meander over southeastern Texas through the middle of next week," the NHC said.

President Donald Trump granted Texas Governor Greg Abbot's request to declare a "major disaster" zone in the state to speed federal aid to the millions in harm's way. Abbot in turn activated more than 1,000 National Guardsmen to help with evacuation and recovery.

Meteorologists warned that tornadoes were possible through Saturday from Texas into Louisiana, which is also expected to take a major hit.

The powerful storm has forced hundreds of thousands to flee their homes and crippled oil production in the Gulf.

There was widespread tree damage in Rockport and vehicles damaged "all over the place," as well as 10 people injured from roof collapses, City Manager Kevin Carruth told the Corpus Christi Caller-Times.

As he headed to the Camp David presidential retreat for the weekend with his family, Trump said: "Good luck to everybody."

Harvey, the most powerful hurricane to hit the mainland since Wilma struck Florida in 2005, could dump up to 40 inches of rain on the area over the next few days — and cause billions of dollars in damage.

2005 was a huge year for hurricanes — before Wilma, Hurricane Katrina pummeled New Orleans, leaving more than 1,800 dead and becoming one of the greatest domestic headaches for then-president George W. Bush.

Coastal Texas is a fast-growing area, with some 1.5 million people moving into the area since 1999.

Authorities said the combination of dense growth and perhaps a year's worth of rain falling in just four or five days could prove deadly.

Supermarket aisles were stripped bare, homes and shops had boarded up windows.

The NHC warned of the "complete destruction of mobile homes," of many buildings "washing away," and some areas being left "uninhabitable for weeks or months."

Some 213,000 customers in the storm region were left in the dark after Harvey struck, the local utility company, Ercot, said Saturday.

"Much road debris and downed power lines," Corpus Christi police said via Twitter. "Most traffic lights are out. Please be patient."

Wary of any accusation of complacency, Trump said he was closely monitoring the storm's progress and urged people to "Be Safe!" in a series of Tweets.

Many residents who fled the worst-affected areas headed for the city of San Antonio where temporary shelters were run by the fire department.

"I felt like I didn't want what happened to the guys in New Orleans...I didn't want that to happen to me," Michael Allen, an evacuee from Corpus Christi, told AFP.

"I only got what you see me with. Everything I had, I had to leave. Everything. It was bring it with me or lose my life and I felt like I should save my life."

Sheriff Frank Osborne of Matagorda County, where evacuations were mandatory, told local TV station KHOU that he would not risk the lives of his deputies "to save somebody that didn't leave when they were asked to."

Officials in Houston, the most populous city in the storm's path, closed its port but did not anticipate mass evacuations.

FEMA's Long said the most pressing danger was the storm surge, but also said many inland counties should prepare for "significant" flooding.

US authorities said about 22 percent of crude production in the Gulf of Mexico was shut down as of Friday — accounting for more than 375,000 barrels a day.

But total US production stands at 9.5 million barrels a day, experts say.

Meteorologist Eric Holthaus told AFP the prospect of the storm stalling on the coast, lashing it with heavy rain for days, was "just terrifying."

In Louisiana, Governor John Bel Edwards issued an emergency declaration for his entire state, as authorities in New Orleans — where Katrina did the most damage — readied high-water rescue vehicles and boats.