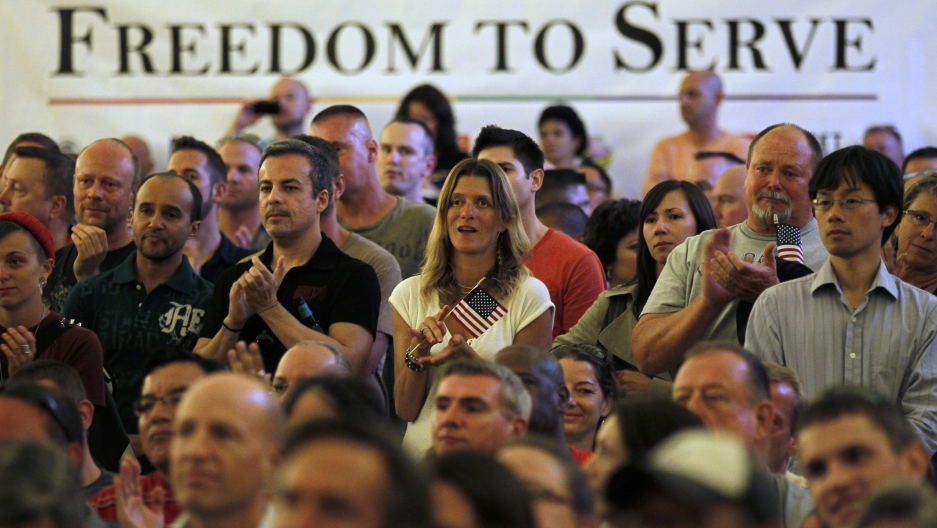 Members of San Diego's LGBT community gather to celebrate the expiration of the US military policy, "Don't Ask Don't Tell," on Sept. 20. 2011.

Transgender troops and veterans of the US military are confused and angry.

Weeks after President Donald Trump tweeted about a new policy banning transgender service, details of the changes have been scarce.

Now, the White House has reportedly come up with 2 1/2 pages of guidelines that give the Pentagon some leeway in implementing the transgender ban. Still, ambiguity remains.

"Does that mean that the secretary of defense is going to have to certify that each and every transgender service member is deployable at any given moment?" asks Brynn Tannehill, a transgender Navy veteran. "The White House is foisting the burden of deciding what to do onto the Department of Defense with a clear bias in mind. What's more is, we have transgender people serving right now in the field, in war zones, on ships. Being transgender in [the] long run does not affect one's ability to deploy."

Tannehill left the Naval Reserve in 2010 to make the transition to a woman. She's now advocacy director for Sparta, an organization for LGBT service members.

Estimates of the numbers of transgender troops vary. A Pentagon-commissioned study by the Rand Corp. put the tally of serving transgender troops at somewhere between 1,320 and 6,600. Another study, this one by UCLA's Williams Institute came up with a much higher estimate — 15,000 to 15,500 transgender troops. That total includes active duty soldiers, as well as National Guard and reserves.

Tannehill has long wrestled with wanting to serve in the military and be true to her identity. She says she wanted to be a pilot since she was a child.

"I grew up near Luke Air Force Base, and my mom was a teacher near the base. And as a kid, I would go with her to school early in the mornings and watch the teams doing training and it was just amazing," she recalls. "From that moment on, I knew I wanted to be a pilot and nothing else. And I pursued that dream relentlessly through college and high school and then through flight school, and eventually, I did.

"I ended up being a Naval aviator; but at the same time, as I figured out what my gender identity was from 13 onward, so I knew that was something I would have to hide. And even as the days of 'Don't Ask Don't Tell' wound down, transgender people were not going to be affected by the repeal. And that's why, in order to transition, I had to leave the reserves and give up my career. And that's been one of the hardest things I ever had to do."

Tannehill recalls a moment during her days at the Naval Academy when she had to decide whether to sign on to a Navy job that wouldn't permit her to be open about her true gender identity.

"I stood there thinking, 'I have to commit to another two years at the Naval Academy and another five years of active duty service. But I know I'm trans. Which one is more important to me?' And I chose serving my country and being a Naval aviator, because being trans is hard, and because I had worked so long and so hard to achieve this dream."

"The [blowback] did start coming out after I was married, after I had kids, after I had a career. It was tearing me apart, tearing my family apart, that I was unable to talk to anyone or get help or to work through this or get medical care," she says.

And that trauma, she notes, can easily be prevented.

"Long after this policy either comes or goes or happens or doesn't happen, there will be transgender people in the military," Tannehill notes. "We have to make a choice whether we are going to put them in a position where they have to hide themselves ... There is an attempt to repeal the current policy for transgender service members for no other reason than politics and discrimination against a marginalized group of people who simply want to do their jobs, serve their countries and take care of their families."