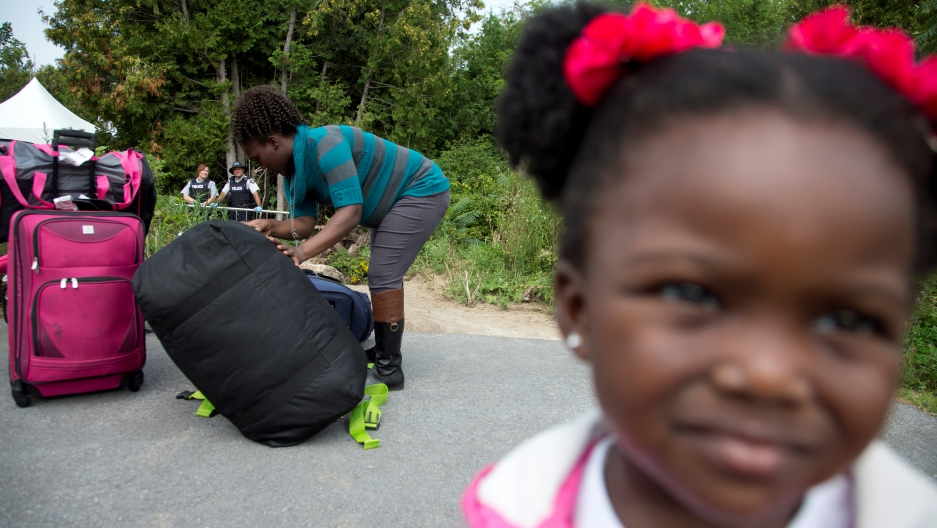 A mother and her young daughter are watched by Royal Canadian Mounted Police officers as they prepare to cross the US-Canada border from New York into Québec earlier this month. Like thousands of others fleeing the US for Canada, the woman told officials she was from Haiti.

Among the first items unloaded from a yellow school bus that had just pulled up outside a temporary shelter at a Montreal YMCA on a recent Sunday afternoon was a child’s pink suitcase.

After the bags came passengers of all ages, including a heavily pregnant woman with a toddler over her shoulder.

People called to each other in Haitian Creole.

The newcomers are among more than 6,000 mostly Haitian asylum-seekers who have illegally crossed the border from the US into Canada since the inauguration of President Donald Trump.

Officials here in Québec say more than 3,800 people crossed in the first half of August alone, an average of roughly 250 a day, the highest rate since officials began tracking the influx in January.

The migrants have come hoping to find safe haven in Canada, with many hoping to settle among Québec’s large Haitian community.

“The United States is a beautiful country,” said Michael Jean-Pierre, who had been living at the YMCA for just over a week after traveling from Pompano Beach, Florida. “The reason I left is because the government wanted to deport immigrants. I was very, very afraid of the deportations there.”

Many of the migrants decided to leave the US after the Trump administration indicated it might let the Temporary Protected Status granted to many Haitians after the 2010 earthquake there expire in January 2018.

Related: DHS extension of protected status for Haitian immigrants might be the last

Ending the program would allow the US government to send 58,000 people registered with TPS back to Haiti this coming January.

Like many others, Jean-Pierre read on social media that Haitians would be welcomed north of the border.

“On Facebook,” he said, “I saw a lot of messages from people explaining how the government of Canada will receive Haitians here with a lot of love, a lot of wisdom. That’s why I came here to seek my refugee status.”

Since most migrants like Jean-Pierre would be turned away at official border crossings, they have been walking across elsewhere.

Once inside the country, they’re being detained and processed in a camp on the border built by the Canadian military and managed by the Red Cross. From there, the government has been sending many on to shelters in Montreal.

Despite the encouraging messages circulating online, though, their future here in Canada is uncertain. Canada’s acceptance rate for Haitian asylum-seekers has historically been slightly higher than the US, but it could be difficult for those arriving from the US to prove they face imminent danger in Haiti after years living abroad.

The country’s extreme poverty is not itself grounds for immigration relief.

Further complicating things is the fact that many of the children among the asylum-seekers are US citizens, born since their parents came to America.

With different citizenship and different immigration status, some families could be separated. 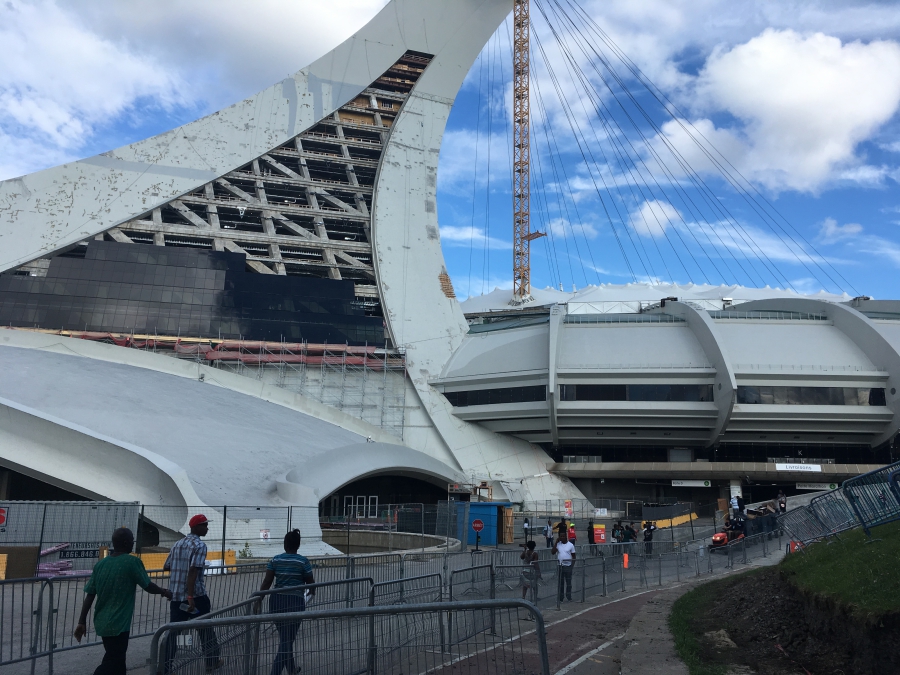 Many migrants seeking asylum in Canada after leaving the US are staying in temporary shelters in Montreal, including a 900-bed facility at the city's Olympic Stadium.

For now, Montreal has set up several temporary shelters for the wave of refugees, including one with 900 beds in the city’s old Olympic Stadium.

Related: Montreal's Olympic Stadium turns into a welcome center for refugees from the US

The newcomers are often welcomed with offerings of food from members of the local Haitian community. On that recent Sunday, two men brought a trunkful of bread from the bakery where they work, while an older woman arrived with bags of Tupperware full of rice and meat.

The woman said that while the government would decide whether or not the refugees could stay in the country, she felt she could make this small contribution while they wait to find out.

Other new arrivals were greeted by family members who whisk them and their suitcases away to their homes.

A Nigerian journalist named Precious, who asked that his full name not be used for security reasons, was among those of other nationalities who have crossed the border. He said he went to the US last September to escape threats over his reporting, and that at first he and his family felt safe there.

“It was actually after the election, when Trump came in, that it really became something different,” Precious explained.

He says he had a valid press visa but that his wife and daughter had overstayed their visas and were afraid of being deported. So, the family joined the stream walking to Canada to try their luck here.

“I will say God bless Canada,” Precious said, “because it's a place where our fears have been relieved, for now.”

“For now” is likely to be at least several months as the Canadian government works through the surge of applications for asylum.