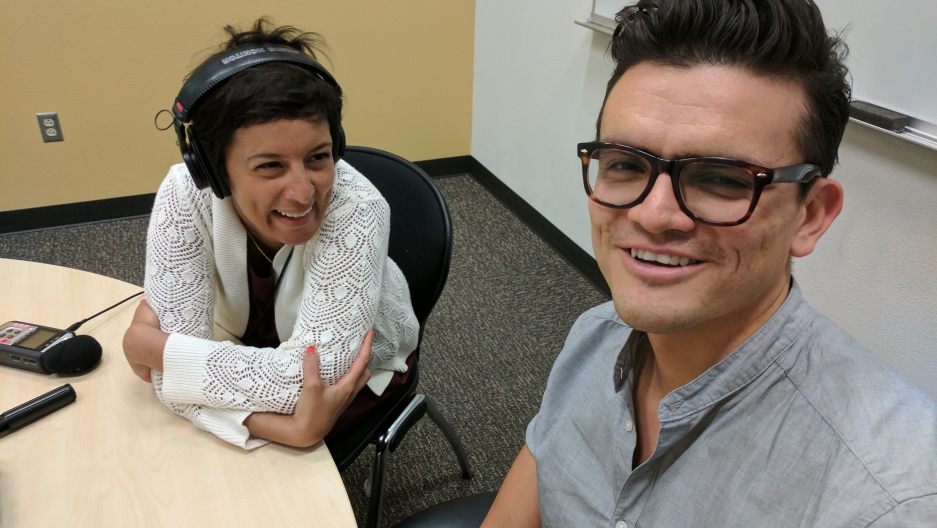 Reporter Rupa Shenoy sits with Luis Valdez, a former Tucson Mexican American studies student who says the program put him on a path that led to his recent completion of a doctoral degree in public health.

When a federal judge in Tucson ruled a state law unconstitutional this week, it ended a 10-year saga that once consumed Curtis Acosta's life — but also led to ethnic studies programs across the country.

“This has been a hard journey to get to this point,” Acosta said when we met last month, the same week he was testifying in the case and under a gag order. "It's like, 'don't mess it up now.'"

It was the second time Acosta had gone to court in an attempt to restore Mexican American studies at Tucson Unified School District. The first suit, brought by him and other teachers, failed to overturn the 2010 law that targeted the program, which Acosta designed to help Tucson schools comply with a federal desegregation consent decree.

When he and others were teaching the program in the 2000s, they had students recite “Tú eres mi otro yo” (You are my other self) — a poem about mutual respect — every day. Acosta had students read stories that are often missing from mainstream classes — about gay people, feminists and people displaced by conquerors. In class, he liked to rap his lessons and use examples from pop culture. All of it was aimed at getting kids to see themselves in history and respect themselves as scholars.

“It was a struggle trying to convince students that they have this ability to be scholarly when they've been told their whole lives that they're not,” Acosta said.

“My mind was completely blown,” he remembered. “It sort of felt like we were breaking into this thing that we weren't supposed to be in and positioning ourselves within it.”

Valdez started reading for the first time, beginning with a book called “The Pedagogy of the Oppressed.”

“It was the first sort of piece of literature that I actually remember taking pen and highlighter to and highlighting things,” he says.

So things were good. Until one day in 2006, when labor organizer Dolores Huerta gave a speech at a Tucson Magnet High School, and said, "Republicans hate Latinos.”

Tom Horne, then the state superintendent of public instruction, was incensed. He called Huerta’s words “hate speech.” Horne brought in another speaker who said Republicans don’t hate Latinos. Students turned their backs, raised their fists, taped their mouths and walked out.

“There’s a picture of me — there’s Horne that’s standing right there and [I have this] raised fist,” Luis said.

Horne said the display was rude, and he decided the Mexican ethnic studies classes had taught students to be disrespectful. He called for the program’s elimination.

“This is an absolute abuse of taxpayer money,” Horne said on CNN’s Anderson Cooper 360. “They sent up a bunch of students to testify at the state legislature. And a girl was testifying and a state senator said 'couldn’t you learn these things in other courses?' And she said 'no, before I took this course I didn’t realize I was oppressed. Now that I took the course I realize I’m oppressed.' We should be teaching the kids that this is a land of opportunity and not teaching them the downer that they’re oppressed, should be angry against their government.”

Apparently, the state legislature had the same concerns. Lawmakers passed HB-2281 in 2010, a bill that cut funding for school districts with classes that advocated "ethnic solidarity" or "promoted resentment toward a race or class," or the government.

Associate professor Nolan Cabrera from the University of Arizona’s Center for the Study of Higher Education was called in to analyze the Mexican American studies program. He found that students who took the program got better overall test scores and graduated at some of the highest rates in the district. He told the Tucson School Board they shouldn’t cut the program. They didn’t listen.

"The TUSD board voted to eliminate the program and it was very, very heavy handed," Cabrera recalled. "Representatives from the district came into classes, removed what were considered objectionable materials. The people who had been teaching Mexican American studies were told 'monitors will pop in your room unannounced at any given moment.'"

One of the monitors sent into classes cited Acosta for calling students “mija” or “mijo” (my daughter, my son), saying it was unprofessional.

"This is when you started seeing what we're talking about when we explain that education has a history of having European American middle-class values as normal," he said. "'Mija' and 'mijo' for us, that’s a term of endearment, and it’s a term of connection, culturally."

Horne, the former state superintendent of public instruction, became the state attorney general and personally argued the case brought by Acosta and the other teachers. But the court found teachers couldn’t choose what they wanted to teach.

Eventually, Acosta tried to move on. He joined the University of Arizona and helped create ethnic studies programs across the country that have since flourished. But Tucson students didn’t give up. This summer, their new case against the state law that targeted Mexican American studies made it into court. Acosta, and a lot of people from the first case, were called to testify again.

“There's been times where I felt I lost my country,” he told me. “Having to re-engage with all of that again — it's been really difficult. Really difficult.”

This week, federal appeals court Judge A. Wallace Tashima struck down the state law, saying it was motivated by anti-Mexican American attitudes and, “a desire to advance a political agenda by capitalizing on race-based fears.”

Horne responded in a statement, saying “the proper role of the public schools is to bring together students of different backgrounds and teach them to treat each other as individuals. This decision promotes a program that does the opposite: divides students by race and promotes ethnic chauvinism.”

I checked in with Acosta, Cabrera and Valdez.

“I’m pleasantly surprised,” said Cabrera, the University of Arizona associate professor. “I’m so used to both overt and covert racial animus driving so much state policy and state rhetoric in Arizona, and now in the nation as a whole.”

Valdez, the Mexican American student from a trailer park, just got his doctoral degree in public health — an achievement he says ethnic studies put him on a path toward. He was happy about the judge’s decision, but said it was bittersweet.

“This law and the implications of this law did so much more damage to the community than they could’ve ever imagined,” he says. “So it feels like so much time and energy that could’ve been better spent.”

That was something Acosta talked about too — how many students missed out on taking Mexican American studies because of this state law. But he said the whole 10-year fight was worth it.

“Reading Judge Toshima’s language is amazingly validating and affirming,” he says. “And to be honest, we wanted to win, but I never thought I would feel that me and my colleagues were validated. I just wanted people who we knew did wrong by our students and our community to be held accountable.”