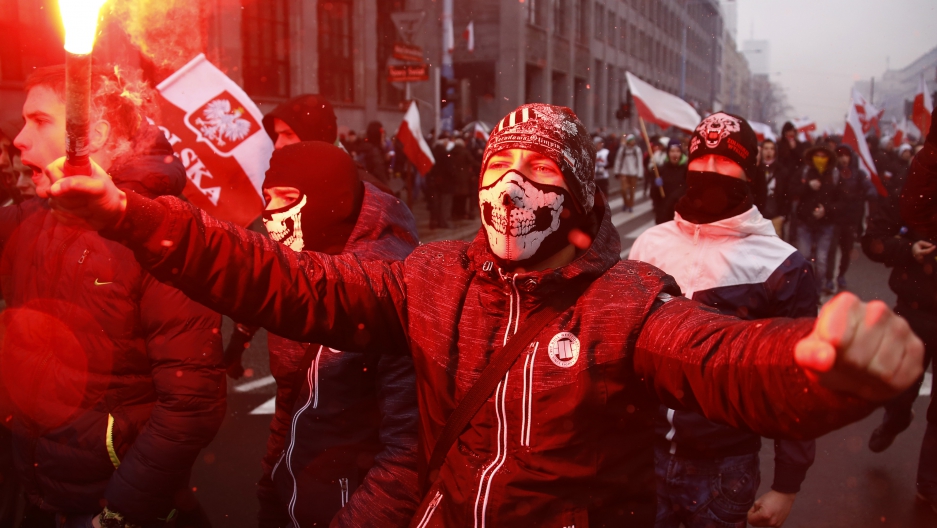 Protesters light flares and carry Polish flags during a rally, organized by far-right, nationalist groups, to mark the anniversary of Polish independence in Warsaw.

Following deadly confrontations at a white nationalist rally in Charlottesville, Virginia, President Donald Trump’s assertion that "both sides" were to blame for the resulting violence drew outrage and condemnation. His critics say there’s evidence that his remarks embolden and encourage white supremacists throughout the country.

Anna Stefaniak works at the University of Warsaw’s Center for Research on Prejudice. She sees parallels between the political climate in the US and in Poland.

The migrant crisis, and subsequent Islamophobia, in Europe had been growing for several years, but reached its peak in 2015, the same year as Poland’s election. The right-wing populist Law and Justice Party won a majority in parliament, supported by voters with authoritarian views, a strong sense of relative deprivation — the sense that their economic situation was worse than other groups — and with anti-immigrant sentiments.

The Law and Justice party in Poland and President Trump campaigned on similar messages of populism and nationalism, and many saw the party's victory as an indication that Poland was headed in a more nationalist direction.

That prediction that was justified when the Law and Justice Party butted heads with the European Union, took control of state media and attempted to seize power from the courts.

White nationalist sentiment has also surged since the election.

“We now have several [white nationalist] groups in Poland that that are gaining prominence and are supported, more or less openly, by the ruling party,” said Stefaniak.

There are no official numbers on how many white nationalist rallies have been in Poland since the 2015 election, but Stefaniak says she’s noticed that swastikas and other neo-Nazi symbols are increasingly visible at demonstrations. Even confederate flags have made an appearance.

There’s also been a measurable uptick in hate crimes and hate speech.

Data from the Polish police and the national prosecutor’s office show a sharp spike in hate crimes since 2014, one year before the Law and Justice party came into power. Stefaniak says Muslims in particular have been the targets of violence, though there is no data on whether the perpetrators were members of far-right organizations.

The Center for Research and Prejudice conducted two studies, in 2014 and 2016, with Polish teens ages 16 to 18, and Polish adults 18 and older. The two groups were asked about the frequency with which they heard hate speech. Both groups saw a huge increase in hate speech in traditional media and in their private lives. Polish youth in particular reported seeing hate speech on the internet increase from 50 percent in 2014 to anywhere from 75 to 80 percent in 2016.

The studies also found that Poles were beginning to get desensitized to hate speech. “Things that were not acceptable to be said in public are now acceptable,” said Stefaniak.