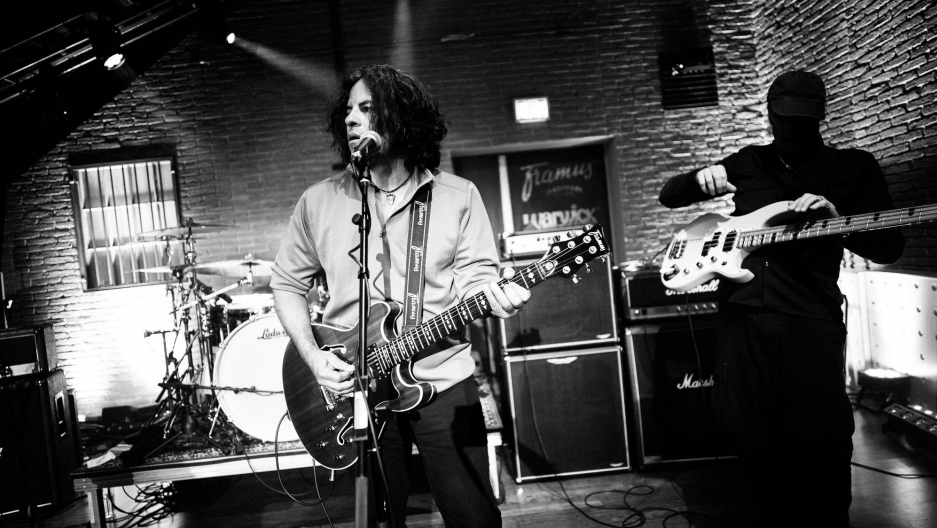 Stevie Salas recalls poring over the liner notes of albums like Rod Stewart’s “Atlantic Crossing” as a middle schooler and spotting a familiar name: that of guitarist Jesse Ed Davis. “I'd see there was a song written by Jesse Ed Davis. Jesse Ed Davis — I'd see that name everywhere,” he says, “having no idea he was a Native American man.”

For Salas, who is Apache, the missed connection is noteworthy. He grew up to become an acclaimed guitarist himself and has performed all over the world with artists like Mick Jagger, George Clinton and Rod Stewart. Early in his career, Salas toured with Stewart's band. He says he even learned Jesse Ed Davis’s guitar parts — still without knowing Davis’s ancestry, and all the while searching for other Native American musicians out there.

“I was in this massive band playing, you know, five nights at Madison Square Garden,” Salas says. “But I just didn't see anybody that looked like me. I mean, I just started getting curious, that’s all. So, I started to do a little digging on the subject back then and where people were from.” Now, watching footage of Davis playing alongside George Harrison and Eric Clapton at the 1971 Concert for Bangladesh, Salas can’t believe he didn’t realize sooner.

“Jesse was a big, big man,” he says. “So you’ve got this big, gigantic Native American man standing right next to Clapton and right next to George Harrison,” he says. “I'm thinking, how did I not look at that footage my whole life and go, ‘Who's that Indian on the stage there?’ Because it's so obvious now that you know.”

Salas eventually co-curated a Smithsonian exhibition, "Up Where We Belong: Native Musicians in Popular Culture," which had its first showing in 2010.  Now, he’s the executive producer of a new documentary, “Rumble: The Indians Who Rocked the World.” Featuring rockers like Jimi Hendrix and Robbie Robertson, delta blues pioneer Charley Patton, jazz singer Mildred Bailey and other icons, the film traces the long — and long unsung — influence of Native artists on the American musical landscape. As director Catherine Bainbridge told The Guardian, “This is buried history.”

The film shares its title with “Rumble,” a groundbreaking rock song released in 1958 by Link Wray, a musician of Shawnee ancestry. “It's the song that first invented, really, the distorted power chord,” Salas says. Despite having no lyrics, the song was deemed so potent that some radio stations banned it to avoid stirring up violence. Nevertheless, Salas says, it managed to influence some of the biggest names in rock.

“You've got this distorted thing coming out of the guitar that Pete Townshend is freaking out [about], that Jeff Beck told me him and Jimmy Page would play air guitar to that song,” he says. “And so it influenced everybody that influenced me.” But as their stars rose, he notes, “they go on and Link Wray sort of goes off into obscurity to the public.”

“Rumble,” however, is not just a rock story. In the course of research, the film team teased out connections between Native American musicians and rhythms and genres like the blues. When digging into the story of delta blues legend Charley Patton, “we started to find those quotes, like from Howlin’ Wolf and so on [that] ‘this Native American guy taught me how to play guitar,’” Salas says. (Historians believe Patton was of Choctaw heritage.) “And you started to realize that what was really going on was the birth of our nation — and music being a byproduct of it, was all these cultures being mixed up.”

That mix can still be heard in the blues, Salas points out. “Catherine really found that stuff and pulled it out,” he says. “So, the beat on the guitar would be your drumbeat, and you'd have your four-on-the-floor, [it's] like your powwow beat, and then you'd have your African polyrhythms mixed in there. And all of a sudden, that’s the sound of the blues, isn't it?”

Initially, Salas says, he wanted the project to spotlight role models for the Native American community. “I knew that these musicians would prove that, look, anything is possible,” he says. “These guys did it, especially in times where you could get killed for it, right?”

“But then what happened was once Catherine started digging deeper into the history — and even the Smithsonian, big-time in the Smithsonian, actually, I should say — we started to realize that we were unearthing some American history that [had] never been told, that never was known,” he says.

This article is based on an interview that aired on PRI's Studio 360 with Kurt Andersen. You can hear a playlist of Salas’s favorite songs by Native American musicians on the interview page. Find a screening of “Rumble” here.