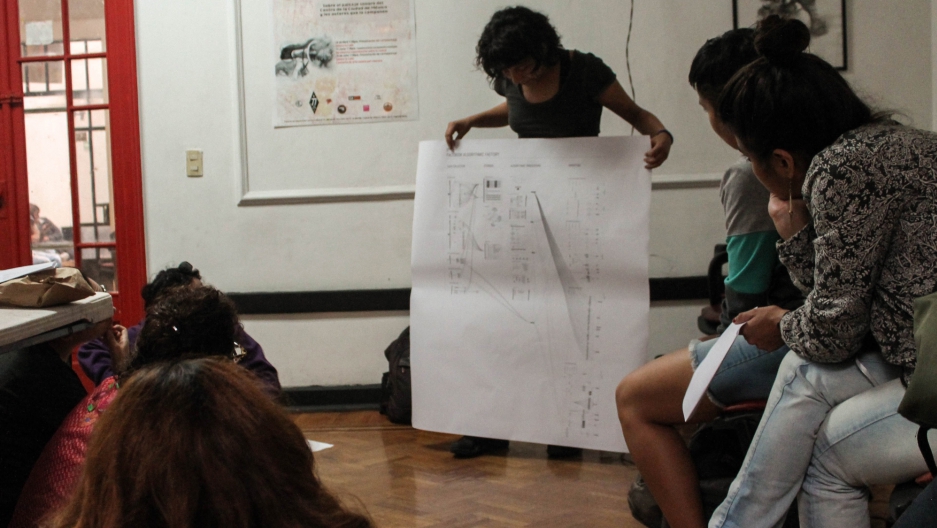 Mexican women facing increasing harassment online are attending a workshop in Mexico City on how to deal with and protect themselves from digital violence.

She has a question for them.

“How many of you have had to purge your Facebook page?” she asks. “You know, deleting photos, unfriending people you don’t know.”

After a pause, almost every woman’s hand up goes up. Nervous laughter spreads across the room.

On a rainy Thursday afternoon, the Facebook Anonymous workshop, organized by the Ciberseguras (“Cyber-secure women”) collective, is packed. The workshop opens with the attendees, women in their 20s and 30s, sharing personal experiences with the social network.

Ciberseguras began hosting women-only online security workshops in 2016 to have a safe space to discuss and address digital violence. Today, the participants share experiences of online harassment, stalkers and losing control over their personal information online. Every participant has a chance to speak, and every question, no matter how small, gets addressed.

“We are not interested in scaring people about digital security. There are already so many fears women face in Mexico,” says Cornelio, who works for the Mexico City nonprofit SocialTIC. “What we do is share information that will help break down those fears.”

Threats on many fronts

In July, The New York Times reported that the Mexican government uses Pegasus spyware technology to monitor activists and journalists. While state-sponsored hacking grabs headlines, Ciberseguras has found that women face online abuse on many fronts.

Members of SocialTIC and representatives of the Take Back the Tech campaign began meeting in 2013 and launched Ciberseguras as a blog to share resources to combat online abuse. While the problem was increasingly common, many women didn’t know where to turn for help.

“Just like other forms of violence against women, the victims are judged,” Cornelio says.

Even though millions of Mexicans still lack internet access, the country boasts 50 million social network users. There is no national data on the prevalence of online harassment of women, but high-profile cases in the past three years have put feminist organizations on alert. The phenomenon is so common, women have coined a term for the attackers: machitrolls.

Often, women who break taboos and speak out against physical violence are attacked online. In one such case, four men attacked Sen. Ana Guevara, an Olympic athlete who was riding her motorcycle outside Mexico City in December 2016. When photographs of her injuries circulated online, trolls and bots began tweeting them with hashtags like #SiNoTeGolpeaNoTeAma ("If he doesn’t beat you, he doesn’t love you").

In March 2016, US journalist Andrea Noel tweeted about an instance of street harassment she faced in Mexico City. When the post went viral, Noel was inundated with violent threats, some of which included her physical location.

Mexico is one of Twitter’s top 10 markets, with 10 million registered users, but Amnesty International has called Twitter’s policing of spam and abuse for Spanish-language users “patchy at best.”

Mexico has a cybercrime unit within its National Security Commission, but online harassment is only one part of its broad mandate. Because both the government and Twitter and Facebook administrators have fallen short of protecting those most vulnerable to online abuse, Cornelio says women experiencing harassment are more likely to turn to their own contacts.

When Ciberseguras started in 2013, Edward Snowden was making headlines worldwide. But in Mexico, high-profile hacking and spying cases had yet to be revealed.

“It was hard starting out. We really struggled to convince people this was an important issue,” Cornelio says. “We had suspicions about the government spying, but now we have the proof.”

Over the years, interest has soared. In addition to hosting workshops, Ciberseguras supports women and feminist organizations that have been targeted. Cornelio says she is contacted by at least two women every week who are being targeted. They document and trace the sources of the attacks and work with women to develop stronger security protocols. Female bloggers and abortion rights activists are particularly subject to attacks.

Grassroots digital security groups are growing in Mexico. They network with other activists in Colombia, Bolivia, Brazil, Ecuador and Guatemala. Many resources are only available in English, and the network is gradually developing more Spanish-language cybersecurity guides.

“We’ve found that the online machistas  [male chauvinists] are really well-networked, so as feminists we need to share information even more effectively,” says Cornelio.

At the Facebook Anonymous workshop, the facilitators walk through Facebook’s privacy settings, explaining how to check the locations where your account has been accessed, control who can view your posts and photos and how to set up two-factor verification for logins. Other workshops have covered the basics of encryption and using secure browsers like Tor.

Ciberseguras stresses that consistency in using even the most basic security measures is more important than learning advanced tools and then lapsing back into old habits. They encourage experimentation and trial and error to find the tools that make sense for each individual or organization.

Silvia, 30, an attendee at the Facebook Anonymous workshop who didn't want her last name published out of concern she would make herself a target, says that for her work in public relations, she must be familiar with social networks. She came to the workshop to learn new tools.

“For me, the important thing is helping other women,” she says. “So many people don’t know about these tools to protect yourself. You can start with the people close to you and go from there.”